A conversation with Rupert Grint 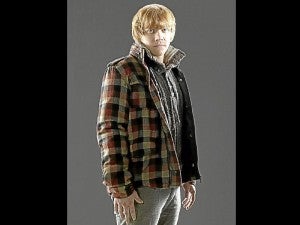 ‘It’s the right time to move on, and I’m ready to do different things’

Did the cast and crew do anything special on the last day of shooting?

Yeah, they played a video. We did this thing called the Golden Board. It’s basically a big countdown. This film was like 260 days or something. Every day we had this board, like “day one,” “day two,” and each time it would be a silly saying and stuff. They kind of edited all that together and it was just really nice to see that. It was actually quite emotional, too.

We heard your birthday happened during shooting. Tell us about that.

It was cool. It was my Golden Board. They set up a piñata in the Weasley house and I was trying to hit it and, yeah, that was quite good.

Within this family of Harry Potter, you also have the Weasleys. Do you guys feel a certain bond in terms of this being your on-screen family that will always be close?

Yeah. Definitely. We have Julie Walters, ’cause I’ve worked with her before outside of “Potter,” and she, naturally, is quite a motherly type and she’s seen us grow up as well. And she really kind of cares about us. The twins as well. I’m really good friends with them. I see them quite regularly, yeah, so we’ll always kind of see each other.

Is there any particular scene in all the films that you wish you could have been in, even as a different character?

I think, in the sixth film, I really liked the scene with Harry and Dumbledore in the boat. That was really cool.

Do you have ideas about maybe directing some day, or what you might like to do 10 years from now?

Directing’s a nice idea, but in 10 years I’m not sure. I definitely want to keep on acting, and just do different roles. I’m looking forward to that.

You’ve had quite a variety of roles in 10 years, between “Harry Potter” and some of the other films you’ve done. 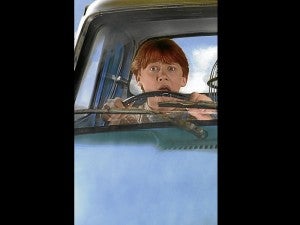 I’m quite keen. I’m always going to miss “Harry Potter,” but it’s the right time to move on and I’m ready to do different things.

Have you any other projects lined up in the near future?

Yeah, there are a few things; nothing definite yet. But it has been nice just to have a break now. This last film was really exhausting and I haven’t been on holiday for, like, three years, and it was nice to kind of finally do that.

They’re going to be turning the studio into a museum. Have you thought about that?

I know, yeah. They said they were going to make replicas of our dressing rooms as well so people can see them. It’s just quite a weird thought, but yeah, that’s great. I mean, it’s such a special place to us because I’ve spent more time there than my own home, really, and to know that it’s going to live on is really great.

You’ve bought some outrageous things in the past. You mentioned a mini-ice rink? What’s some of the items have you purchased that are not sort of everyday items?

I supposed I’ve got some weird things. The latest thing is, we’ve got miniature donkeys. They’re just like normal donkeys, but kind of half the size.