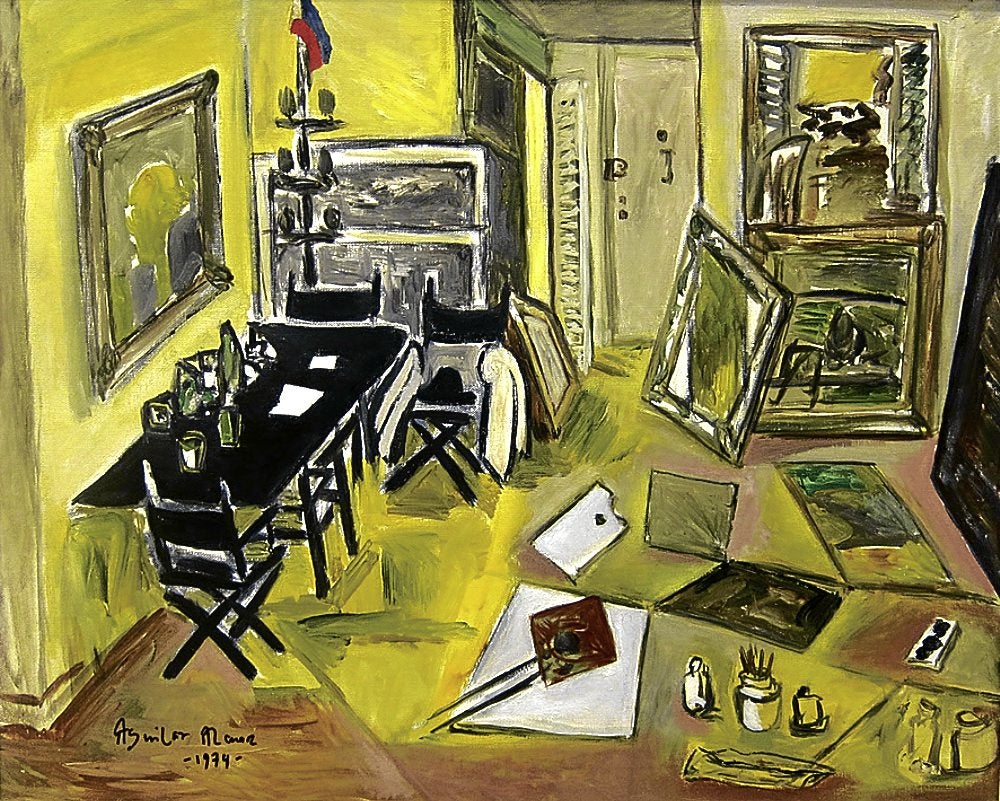 This titan of Philippine visual art was recognized for having influenced an entire generation of artists with a body of work that is critically lauded both here and abroad. Alcuaz had the soul of an artist, yet attained the pinnacle of mainstream artistic achievement. His complex and nuanced personality—music-lover, bon vivant, astute observer of the world around him—had cemented his legend as an artist without peer.

This week would have been the 80th birth anniversary of Alcuaz, one of the pillars of Philippine modernism. Unfortunately he never reached this milestone. On a sad Thursday morning, a little less than a year and a half ago, he was found by hotel staff slumped in his suite, having expired from natural causes.

That untimely death has renewed interest in this towering figure. In his 55-year career, Alcuaz was one of the most awarded and acclaimed Filipino artists on the international scene. He held exhibits in Spain, Portugal, Germany, the United States, Poland and Singapore. His works were among the earliest works by Philippine masters sold at the top auction houses Christie’s and Sotheby’s.

To show the various facets of this master’s art, Galerie Joaquin (tel. 632- 7239418; [email protected];  www.galeriejoaquin.com), in partnership with the estate of the artist, will hold an exhibit, “Remembering Aguilar Alcuaz,” at L/4, SM Megamall Art Center, Bldg. A, Mandaluyong City, June 7-19.

There will be an authentication session on Saturday, June 9, 1-5 p.m., also at the  Art Center. The manager of the estate and son of the artist, Christian Aguilar, will be verifying the authenticity of works.

Alcuaz had raised high the banner of Philippine achievement and garnered recognition for his country as early as the mid-1950s. While based in Spain, he won the Premio Moncada in 1957 and the Prix Francisco Goya. In Barcelona, he won First Prize at the Pintura Sant Pol del Mar in 1961, and Second Prize at the Premio Vancel at the Fourth Biennial of Tarrasa in 1964.

In France, he was awarded the Diploma of Honor at the International Exhibition of Art Libre in 1961; bestowed the rank of Chevalier for Arts and Letters in 1964; and accepted into the Order of French Genius in 1964.

In his own country, he was, in 1965, recipient of the San Beda Outstanding Alumni award as well as the Republic Cultural Heritage Award. In 2001, he was given the Outstanding Manileño award. In 2005, he received the Presidential Medal of Merit Award. In 2009, after an extensive three-year vetting process, he was granted the rank of National Artist.

Art came naturally to Alcuaz. Even while he was in grade school, his teachers already noticed he was very talented.  He drew and sketched endlessly, sometimes sketching people from memory. He became a favorite of his teachers, as he would draw and gift them with their portraits.

Music, too, was a great influence. Alcuaz came from a family of musically inclined and talented people. His father, Mariano, although a lawyer, could play the piano and violin, as did his siblings. Mariano encouraged the young Federico to play the cello.

While pursuing a pre-law course at San Beda, Alcuaz cross-enrolled at the University of the Philippines School of Fine Arts, where he had as professors National Artists Fernando Amorsolo and Guillermo Tolentino. Juvenal Sansô and Araceli Dans were a year ahead, while National Artist Napoleon Abueva was his classmate.

From his paintings and portraiture, Alcuaz earned a tidy sum that helped finance his studies and gave him sizeable pocket money. He went on to pursue a law degree at the Ateneo College of Law.

Then, he decided to accept a scholarship in Spain from the Spanish government. Artist and philanthropist Fernando Zobel helped him secure the scholarship.

For nine years (1955-1964), Alcuaz made Barcelona his base. He worked, honed his art and maintained a studio on the fourth floor of 285 Aragon St.

Though he had to come back home to Manila for  recuperation after a near-fatal accident on a European freeway in 1964, Alcuaz maintained his Barcelona studio until 1997, or  a little over 40 years.

In Barcelona, he formed a group of Catalan artist-friends and intellectuals. They would meet regularly at La Punalada, a restaurant along Paseo de Gracia. This informal discussion and get-together was called a tertulia, and the La Punalada group was one of the most influential and trailblazing among the artist groups in the city.

The group was founded by artists who rebelled against the conservatism of the old Salon artists. Among Alcuaz’s contemporaries were Jaume Muxart, Jordi Aluna and Sergio Aragones—today pillars of Spanish modernism.

Alicia Coseteng wrote that with such contemporaries, the group “began to identify themselves with the neo-figurative movement, by then gathering momentum in France, Italy and Spain. They became the Spanish ‘neo-figuratives,’ following in the spirit of the great Spaniard—Picasso.”

Jack Teotico, writing for Contemporary Art Philippines magazine, noted that “Federico Aguilar Alcuaz lived in the Spanish city during a glorious time in its cultural history.”

This was also where the artist met Ute Schmitz, a spirited and genial German. Romance blossomed and the two got married in Barcelona.

The tertulia, Teotico said, “was a regular informal social gathering where issues of common interest were discussed. It was an artists’ get-together. In Alcuaz’s case, his tertulia was exclusively for members only. They would have good food, wines, cheeses, good bread—items that found their way as subjects in his still-life paintings. The topics of informal discussion invariably revolved around trends in art, changes in society, politics, or even the latest gossip.”

From his Barcelona base, Alcuaz had exhibits in noted galleries such as Maragall Gallery as well as Galerias Layetanas, Galerias Manila Barcelona and Galerias Vayreda Barcelona. Occasionally, Spanish surrealist painter and sculptor Joan Miro’s exhibitions occurred at the same time as Alcuaz’s.

He also exhibited  in Portugal and in France. Alcuaz loved traveling. He traveled to Santander in Galicia or Lisbon, and loved going to the Costa del Sol area in Andalucia and the Mediterranean coast. The plants, structures and fruits he saw there would find their way into his dramatic, latter-year Barcelona paintings.

Alcuaz was on his way to Germany when the vehicle he was in figured in a  crash. He had to return to Manila to heal. But soon after, he was again busy on the art scene. Exhibits at Luz Gallery came, followed by a 10-year retrospective exhibition at the National Gallery.

Then he was off to Japan, exhibiting at Itoh Gallery in Tokyo. This was followed  by an exhibit at Malacañang Palace  and a second one-man show at Luz.

Since then, Alcuaz divided his time working in his corner suite at the Manila Hilton along United Nations Avenue in downtown Manila, and in his Barcelona studio at Aragon St.

His art took him all over the world, with New York as his other favorite location. The artist enjoyed the bustling art scene there, and he loved  painting the cityscapes of New York. He was also in Japan, Austria, Germany, the Netherlands, or wherever his spirit would take him.

From 1968 to the early 1980s, Alcuaz traveled to Czechoslovakia,  to a town outside Prague, where he started working on his monumental tapestries. He enjoyed mingling with the workers and returned every year to have his tapestries made.

Aside from his tapestries, Alcuaz has come to be known for his “Tres Marias,” his Manila landscape series, portraits and his abstracts. After he closed his Barcelona studio, the artist brought back outstanding works of art that are now referred to as his Barcelona series.

His “Tres Marias” series was started in the late 1970s. It is similar to the Three Graces, a subject that has inspired many great artists throughout the history of Western art. He used as models hotel staff and waitresses of the different outlets of the Manila Hilton, and immortalized them on his canvases.

He first started expressing interest in landscapes, following his professor Toribio Herrera at UP. He began by painting barong-barongs, then progressed to the cityscapes of New York, before concentrating on the urban landscapes and skylines of Manila.

Rod. Paras-Perez described him as the “epic troubadour of the urban landscape.” These landscapes were painted from a high vantage point, usually from his hotel room or from a tall building.

His abstract works were inspired by neo-figurative concepts from his La Punalada group. His ceaseless travels introduced him to a world where Picasso, Jackson Pollock, Kandinsky, Matisse and De Kooning proved to be indelible inspirations.

His art lives on in the minds and hearts of art lovers not only in the Philippines but also in other parts of the world that were graced by his presence.

Duffie Osental is the editor-at-large of Contemporary Art Philippines magazine.