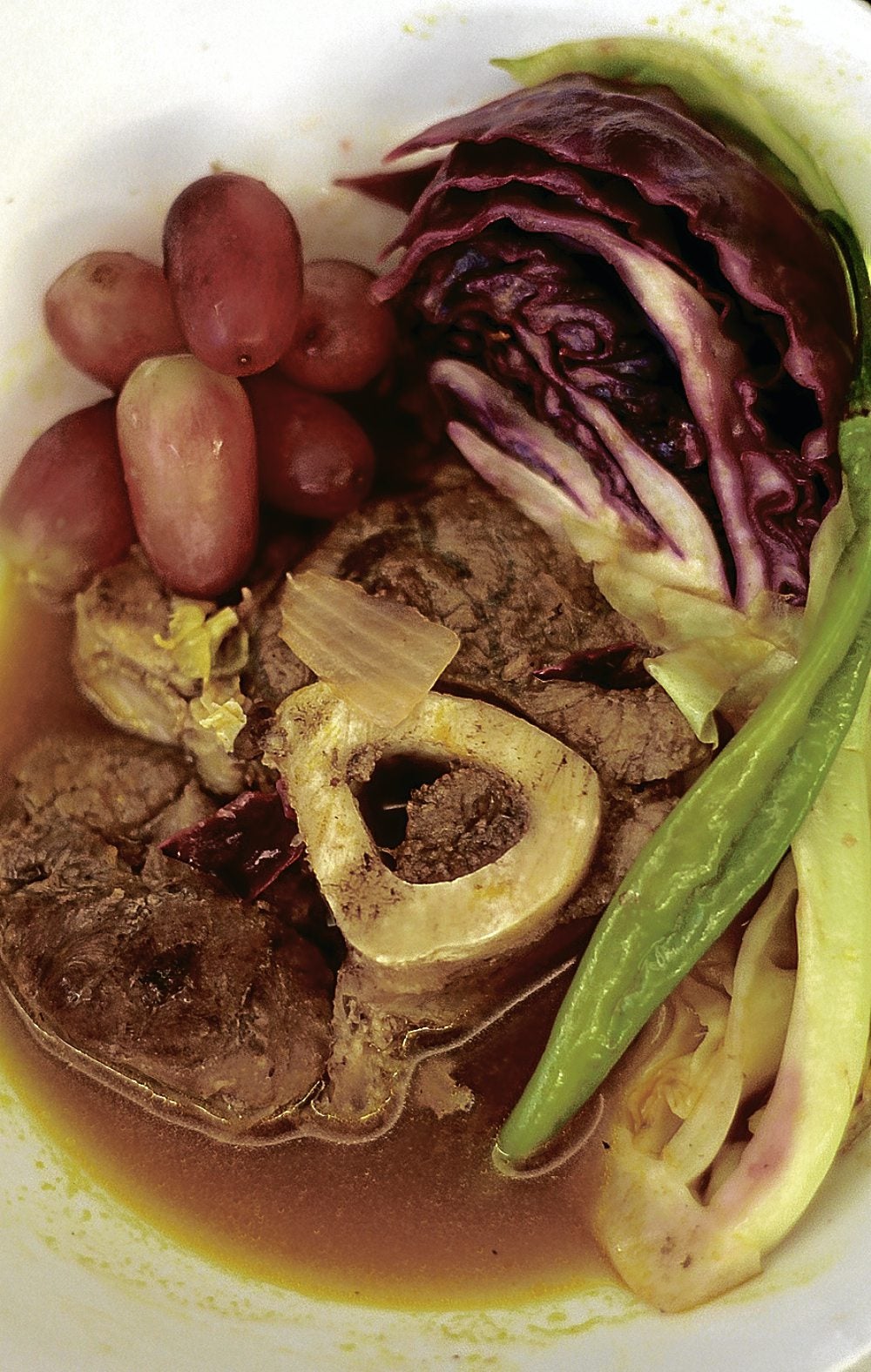 Leave it to young chefs to give classic Filipino dishes an interesting twist.

Unilever senior assistant manager Jeremiah Ty said the chefs were chosen for their culinary skills as well as their affable appeal—moms and yuppies who cook could instantly relate to them.

Over lunch at Romulo Café in Makati, they discussed their innovations.

Encarnacion is an instructor at the Center for Culinary Arts. He also hosted a cooking segment in the morning show “Unang Hirit” on GMA 7.

He surprised us with his take on the bulalo. Instead of doing the traditional nilaga which involves slow-boiling the beef shank with marrow in a big pot of water, he made Sinigang na Bulalo—with red grapes.

The fruity kick from the grapes counters the richness of the meat. It gives the soup slight sweetness, which saba-banana slices usually provide in the nilaga.

This was one of his kitchen experiments that turned out well.

“I first used yellow watermelon, but it became soggy. I tried grapes and it worked well.”

He also seared the beef in hot oil before adding water, and used a pack of Knorr Sinigang sa Sampalok instant mix as souring agent.

Agustin is the heartthrob actor who now does cooking shows. He took up culinary courses and, with business partners, established restaurants such as Oyster Boy, Sumosam, Johnny Chow, John and Yoko, and Mr. Kurosawa.

Like a typical Kapampangan, he has innate interest in food and talent in cooking. For the launch, he made a combo of Ilocano dishes—Pinakbet with Baked Liempo.

His pinakbet has Knorr Shrimp Cube and tomato paste instead of bagoong. The liempo, which is as crunchy as the deep-fried bagnet of the Ilocanos, is marinated in patis or fish sauce and white pepper, then baked until brown. Agustin lists Italian pasta, cocido and paella, and beef tapa as his other specialties.

“My friends who go abroad always ask me to make tapa they can store. It’s simply spiced with salt and pepper, but I need a good cut of beef,” he said. “I made kilos of beef tapa on my recent trip in the US.”

Chef Jickain is executive chef of Station Juan Café in Boracay and food editor of Queue Magazine. He made Organic Sagada Rice Paella with Seafoods with Knorr Chicken and Shrimp Cubes.

We also love chef De la Cruz’s fish dish—Lapu-Lapu Escabeche. The fish is seasoned with Knorr All-in-One + Meaty Seasoning, then deep-fried. The Oriental sweet-sour sauce has ginger, catsup, sugar, Knorr Fish Cube, julienned carrots and bell peppers. It is poured on the fried fish just before serving to give it a good glaze.

Season beef with salt and pepper, and sear both sides in hot oil in a casserole or pot.

Remove seared beef; set it aside.

Using the same pot, saute onions, pour water and return seared beef into the casserole. Bring to a boil and simmer until beef is tender. Add water if needed.

Season with fish sauce and pepper. Add cabbage leaves and simmer for a minute or two. Garnish with seedless grapes and serve.

To serve, put blanched  snow peas  and green beans on a plate, top with the pumpkin stew and tofu strips. Place chopped pork belly on the side.

Oil for frying, as needed