Half of cops in Camp Crame are overweight | Inquirer Lifestyle ❮ ❯ 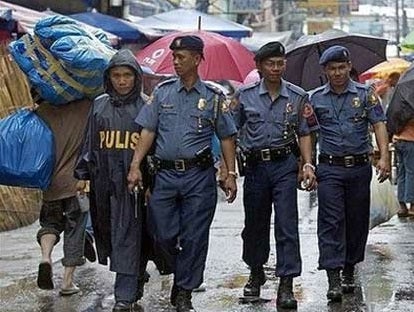 Half of cops in Camp Crame are overweight

MANILA, Philippines—More than half of all personnel in the headquarters of the Philippine National Police are overweight, while almost one in 10 is obese, records at the organization’s Health Service showed.

According to PNP Health Service statistics,  3,283 officers and workers at the PNP national headquarters are overweight, while 588 are obese. There are 6,253 members of the PNP at Camp Crame out of a workforce of about 140,000 nationwide.

On the other hand, 2,376 PNP workers at the camp have healthy weights, while there are only six below their ideal weight, according to figures provided by Senior Superintendent Ma. Angela Manas Vidal, director of the Health Service.

An overweight adult has a body mass index (BMI) — a measure of body fat calculated based on one’s weight and height—of between 25 and 29.9 while an obese adult has a BMI of 30 and above.

In a May 23 memorandum to PNP personnel, Vidal stressed the importance of proper diet and exercise among members of the police force.

“One person every 20 seconds suffer heart attack and over 1.5 million people per year undergo heart surgery,” she said, citing obesity as among the factors that put people at a higher risk of developing heart diseases.

Vidal said it was especially important for policemen and women to be physically fit considering the nature of their jobs.

“The work of a policeman is more physical (than most other jobs). Those on patrol beats need to walk all the time, so they can’t afford to be heavy. Those who are overweight can’t chase criminals if they’re too heavy or too weak,” she said.

She said many police officers were exposed to harsh conditions every day, making it all the more important for them to engage in physical activities to improve their health.

On Friday, the PNP Health Service launched a two-month weight loss program in cooperation with Herbalife International Philippines, which seeks to engage participants in a campaign to improve their health over just eight weeks.

The program mostly features lectures on such topics as calories and exercise, healthy breakfasts, metabolism, proteins and fats, and the participants are given leeway to lose fat their own way. The challenger with the biggest weight loss after eight weeks will win P20,000 in cash.

Some 52 PNP members signed up, five of them with ranks ranging from Inspector to Superintendent, 21 noncommissioned officers, and 26 non-uniformed workers. But only 15 are expected to actually finish the program, which began on May 30 and will run until July 18, Vidal said.

Vidal said participants’ weight will be monitored every Thursday and the contestant with the highest percentage of weight loss during the two-month period will win P20,000.

“Today’s lifestyle and environmental conditions have made millions of us deficient in various nutrients needed for best health resulting to risk factors such as high cholesterol, high blood pressure, diabetes, and obesity,” Vidal said.

She said there were everyday activities at Camp Crame that could help a police officer trim the inches off.

“Every Tuesday and Thursday, we have aerobics and athletics days. So during this time either you join aerobics or play basketball or your favorite sports, such as badminton just so our police get some exercise,” she said.

“Or you can just walk around the oval or the grandstand,” Vidal said. With a report from Jamie Marie Elona, INQUIRER.net