‘This is for Angela!’–or how Lifehouse had a surprise for a fan–me | Inquirer Lifestyle ❮ ❯ 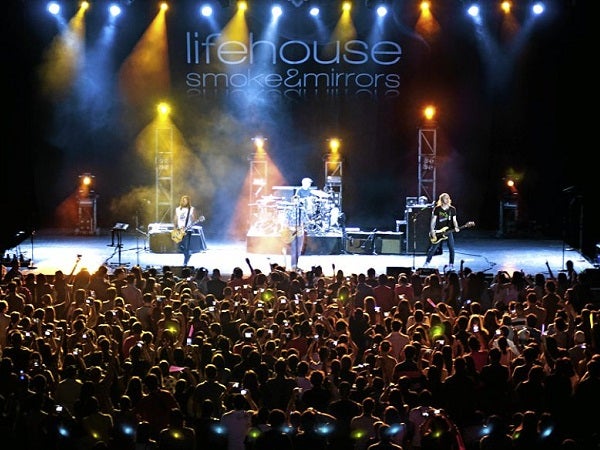 ‘This is for Angela!’–or how Lifehouse had a surprise for a fan–me

In every music artist’s repertoire, there’s always that one song that resonates so deeply with you that it changes your life completely. For me, out of the many soul-stirring tracks from American alt-rock band Lifehouse’s catalogue, it has always been “Broken” from its fourth album “Who We Are.”

Together with Coldplay’s “Fix You” and Gary Valenciano’s “Take Me Out of the Dark,” that song saw me through my toughest year in medical school. Despite being incredibly sad, “Broken” was actually about clinging on to hope even in the darkest depths of despair.

It assured me that I wasn’t alone in my daily struggles—that no matter how bleak things got, I still had something or someone to hold on to, be it my fragile faith in a spiritual savior or another human being.

So, during the band’s first visit in 2008, I thanked them for that and hoped they’d play it during the concert, which they did.

Four years and a hard-earned medical degree later, I found myself back at the Smart Araneta Coliseum for the same song, but for a slightly different reason. During our phone interview two weeks ago, and again at the round-table interview at Marriott Hotel Manila two days before the concert, front man Jason Wade had told me he had a “surprise” waiting for me at the show.

Being the nice, thoughtful guy that he is, he seemed to have remembered how special “Broken” was to me, even though he didn’t exactly know why at the time. My deadpan writer’s instincts told me not to get my hopes up too much, but I couldn’t help hanging on to that promise.

Even though I had an idea what the surprise was, nothing could’ve prepared me for what actually happened that night.

After a four-song opening set by young local band Never The Strangers, Lifehouse burst onto the stage with a cheery hello amid welcome-back cheers.

The band performed songs off its most recent album, 2010’s “Smoke & Mirrors”—jaunty, feel-good ditties like “All In,” “Wrecking Ball” and “Falling In” were largely unfamiliar to Filipino ears but still enjoyable.

It was during the wedding march classic “You and Me,” however, that the crowd began to display just what made the band fall in love with Manila in the first place. From “Take Me Away” to “Whatever It Takes,” smitten couples swayed and lusty voices joined the front man’s husky, heartrending vocals, while guitarist Ben Carey’s and bassist Bryce Soderberg’s sweetly serenading melodies rose to a cathartic, guitar-driven crescendo, with Rick Woolstenhulme Jr.’s drumbeats thundering rhythmically like one’s own pounding heart.

By the end of the set, I was a nervous wreck. When Jason gave a shout-out to ABS-CBN reporter Ginger Conejero in the middle of his acoustic medley, I started to wonder if my instincts were right and that I was wrong to expect anything. I moved closer to the left side of the stage, where I snuck a peek at the setlist. “Broken” was supposed to be the last song, so I waited, hardly daring to breathe.

The familiar opening chords filled the air and, without preamble, Jason launched into the first verse of the song. My heart sank to the floor. My friend Mae, who had known about the “surprise,” looked as disappointed as I’d felt and put a consoling arm around me.

I swallowed my half-formed tears and tried to lose myself in the moment. This was the song I’d been waiting for, anyway. But then, a voice suddenly broke through my melancholy reverie. I wasn’t sure if I’d heard right, but when Mae gasped, I knew.

“This is for Angela,” Jason boomed over the mic, pointing to the crowd before singing the second verse. I did the only thing I could: I cried at a concert for the first time in my entire life.

There were simply no words for such an emotionally overwhelming moment. Along with happy tears, the song brought forth a flood of bittersweet memories. It reminded me of all the trials that I’d undergone and overcome as a doctor-in-training, the time and effort I’d put into all my current endeavors, and all the blessings that I’ve been showered with, especially that week.

To hear this song again live was enough for me. To have

Jason sing it FOR me was just unreal. To me, the song dedication felt like a warm, encouraging hug from the songwriter himself, telling me that no matter how bad life may be at times, it will always get better. But, really, how could it be any better than this?

The band came back onstage for the two-song encore, wrapping up the 17-track set with the hauntingly beautiful ballad “Everything.” By this time, everyone else’s eyes had gotten a little moist, too.

“How can I stand here with you and not be moved by you?” Jason sang tenderly to the tearful crowd. Good question—and the perfect way to end a most memorable night.

Truth be told, I still cry every time I replay the fancam videos on my laptop. I might not have gotten the chance to thank the band in person for that monumental gesture, but I would like to express my gratitude in the best way I know how.

Jason, Rick, Bryce, and Ben, I hope you’ve taken a good look around the Coliseum that night, because the faces staring back at you belong to the people whose lives you’ve touched, changed and saved through your songs.

I’d like to think that that song wasn’t just for me—it was for all the doctors in the audience, my seniors and peers who work tirelessly to save lives everyday; for the millions of Lifehouse fans in Manila and all over the world who, like me, have made their own connection with your music; and, heck, even for the dozens of similarly dumbstruck Angelas in the crowd that night.

I wasn’t alone in my moment of pure, unadulterated joy; it was you and me and 8,000 of your loyal fans, and it was flat-out phenomenal.

Thank you for always being a constant testament to the healing power of music. I didn’t think it was relevant to tell you at that time, but if it weren’t for “Broken,” I probably wouldn’t have made it through med school.

Your music has been my steadfast companion in my journey to saving lives, and through this song, you’ve saved mine. Thank you for reminding me exactly what I need to do, and where I really want to be.

Now, thanks to you, this “broken” soul is whole again.

“Lifehouse live in Manila 2012” is presented by DAYLY Entertainment and That’s Ntertainment Productions.