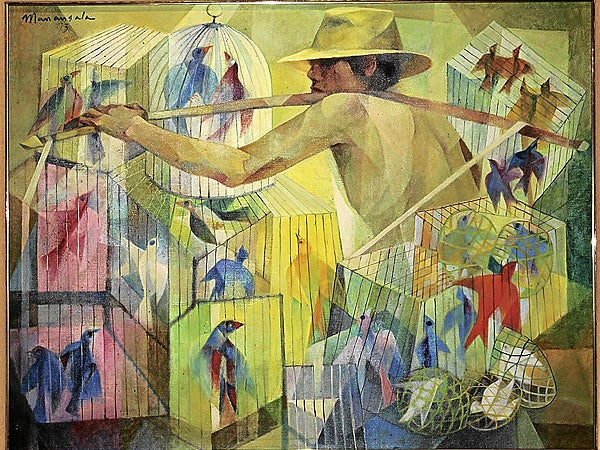 MANILA, Philippines—A familiar-looking painting called “The Bird Seller” was being offered by Christie’s-Hong Kong for its Asian 20th Century Art auction on May 27. Listed as Lot 2135, the 24 x 35 ¾-inch piece in oil on canvas was signed and dated “Manansala ’76.”

The Christie’s catalog attributed it to Filipino master modernist and National Artist Vicente Silva Manansala, and described it as “an iconic work, contributing significantly toward the visual development of cubism in Asia … it holds a place amongst some of the finest compositions of Manansala’s career.”

“At one glance it is very obvious,” he said. “Right away you see it’s not a spontaneous painting. The arm is very wrong. It is not the cubism Manansala is known for. But we don’t say ‘fake’—you know, lawyer’s advice—it’s just not a Manansala. Remember, you’re up against not the fakers and dealers here but the auction houses.”

The catalog further elaborated on how the piece reflected all the unique qualities and influences of Manansala’s art: “It depicts a local vendor of tropical birds crouched under the heavy burden of a pole across his shoulder. Around him sway myriad of geometric birdcages, creating layers of textural steppes across the pictorial surface. The birds within remind viewers of Manansala’s famous paintings of birds poised in flight, displaying identical body colors, flowing forms and rounded orbs for eyes, whose spherical shapes juxtapose with the gradient block structure of the overall composition.

“As the birds intersperse and overlap in the cages, their colors shift to produce varying faceted planes. Even within the skin tones of the bird seller, and in the hues of his hat, we observe Manansala’s judicious employment of subtly different shades to create transparent textures and colors despite the austere lines of his method. Throughout the entire work, the cubist elements succeed in being simultaneously rigorous yet dynamic.”

On May 11, Mr. H called the attention of Friends of Manansala, an organization of art lovers and collectors of the artist’s works, by contacting the daughter-in-law of member Cora Lopa.

Friends of Manansala was organized a year after the artist’s death in 1981 to “develop, promote and disseminate the ideals and artistic creations of Vicente S. Manansala and encourage public interest in and support of his works. It further aims to preserve and safeguard the artistic legacy he left behind, particularly his artworks, against fraudulence, forgery and fakery, and all forms of misrepresentation which will, in any way, tend to devalue such legacy.”

On May 13, during the family Sunday lunch at her house, Lopa compared the Christie’s catalog image stored in her daughter-in-law’s iPad with that of Manansala’s 1973 painting “Birdman” as reproduced in Rod Paras-Perez’s book “Manansala.” The two works’ date of execution, canvas size and location of artist’s signature varied, but especially noticeable were the styles and techniques involved.

Roxas was similarly surprised by the similarity of “Birdman” and the Christie’s painting.

“I don’t think artists would do the same thing the second time,” she said. “He may make a few paintings of the subject, but not the same line and color.”

As the master himself said at one time: “I repeat subject always but my inner self compels me to try different approaches to see if I can improve.”

Roxas said she acquired her piece in oil on canvas directly from the artist in 1973, the year it was painted. “We were close friends with Mang Enteng (Manansala’s folksy nickname). We would go to Baguio together. A group of us would hang around in his house in Binangonan, waiting for his latest works.”

Lopa consulted with Friends of Manansala president Maritess Pineda, who mulled over the idea of putting a formal complaint with Christie’s. Lopa was adamant, saying: “But, Maritess, can you imagine Mang Enteng doing a duplicate of his work?”

On seeing the catalog image, Pineda said Christie’s “must hold it back until further study.”

“They wouldn’t even identify whether the vendor is a he or a she,” Lopa said. They claimed, however, that they’ve been dealing with the source for some time now.

The dealer claimed this particular painting was bought directly from Manansala at The Philippine Women’s University in 1980, citing as witnesses National Artist Victorio Edades and artist-restorer Mariano Madarang, then dean of the PWU College of Fine Arts.

Mr. H is outraged by the vendor’s story. He said Manansala wouldn’t do that sort of peddling, knowing his status.

On seeing the online image of “The Bird Seller,” Richie Lerma, director and chief curator of Ateneo Art Gallery (AAG) and advisor for Salcedo Auction, first noted the composition.

“It’s done in an unusual way,” he says. “The arrangement of forms—it makes no sense. Look at the lower part of the painting. Why is there a birdcage? Why is it cut in the middle? Knowing Manansala as a visual visionary, he wouldn’t do that. For him, every element of the painting forms part of a larger aesthetic vision.

“In terms of color, there’s an attempt to capture the master’s. The question is of the transparency. The form is hard-edged, the shapes awkward. The lines are stiff.”

Lerma said a few such pieces passed off as original were once offered to Salcedo Auction. Having grown familiar with the stylistics from the Manansalas in the AAG collection, he detected the forgery and blocked the dubious pieces off the catalog.

The group was racing against time. Viewing of the artworks at Christie’s would start May 24, three days before the auction, and only about a week away.

During the Hong Kong international art fair on May 17-20, Pineda went there to see for herself the questionable artwork, and talk face-to-face with Yang. The Christie’s representative requested for an official letter of complaint from Friends of Manansala by May 23, a day before the start of viewing.

Pineda filed the letter as soon as she returned to Manila. It raised five serious questions about the artwork in question, touching on its stylistics and provenance. The question of stylistics eroded its authenticity; the question of provenance was the clincher that demolished its credibility.

On May 24, the first day of exhibition, Christie’s informed interested buyers that “The Bird Seller” had been withdrawn from sale. This was formally announced at the start of the auction, in saleroom notices and on the Internet.

The vendor reportedly “meekly withdrew the piece, with no violent protest.” Friends of Manansala is thanking Christie’s for being “quite cooperative.”

But is that all? Is there no penalty? Where’s the artwork now? Shouldn’t it be destroyed, as is the law in other countries? Couldn’t it circulate again in the auction circuit, when things have cooled down and everyone has put one’s guard down?

A paper at the University of the Philippines titled “Art Forgery in the Philippines: History, Practice and Aesthetics” says: “There are no clear laws on art forgery that prosecute people involved. Artworks are not considered public documents. Only public documents could fall under forgery. In Europe, once a work of art is discovered to be a fake, it is immediately destroyed. In the Philippines, it is left to circulate, and escalate in value. It is also very hard to prove a forgery. The only way to catch a forger is if you actually catch him painting the fake.”

Since Manansala’s death, a lot of nude paintings purportedly made by him have surfaced, Lopa said. She revealed that one of his former models was known for selling forgeries.

Mr. H said the dealer of “The Bird Seller” has been identified as a former Manansala model. Apparently, it could be the same person.

After the disturbing incident, the group’s next move is to put up a national registry for Manansala collectors.

“Because of what happened, it is now imperative that collectors must register their artworks,” Lopa said. “Mang Enteng’s just lucky. There’s no other group like us. There’s no Friends of Botong Francisco or Friends of Fernando Amorsolo.”

Manansala is only one of the select Filipino artists being forged. Perpetrators choose the most saleable, particularly the masters, as they command skyrocketing prices at auctions.

The UP paper traces it back to the art boom of the martial-law years, when First Lady Imelda Marcos was building the edifices that she decorated with art. “Saying she wanted to nourish the Filipino soul, she demanded to know the whereabouts of the major works of art, who owned them and where.”

And so started the rampant forgery and rabid production of the old masters as well as contemporary ones, even involving so-called curators and critics, galleries and museums, and the artists themselves. The First Lady might have meant well but the consequence was deleterious: a large-scale corruption of culture and the distortion of values.

That was only one small step away from real criminality. The UP paper recalls the case of a master forger employed by a businessman-artist, who squealed on the forgery operations. “A few days later, he was picked up in his house by three men in barong,” the paper says. “His body was later found in an open lot, tortured to death, with all his fingers cut off.”

To counter forgery, the UP paper urges a rigorous system of authentication of an artwork based on three basic principles: provenance, stylistics and chemistry. It is the last—the most important and the scientific part of the process—that we lack. We do it chiefly through optical inspection.

Lerma agreed: “Provenance is very important. Double-check the story of the dealer. Auction houses must have authenticators, experts. If they’re offering something for auction, their specialists must be very familiar with the artist, his life, his style and technique. If a question is hanging, it must not be offered for auction.”

Despite Friends of Manansala’s commitment to the perpetuation of the National Artist’s memory, a few “Manansalas” still find their way to the market.

Mr. H said that recently, two such dubious pieces, also claimed to have been acquired directly from the artist, had gone to an international auction. When the group was alerted, the pair had already been sold.

“Many know it’s a fake but they still buy it,” says Lopa. “I don’t know why. Maybe just to have a Manansala.”

The UP paper expounds on the question: “Can a forgery be beautiful? Can the fact that it is a forgery matter to you aesthetically? Will you change your judgment of a painting you praised after finding out it is a fake? Aesthetically, it makes no difference whether a work of art is authentic or a forgery. The fact of forgery is important historically, biographically, legally, financially, but not aesthetically … The question of beauty and aesthetics doesn’t even enter anymore; the question of ethics comes in.”

The paper traces the problem to a wrong orientation in our art history: “There has been too much emphasis on the object of art, which is a commodity. Art historians are only concerned with it … Art history is something broader. It is about people, the artist, theories, audience and the whole discipline of art.”

So it is when art becomes a commodity that it gives rise to forgery and its concomitant crimes.

And, as in any multibillion-peso business, the art world has its mafia and code of omertà. Silence is gold-plated.