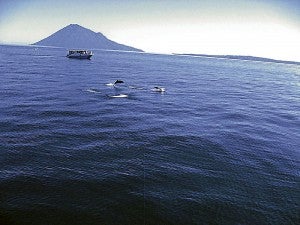 “I like your former president, she’s very pretty,” said Katherine Situmorang of the North Sulawesi Tourism Board (NSTB), referring to Gloria Macapagal- Arroyo. We were trading fun facts about our homes–her Manado and my Manila.

The Indonesian province is nearer the Philippine cities of General Santos and Cotabato than the country’s capital, Jakarta, which is about 2,000 km away (compared to about 500 km from General Santos).

It may have been just as well part of our country: Manado, like our islands, is blessed with warm waters and a rich marine life that make it ideal for divers. It also has fertile grounds that grow cloves and coconuts, among others, for export.

In the late ‘70s, the agriculture industry thrived and the residents could afford brand new cars, until a former president’s son monopolized the trade. Today, remnants of its rich past are evident–the roads are littered with Daihatsu Xenia, the Toyota Avanza’s twin model, and sections of the city are lined with mansions. There are no street children.

I brought this up with Evelyn Putri Soputra, president director of Suma Tour & Travel, whose family owns several businesses in Manado. “In Manado, everyone helps each other, whether they are a relative or neighbor. You can run to them for assistance; it’s normal.” According to her, even the crime rate is almost nil.

Amid this modernity, Manado and its surrounding towns have maintained an idyllic lifestyle. There are no high-rise buildings and discernible white-collar jobs. 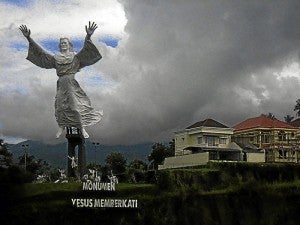 Time moves slowly and people are in no hurry: residents catch and grow their own food and tend to the flowers in their gardens.

For migrants in search of tranquil life, the move comes with a price: real estate in Manado can get more expensive than in Jakarta.

A “flying” Jesus and churches everywhere

One such pricey subdivision is the Citraland residential estate, in a hilly suburb of Manado, and which has become one of the places of interest in the city. Its Christian developer erected a 98-ft-high statue of Jesus called Christ Blessing. It is only a tad shorter than the Christ the Redeemer statue in Rio de Janeiro, and is thus the world’s tallest statue of Christ in the flying position.

They seem so committed to their faith that they have churches and places of worship every few meters in the town and its outskirts. I saw four different churches in one block, two on each side.

Cars, too, have crosses on their dashboards; one Xenia had a sticker that read, “Jesus inside.”

Instead of images of politicians, the city center displays billboards of evangelists and advertisements for their gatherings. Local diving and snorkeling instructors read the New Testament in their leisure time.

North Sulawesi is one of the few provinces in Indonesia with a predominant Christian population; the Muslims are the majority in the rest of the country. 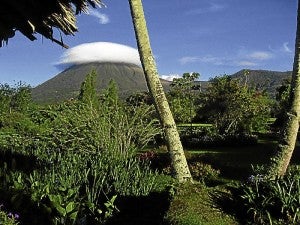 “Oh, we’d feel very guilty!” said Leonard Ratulangi as he bowed his head and stroke his chest in prostration while describing what it would mean for the pious like him to miss Sunday Mass. We were at the Gardenia Country Inn, which he owns with wife Bernadeth, a sprawling resort up the hills of Tomohon City, south of Manado. I had woken up at 5:30 a.m. as scheduled to hear a call to prayer by a local woman on a public address system outside.

“We’ve turned down the volume because we’ve had complaints from guests,” he explained. In fact, it wasn’t intrusive–it added to the rustic charm of Gardenia: its all-wood cottages with soft lighting and which have no phones and air-conditioning (the cool mountain weather ranges from 22 degrees Celsius in the morning to 18 degrees Celsius at night); its own organic farm and vegetable garden whose produce are served in its restaurant; and its open-air breakfast cottage which offers a view of the majestic Mt. Lokon.

Upon learning that I and another journalist on this trip are Filipinos, Leonard’s face lit up. “We are brothers! Not only as man and woman but also in our share of volcanoes,” he said.

For Leonard, who used to be a forensic pathologist, it was just one facet of our Malay connection. He expressed his admiration for Dr. Jose Rizal, Ninoy Aquino Jr., and Tanduay Rum, which has become part of a black market here for imported goods.

This strong link is also evident in our diplomatic relations: the Philippines is the only country which has a consulate in Manado.

With dolphins to boot

The Philippines and Manado have been trading partners since spice became a prized commodity in the world. Spanish missionaries came to Manado through our country, but it was the Dutch who left a lasting influence among the Minahasans, the collective term for the people in this region.
We set out on a boat provided by Tasik Ria Resort off the coast of Bunaken Island, a popular dive spot in Manado known for its reef wall, a mural of coral reefs inhabited by fish, turtles, echinoderms and sponges. Divers must have diving certificates; for the uninitiated, lessons or snorkeling are available. 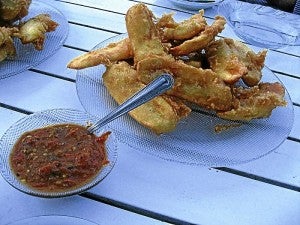 Shopping may have become the favorite pastime of locals who seem used to the natural beauty of the place. Vacationers and environment lovers can be spellbound–for instance, only 30 minutes into the sea, you can see a pod of dolphins frolicking in the water and putting on a show for tourists.

Aside from Bunaken Island, which can get very busy with its fully booked resorts and diving attractions, especially in July and August, Lembeh Strait on the east coast of North Sulawesi is not only an alternative but may soon be a first choice, since its waters are best for muck and critter diving, where you may encounter underwater friends such as the banggai cardinal fish, trumpet fish, angelfish and blue-ringed octopus.

Two hours from Lembeh Hills is the Tangkoko Batuangus Nature Reserve, where you can observe tarsiers in their natural habitat. (A “sleeping tree,” a term used by locals to refer to the tarsiers’ homes, is a 20-minute walk from the cars’ drop-off point.)

Our hike started at about 5 p.m., just in time to catch the nocturnal creatures creep out of their homes and begin their hunt. According to our guide, Noldi Kakauhe, another ideal schedule for the hike is 5 a.m., when tarsiers go back to their homes, and other animals–hornbills, monkeys, wild pigs and maleo birds–wake up to a new morning and produce sounds you’ll never hear in the city.

It was peculiar to be in a place I’ve never heard of and suddenly find it comfortingly familiar. Having spent three days getting to know Manado and the rest of North Sulawesi and feeling the affection our Minahasan brothers and sisters have for our country, it’s time we Filipinos returned the favor. 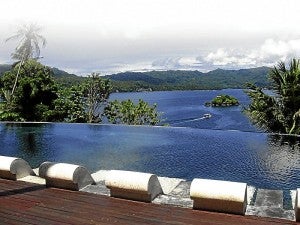 SilkAir, a full service premium airline, flies four times a week to Manado from Singapore. As part of the Singapore Airlines group, it flies to regional destinations and offers the same suite of services that may be expected from SIA, including the accrual of KrisFlyer miles. In the Philippines, it services the Cebu-Singapore and Davao-Singapore routes.

Gardenia Country Inn (www.gardeniacountryinn.com) is a mountain resort with cool temperature and a grand view of Mt. Lokon.
Lembeh Hills (www.lembehhills.com) offers a stunning view of the island and sea, and is perfect for diving and jungle enthusiasts.

Novotel Manado Golf Resort – Convention Center (www.novotelmanado.com) is a 10-minute ride from the airport and suited for business travelers and those who seek the Manado nightlife.