Tsunami dock: Should it stay or should it go? | Inquirer Lifestyle ❮ ❯ 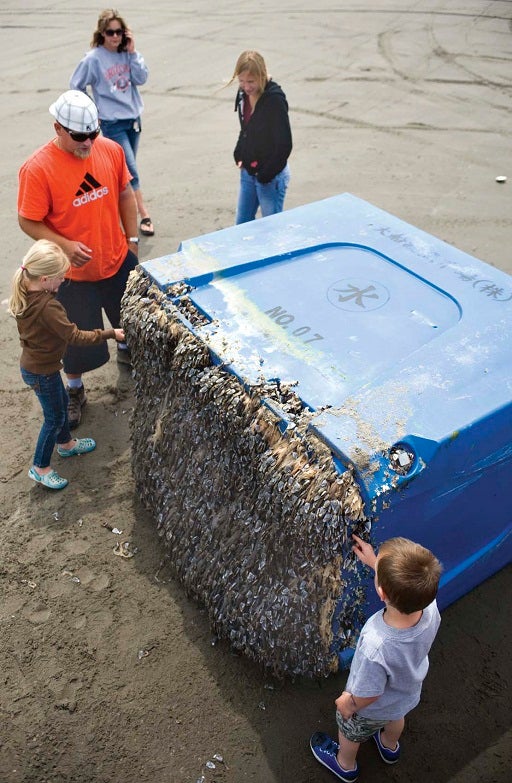 FROM JAPAN TO ARIZONA. Bobby Custard, of Phoenix, Ariz., in orange, watches as his children Jillian, left, 6, and Tyler, 4, investigate the aquatic life growing on the base of the fishing bin that washed up on Sunset Beach in Warrenton, Ore. on Monday, June 11, 2012. Custard was also joined on the beach by his girlfriend Sarah Neverdal, top right, of Butte, Mont., and his mother Betsy Custard, of Prescott, Ariz. The bin, with Japanese writing on it, is believed to be among the debris washing up following the March 2011 tsunami. (AP Photo/The Daily Astorian, Alex Pajunas)

Tsunami dock: Should it stay or should it go?

Thousands of people are flocking to see a Japanese dock that was torn loose by last year’s tsunami and ended up on an Oregon beach. But it won’t stay a tourist attraction for long.

Some local residents and callers to the Oregon Department of Parks and Recreation are suggesting that state officials leave the 165-ton, 66-foot (20.12-meter)-long dock as a memorial.

Chris Havel, a state parks spokesman, said the state is obligated to protect the integrity of the beach, which means keeping it clean.

“It’s not an automatic decision that everything must go,” he said from Salem, Oregon. “We do sit back and say, ‘Is there any reason to change the way Oregon manages the beach with this object?’ The answer here, as it has been in the past, is to protect the beach. That is more important than anything more temporary.”

Other residents say the dock, made of reinforced concrete and plastic foam, is an eyesore on Agate Beach, a popular recreational area north of Newport.

“It’s cluttering up my beach,” said Judy Wright, a front desk clerk at the nearby Sylvia Beach Hotel.

The dock has become a draw, with tens of thousands of visitors since it washed up early last week. The parks department has counted 12,791 cars in the parking lot since the dock washed up June 5. The same week in 2011 saw just 2,077 cars.

“I think they should just pull it farther up on the beach and make a memorial out of it, myself,” said Judy Kuhl, general manager of the Best Western Plus Agate Beach Inn, where guests staying on some top floors can see the barge from balconies. “It would bring people here. It’s also something for us to remember. It’s part of history.”

At least one newspaper also backed leaving the dock on the beach, using as an example the stern of a huge freighter that was left on another Oregon beach for nearly a decade. An editorial in The World newspaper in Coos Bay said the state shouldn’t hurry to remove it and might consider leaving it permanently.

“It could become a magnet for Japanese tourists,” the newspaper wrote.

The state has similar attractions elsewhere, such as the wreckage of the ship Peter Iredale at Fort Stevens State Park near Astoria. Havel said had officials in 1906 been able to remove the iron skeleton, they would have done so.

The issue of how the state could remove the dock remains a mystery — for now. On Wednesday, the department opened bids on proposals to either dismantle the dock and haul it to a landfill, or tow it off the beach and take it to a port where it could be put back to use.

Preliminary cost estimates appeared to favor dismantling the dock. Havel said the state could give some pieces to artists to create a memorial elsewhere. A decision would be made in days.

Havel said the state was preparing for more beach trash as debris from the 2011 tsunami continues to show up on northern Oregon beaches. The bulk of that debris was expected to arrive in the winter.

As for the dock, retired oil tanker chief mate Dick Clarey said he hoped there wouldn’t be a repeat of an exploding whale that has become Oregon beach lore.

A 1970 video shows the Oregon Highway Division using dynamite to dispose of a rotting whale carcass, which then rained down on bystanders and crushed the roof of a car.