Review: 'We Play For the Gods' is a wry comedy | Lifestyle.INQ ❮ ❯ 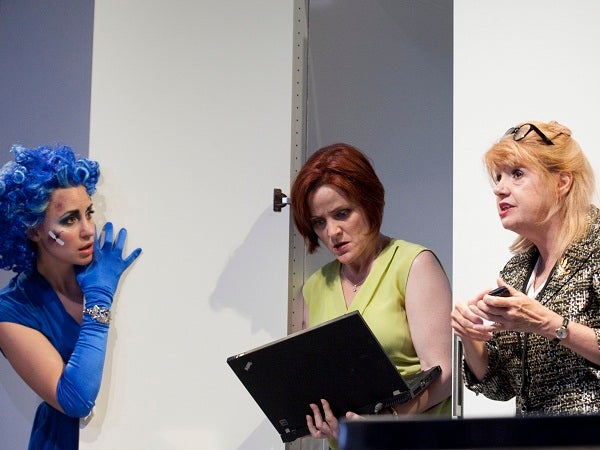 Review: ‘We Play For the Gods’ is a wry comedy

NEW YORK — In case you’re a creative type hoping to be visited by your muse, you’d better hope she’s not like Provocatrix, the mischievous character who uses her powers to cause chaos in the new workplace satire “We Play For The Gods.”

The Women’s Project Theater collaboratively created the wry comedy, now performing off-Broadway at the Cherry Lane Theatre. It’s full of laughs, and makes good points about being kinder to people and respectful of Mother Nature, but it’s also somewhat disjointed. No surprise, as the credits include four directors, seven playwrights and three producers.

The cast is solid, and the magical realism is fun, even if the plot is at times nebulous. A heartbroken workaholic scientist named Simi, (Amber Gray, sweetly sad), unknowingly conjures up a magical spirit, Provocatrix (Alexandra Henrikson, impressively other-worldly), while combining various types of human tears in a sterile gray research laboratory.

Annie Golden is delightful as longtime office manager Marla, snappish yet melancholy, whose life seems to lack joy. Marla’s patient phone conversations with her dementia-afflicted mother are genuinely sweet, but then things take a possibly tragic turn, which is confusing amid the general air of comedy.

Erika Rolfsrud is effectively brisk as the type-A-plus, loud and bossy managing director of the lab, Dr. Lisa Zauerblick. Her micro-managed world is suddenly falling apart, not only because of the malicious muse’s tricks, but primarily due to funding cuts for projects like the current study of the contagious nature of human weeping.

Becoming ever more of a real Blue Meany, Trix evacuates the building and even impersonates Simi’s boyfriend, in an apparent effort to redirect her love life that kind of peters out. The goddess eventually tells Simi that humans might have been created from tears of a female god, which may explain Trix’s increasing wrath at the lab’s mission to, in Lisa’s words, “translate those tears into dollars.”

Several plot threads are left hanging, although Henrikson impressively delivers a furious, harsh diatribe that, while lacking in coherence, is spoken with complete conviction. Lucio remains completely credible, and captures the charming aspects of her character without becoming ridiculous, which could have happened in less capable hands.

A program note says that all our lives can be “the stuff of myths.” While one hopes that can be true, it would be helpful if our myths were invaded by a gentler, more supportive goddess who tied up loose ends.