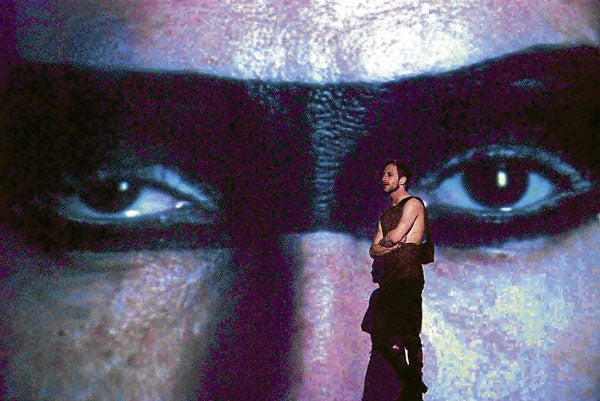 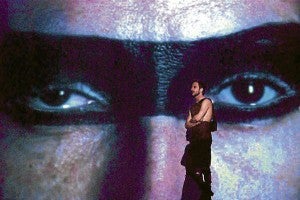 The prospect of watching a play in a foreign language can be daunting. You never know if you’ll be bored to death or be rewarded with an experience that fires up the cells in your brain and nerves in your body.

Three discoveries convinced us to catch their show: “La Fura dels Baus” means “vermin from the sewers” in Catalan (the dominant language in Barcelona alongside Castilian Spanish); their staging would include a meal being cooked as the play progressed; and excerpts of the production on Youtube (the images in their trailers, exciting as they are, do not do justice to the real thing, as we would soon find out).

“Degustacion de Titus Andronicus” not only fires up the brain cells, it quickens the heart, attacks the nose and tongue, rattles the nerves, and packs a wallop to the guts in a truly multi-sensory production.

Knowing no Spanish, we prepared by reading the synopsis on Wikipedia, though the production has omitted many support characters and has distilled the plotlines-the staging focusing more on execution and its exploration of food/taste/aroma. And even if the only Spanish word we understood that night was “Vamonos,” exclaimed by one character when she urged another to move, English wasn’t needed in the highly physical staging.

Video projections of smiling babies cross-projected against four white screens enclosing the performance area greets the audience as they file into the theater. No seats; everyone stands for the duration of the show. Meanwhile, the stench of charred meat permeates the space, courtesy of a chef standing on a platform high-above everyone’s heads, deliberately burning pieces of flesh. 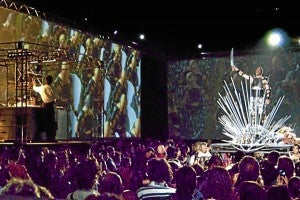 (If you are reading this during breakfast, it might be best to continue after you’ve finished your meal.)

If audiences come to the show without knowing that Titus is Shakespeare’s bloodiest, goriest tragedy, the visuals of babies and the smell of burning meat should serve as an ominous clue. The tale of ancient Roman general Titus Andronicus, his capture of Tamora, Queen of the Goths, and their ensuing episodes of revenge against each other is rendered in a wild, grotesque, visceral manner.

The production uses mobile scaffoldings and motor-driven vehicles that traverse the entire space. The smell of gasoline adds yet another olfactory layer, while audience members scramble to get out of the way of all these moving set pieces. A vehicle would have run us over were it not for another audience member who pulled us out of the way.

A hunt in the forest is transmuted into an interactive video game where actors aim at images on the screens. People are hung upside down on cattle hooks for disembowelment, blood streams down their torsos as they writhe, finally falling limp, eyes wide open. Audiences get splattered with bodily fluids.

Prior to the show, La Fura artistic director and the show’s director, Pep Gatell briefly spoke to the Inquirer. “Theater works with visuals and sounds. We have done work using smells. And now we wanted to work the sense of taste,” he said. La Fura is known to break the fourth wall in its productions. 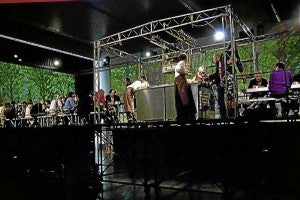 Effusive and expressive, Gatell said that he spent time plotting what aroma or “flavor” he wanted audiences to encounter for every scene. Food is distributed to the audience throughout the production and some are even invited to partake of the final cannibal banquet.

Contradictions are deliberate, such as cotton-candy being made during the rape and torture of a character, the sweet smell melding with visuals of on-stage blood and dismembered limbs. “The aroma affects your sympathetic nervous system and makes you salivate. But what you see makes your stomach tighten up,” he said. People have fainted at past shows.

Connections
He was amazed to find out that Filipino theater groups still perform zarswelas (“Here in Spain, it is a dying form,” he shook his head longingly.) and was excited to know that our theater groups also translate and adapt Shakespeare. (Dulaang UP will stage a Filipino translation of Titus later this year.)

The enterprise of theater is alike the world over, we both concluded, as Gatell expressed the difficulties of being an independent theater group with no institutional funding and as I shared the similar challenges faced by groups in Manila. “Money is always difficult,” he said.

Asked if his group could possibly tour Manila in the future or collaborate with a Filipino theater group, “If someone would invite us and sponsor us, of course!”

Explore
The theater scene is vibrant in Barcelona. The events-listings magazine Time Out even has a special publication for the theater line-up and tourist kiosks have maps that plot out all the major theaters of the city.

Those interested in experiencing the Spanish performing arts scene should take advantage of the ongoing El Grec Festival de Barcelona, which runs until July 31, 2011. This annual international theater, dance, music and circus festival is now on its 35th year and is named from its main venue: the open-air Greek amphitheater-style Teatre Grec.

It showcases works by Catalan artists and groups as well as international participants. This year, there are several “world classics” that might be a bit more familiar to Filipinos should they want to explore watching these productions in Spanish or Catalan: Todos Eran Mis Hijos (All My Sons), Julieta & Romeo (Romeo and Juliet), Un Tranvia Llamado Deseo (A Streetcar Named Desire), and Esperant Godot (Waiting for Godot).

If the idea of reading up on synopses prior to watching or dealing with a foreign language seems too much work, there are shows in forms where language isn’t necessary: music such as jazz and opera (Magic Flute) and dance, which even includes a bboy showdown.

The website of the city’s tourism office, Barcelona Turisme (www.barcelonaturisme.cat/en), has comprehensive information and many products (maps, guidebooks, tour packages, etc.) for visitors to the coastal city. After all, there’s lot to do in Barcelona in between watching show: it has shopping, restaurants, sports (football, of course), museums, churches, and beaches.