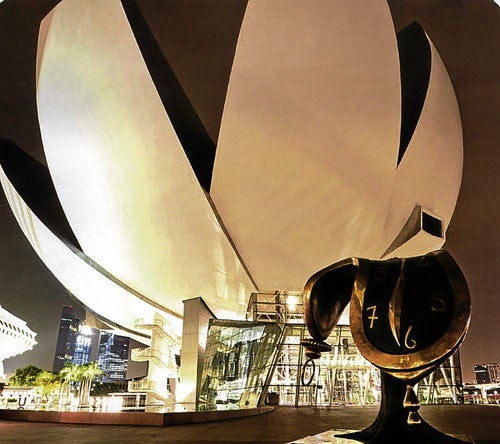 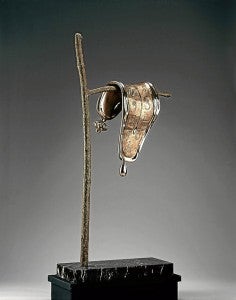 The closest thing Southeast Asia could get to Dali in all his mad genius is now showing in Singapore’s newest cultural showcase, the ArtScience Museum, at the Marina Bay Sands.

The latter has been heralded by Singapore tourism authorities as “the leading business, leisure and entertainment destination of Asia.”

It has convention and exhibition facilities; three hotel towers with over 2,500 rooms and suites, the towers connected on the rooftop by the surfboard-life SkyPark, which has several smashing bars and perhaps the world’s longest infinity pool; a huge shopping mall that’s touted by the city-state’s press handlers as “the best mall in Asia”; two theaters (one of them showing Disney’s Broadway hit “Lion King”); a huge casino; and an outdoor events plaza where a multimedia hydraulics-holograph show is staged every night.

But the centerpiece of the complex is the ArtScience Museum. Designed by the Israeli-North American architect Moshe Safdie, its shape has been either ascribed to the lotus flower or, to Sheldon Adelson of Las Vegas Sands Corp., to “The Welcoming Hand of Singapore.” But of course, it’s more of the former, as more than adumbrated by the 4,000 sq m lily-pond reflecting pool.

Nevertheless, the extensions that give the structure its unique look are described in the information brochure not as petals but as “fingers”: a total of “10 fingers” and two bay windows make up the building; the tallest finger stands 60 meters. Inside, the fingers form striking gallery spaces with natural lighting from the fingertips illuminating the interiors.

ArtScience Museum seeks to demonstrate how creative minds combine science and art to make objects that transform the world, according to Damien Sim, communication officer of the Sands. 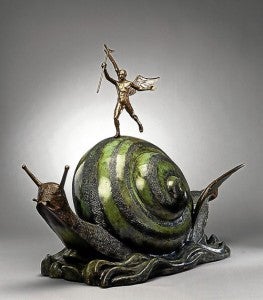 A permanent exhibition takes visitors on a journey of the creative process under three headings: “Curiosity,” “Inspiration” and “Expression.” On exhibit are instances of Asian and Western innovations in the arts and sciences across the centuries that chart man’s progress.

Set on the backdrop of the omnibus, omnivorous complex that combines business, pleasure, high-stake games of chance, and hybrid (or mutative) lifestyles, ArtScience Museum sticks out not exactly like a sore thumb (again, the hand metaphor), but as a respite, relief, and blessing (once again, the hand!).

If one feels a bit queasy and even guilty about the sybaritic ambience of the Sands with all that shopping, gaming and cashing in, then ArtScience may salve a bit the guilt: It provides refuge and sanctuary. It may, in fact, be the perfect getaway—a confessional box in the form of a ritual blessing (the hand, the hand!), or of a lotus flower, which remains pure and innocent amid all the grubby ugliness of sewers and creeks (that’s from the Oriental point of view), or, at the least, provides the potion for forgetfulness and escapism (like the Lotus Eaters of Homer’s “Odyssey”). Not that Salvador Dali (1904-1989) would have minded. The best-known Surrealist artist of all time was an all-around, omnivorous genius who explored a wide range of artistic expressions—from painting to film, print, sculpture, theater, furniture, industrial design and jewelry.

Known for his dreamy landscapes of arid and sandy Cadaques and Catalonia, Dali would have felt rightly at home in the Sands. And through the Dali collection of Benjamin Levi and the Stratton Foundation, museum-goers and art lovers can have a fill of the Surrealist icon through the show, predictably titled “Dali: Mind of a Genius.”

The section on “Femininity and Sensuality” features Dali artworks exploring the female form as embodiment of sensuality.

“Woman Aflame,” the bronze sculpture, combines two of Dali’s most lasting preoccupations: the female form depicted as a body of drawers, symbolizing the mysteries and treasures that a woman’s body hides. Set ablaze, the woman burns with passion, both a celebration of the female anatomy and a portent of its dangers and risks.

Etchings and lithographs follow the same preoccupation: A set of nude prints is titled “Secret Poem,” again a reference to the mystery of the female form.

“Religion and Mythology” provides a glimpse of Dali’s ambivalent relations with the Catholic Church as a result of having an atheist father and a devoutly Catholic mother. His distaste for Church and religion as a whole was reinforced by the liberal and modern regime that prevailed in Spain in the 1920s and 1930s, which led to the short-lived Republican government and the nationalist backlash, which resulted in the Civil War and the rise of Franco. But extremely attached to his mother, and perhaps because Catholicism is an intensely maternal religion owing to the Marian hyperdulia (which even the contemporary Spanish film director Pedro Almodovar, an agnostic, admits), Dali gravitated toward the Church and later on proclaimed himself a “Catholic [though] without faith.”

The most striking artistic explorations in this part of the exhibit is the series of prints on “Moses and Monotheism,” “The 12 Tribes of Israel,” and other Old Testament themes.

While the Church mediates in interpretation of biblical texts, taking care not to allow any personalistic, literal and subjective interpretations of the Bible by the faithful, Dali’s artistic explorations of biblical or, more specifically, Old Covenant themes rather than more obvious Catholic motifs—the Blessed Mother, the cult of saints, and the cult of the papacy—are very intriguing.

In the case of his perorations on Semitic monotheism, it appears his thoroughly bohemian and sensuous spirit was grappling with the Judeo-Christian God as a monolith and an absolute, a jealous God who would not have other gods before Him.

Perhaps it’s the old battle between the spirit and the flesh, the sacred and the profane. While Dali naturally succumbed to the latter, his struggles would reveal he had always hankered for the ideal and the supernatural.

Even if he had obviously failed in the enterprise, he seemed to have presented his works as reflective of the struggles he had made, as memorials not only of his corporeal but classic failures, but also of his attempts to be better. They are prayerful assays at transcendence.

The last part of the exhibit, “Dreams and Fantasy,” embodies Dali’s fascination with psychoanalysis, the foundational science of Surrealism, and his outrageous but striking explorations of dreams and the unconscious so as to make them yield the concrete reality of the diurnal. 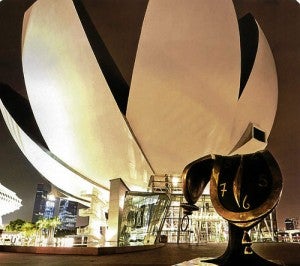 Here we see the sculptural renditions of Dali’s most famous painting, “The Persistence of Memory.”

But equally of interest is the print series and sculptural works on “Alice in Wonderland,” Lewis Carroll’s children’s story that was a literary precursor of the Surrealist movement.

Also on exhibit are Dali’s brilliant experiments with home décor and industrial design, such as his furniture and jewelry. In a brilliant curatorial stroke, the “fingers” of ArtScience Museum are used as a sliding showcase of the Dali furniture. The undulating set-up, the asymmetry and distortion, and the humdrum, almost suburban and boring, quality of the furniture combine to evoke the quality of a dream. Ordinary but eerie.

But the centerpiece of the exhibit is the huge 11 x 5-meter painting Dali did for the famous dream sequence of Alfred Hitchcock’s 1945 movie “Spellbound.” The mural shows a morbid congestion of dilated eyeballs in powerful colors, a brilliant if frightening depiction of the wide-awake world of dreams.

The painting intertextually melds with Dali’s earlier collaboration with Spanish filmmaker Luis Buñuel, especially “Un Chien Andalou” (1929) with its famous opening of a woman’s eye being slit open by a razor. Even that movie now seems the vanguard of today’s Conceptual video-art experiments. an indication that Dali was far, far ahead of his time.

In his incredible draughtsmanship that rivaled the Renaissance artists’ (he had stayed for a time in Italy where he imbibed the lessons of the Italian masters), his pictorial realism and trompe-l’oeil brilliance, Dali seems to have trained a photographer’s eye in order to capture the evanescence of dreams.

“Persistence of Memory” shows how the memory of a dream may wax, wane, wither and melt, but it remains valid as reality. Dali’s conceit is that no amount of distortion and forgetfulness can blur and fade dreams—that dreams are more real than real. Even in the dream of death, Dali remains real and present. Now we have to struggle with the persistence of Dali.

“Dali: Mind of a Genius” runs at the ArtScience Museum of the Marina Bay Sands in Singapore until Oct. 30.