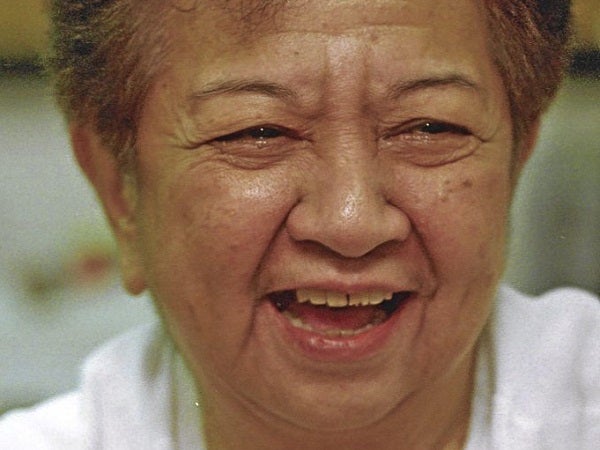 “Don’t throw your shawl on the sofa!” commanded a voice from the dark.

So back to stage left I went to do a reentrance.

But the voice continued. That voice could never be contained.

The voice was right. But it didn’t tell you how to do it.

That’s when creativity, from the embryonic stage, gets out of the uteral hole to proclaim itself as good enough to be born.

I entered the stage once again. Which meant I went out.

I sashayed to the sofa and swished my fur shawl, by one hand, onto my neck and caught it with my other hand, making sure the end I caught was further down than the other. Then, as I spoke my lines, I so very sophisticatedly pulled down my shawl, in synch with each word so that when I finished speaking, I pulled down my slinky prop and made a wave with it on the air before I put it on the sofa.

There was no voice from the dark.

You didn’t expect a voice from the dark named Zeneida Amador to say, “Good!” The most you got was, “OK.” And that was to the set men.

Because with tita Bibot, as we called her, a lot of what you got was screaming, insults (beautifully crafted in English), put-downs, slurs dripping with blood. And the occasional flying chair.

Which stabbed our hearts.

And made them bleed. And left indelible scars.

But Zeneida Amador was and is a master. A sculptor of theatrical ingenuity staged every weekend without a budget at the then Makati Insular Life Theater.

She studied at the New York Academy of Dramatic Arts (NYADA) and came back to Manila with a mission. (And c’mon, she wanted to be happy doing drama here, too!)

All she needed were people who would row down the muddy road of Philippine theater with her.

She put up Repertory Philippines. It was the first organized theater company in the Philippines that had shows Friday nights, matinees and evenings on Saturdays and Sundays.

Repertory Philippines staged only English straight plays and musicals. Straight plays are those which do not require singing and dancing. Musicals speak for themselves.

I was in the straight plays because my feet couldn’t coordinate with my mouth.

But Ms Amador never let you hide your acting skills behind your glorious dancing and singing magnificence.

That’s what she did with Audie Gemora, Menchu Lauchengco-Yulo, Enchang Agudo and yes, Lea Salonga.

We were sitting in the audience chairs at the Insular Life Auditorium, home of Rep a long time ago, watching kids audition for the title role of “Annie,” a musical Rep was going to stage. A little 8 year-old girl ascended the stage after a few others. Then she sang.

She sang. That’s all you could say of her. Lea Salonga. Lea sang.

After being 8 years old, she grew up and Cameron Mackintosh had her for his star in “Miss Saigon.” In London. The one with a real queen.

And guess what? The alternate was Monique Wilson, another Filipina from Rep.

And half the cast of “Miss Saigon” were Filipino, too, and most came from Rep.

When Cameron needed younger Filipinos 10 years later, he came over and Filipinos from Rep learned to end some of their sentences with “indeed”—because there they were, cast in London’s West End as “Miss Saigon” actors. Indeed!

Tita Bibot. A master and a “mister,” the life partner of Baby Barredo who was one heck of a singer and actress, too! She was the only one who didn’t get screamed and cursed at.

But the other Rep hearts could only take so much slicing.

And the stars of Repertory Philippines’ nights started changing galaxies.

They became supernovas in their own theater groups: Audie Gemora of Trumpets, Monique Wilson of New Voice Company, Robbie Guevara and Mio Infante of 9 Works Theatrical, Joel Trinidad of Upstart Productions, various artists of Atlantis Productions, and so many others. But Repertory Philippines remained a shooting star.

They all went under the tutelage of tita Bibot, but, in time, they also wanted to stop being at the receiving end of her arrows.

Theater should be enjoyed and not feared—by actors, as they worked their artistry through.

I went to work in advertising and worked my ass off and earned my own money to support myself. Theater did not pay. Simply said.

But all of us are still equipped with the acting skills, lessons, undying discipline of a true and dedicated theater actor. Up to the end.

Tita Bibot taught us all that and more. But those who wanted to stay in the acting business decided to stop the hurt and put up their own companies. Which is what an excellent teacher is, by way of King Arthur: You teach and teach and teach until the iron has gotten enough hits, and then you let go. Just like what Arthur did with Sir Lancelot—and his own wife.

Just think of teaching as what it is: selflessness.

Just think of teaching as “having a prop and using it; not just leaving it on a sofa.”

At tita Bibot’s deathbed, the stars came back and whispered in her ear. Words only what children of a stage father would, could and should say.