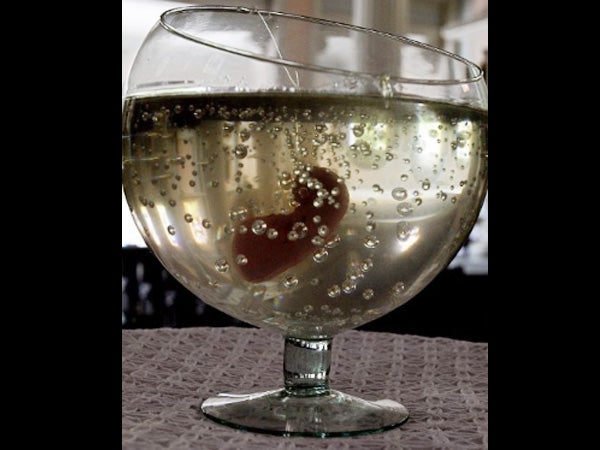 A figure representing a three-month-old fetus is pictured inside a glass with gel representing the placenta, at the altar of the Catholic church Santa Margarida in Rio de Janeiro's Lagoa neighborhood. AFP PHOTO/VANDERLEI ALMEIDA

Shanghai – After Wang Lan delivered, she brought home a baby girl and her placenta, which she plans to eat in a soup – adopting an age-old practice in Chinese traditional medicine.

The health-giving qualities of placenta are currently creating a buzz in Western countries, where some believe it can help ward off postnatal depression, improve breast milk supply and boost energy levels.

But placentophagy – the practice of eating one’s placenta after birth – is relatively common in China, where it is thought to have anti-ageing properties, and dates back more than 2,000 years.

“It is in the refrigerator now and I am waiting for my mother to come and cook it to eat. After cleaning, it can be stewed for soup, without that fishy smell,” Wang said, adding she believed it would help her recover from delivery.

Qin Shihuang, the first emperor of a unified China, is said to have designated placenta as having health properties some 2,200 years ago, and during China’s last dynasty, the dowager empress Cixi was said to have eaten it to stay young.

A classic medical text from the Ming Dynasty (1368-1644) said placenta – which lines the uterus and is key to the survival of the foetus – was “heavily nutritious” and “if taken for the longer term… longevity will be achieved”.

China’s state media says the practice of eating placenta has re-emerged over the past decade. One maternity hospital in the eastern city of Nanjing reported that about 10 percent of new parents took their placenta after childbirth.

Internet postings swap recipes on how to prepare placenta. One popular health website suggests soup, dumplings, meat balls or mixing it with other kinds of traditional Chinese medicine.

While trade in the organs has been banned since 2005, pills containing placentas ground into powder are legally available in Chinese pharmacies – indicating unwanted placenta is somehow making its way to drug companies.

“It is a tonic to fortify the ‘qi’ and enrich the blood,” a traditional medicine doctor at Shanghai’s Lei Yun Shang pharmacy said, referring to the “life force” that practitioners believe flows through the body.

“Sales are very good. Basically, every time we have supplies, they sell out very quickly,” a clerk at the shop told AFP.

And it’s not just mothers who want to eat the placenta.

One new father in Shanghai who did not want to be named said his relatives were eager to try the sought-after item. “My wife and I were still in the hospital… and they ate it,” he said.

But strong demand has created a thriving black market with hospitals, medical workers and even mothers selling placentas in violation of the law.

Last year, authorities investigated a hospital in the southern city of Guangzhou for selling placentas for 20 yuan ($2) apiece.

“They (nurses) take the money and use it to buy breakfast,” a source told a the local Xin Kuai newspaper.

They fetch a higher price in other parts of China like the eastern city of Jinan, where dealers ask as much as 300 yuan per placenta, most sourced from hospitals, the Jinan Times said last year.

Experts have said the pills may actually be made from human placenta, raising concerns that China’s trade in the organs has started to go international.

Some people, meanwhile, are averse to the idea of eating the organ.

“I know it’s good for health, but the idea of eating human flesh is just disgusting. I cannot do it,” said Shanghai accountant Grace Jiang, who opted to leave the placenta after giving birth to her son.