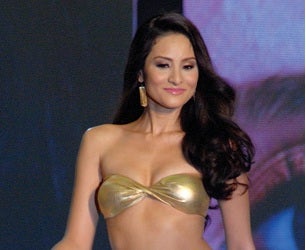 Call it a charm offensive. It might not resolve the conflicting claims over Scarborough Shoal between China and the Philippines, but the friendly overtures that the newly crowned Miss World Philippines plans to offer her Chinese hosts wouldn’t hurt either.

“I will try to be friends with (the Chinese) even though they (might not be) nice to me,” Queeneerich Rehman said after her proclamation as the country’s representative to the 2012 Miss World pageant to be held on August 18 in Ordos, Inner Mongolia.

“I will tell them it’s more fun in the Philippines because we have really nice, warm, hospitable people,” the Pakistani-Filipino beauty added.

Rehman, a former varsity basketball player of Assumption College, edged out 24 other aspirants to bag the P1-million cash prize and a brand new car from Hyundai during the pageant held Sunday night at the Manila Hotel.

Asked what best features of the country she can project to the world, Rehman replied: “Wherever you go here in the Philippines, it’s not the islands that make it special but the Filipinos who have warm hospitality (and) smiles on their faces, and give foreigners love, respect and hospitality. I believe the Philippines is a country we can truly be proud of.”

This year’s national competition invited netizens to suggest questions for the candidates via the microblogging site Twitter. Those whose questions were used in the final round of the pageant received free hotel accommodations from Agoda.com.

Like many of the other contenders to the Miss World Philippines pageant, Rehman is a veteran of beauty contests, having won Best in Swimsuit and landing in the top 12 in the 2011 Binibining Pilipinas competition.

Her swimsuit body Rehman attributed to “healthy eating and going to the gym.” She loves working out, she added.

She said she would use part of her prize money to throw a party for friends and family to celebrate her victory and the rest she would invest in a business venture.

Like the Qatari-born Venus Raj from Bato, Camarines Sur province, who won as fourth runner-up in the 2010 Miss Universe pageant, Rehman has a multicultural family background and has yet to meet her father.

She lives with her Filipino mother, Amalia, and Japanese stepfather, Katsuji Yukawa.

But it’s not her mixed parentage that won her the crown, Rehman said, citing instead her “passion, perseverance and determination to do (her) best.”

Rehman, who is set to compete with 120 other international beauties in the Miss World pageant in August, appealed for support from her fans.

“Please watch the Miss World and continue praying for me,” she said.