BOSTON, MASSACHUSETTS—Pacita Abad, the international artist from Batanes, was in Boston with husband Jack Garrity when we came visiting for the summer. But first, Pacita and my wife Noreen, schoolmates at the University of the Philippines, had a lot of catching up to do.

Pacita insisted that no less than a weekend would suffice. So when in Boston, we did what proper Bostonians do: a walking tour of Boston Common, a side trip to the museums, and, of course, an obligatory visit to the Kennedy Library, which was a delightful surprise for a bookworm like me.

By this time, Pacita had earned a name in the art world with themes influenced by wherever her economist-husband’s bank employer assigned him in Asia and Africa. And she was right; we had a lot of catching up to do. But wherever in the world Pacita might be, her thoughts always turned to her favorite topic: her home province of Batanes.

Rising from the rubble

As if typhoons and wind-tossed seas were not enough torment, a massive 7.1-magnitude earthquake struck the province of Batanes, north of Luzon near the southern Chinese border, on July 16, 2000.

Many of its centuries-old Ivatan stone houses fell in rubble heaps to the ground.

In a demonstration of how the human spirit can literally rise from the rubble, former Rep. Florencio “Butch” Abad, Pacita’s brother, took the opportunity to commission the University of the Philippines School of Architecture to rebuild the massive stone houses that were strong enough to withstand typhoons, but not earthquakes.

Thus began a labor of love by a group of enterprising architects who saw in the effort a chance to also study Ivatan architecture up close and personal. Many houses were rebuilt from the ground up, literally stone by stone.

Thus was born an experiment in local governance management that was presented recently as a case study at the University of Makati’s joint Green Urban Design Workshop with the UP Graduate School of Architecture for graduate students and local barangay officials.

The two-month workshop was conceived as a living example of how local government initiative can be harnessed to mobilize political will for urban renewal and conservation.

The workshop was a joint project of the U/Mak’s School of Public Policy and Governance, the Pimentel Institute of Local Governance, and UP. If fund-raising efforts were successful, the barangay officials and graduate students were to visit Singapore to look at urban development projects considered state of the art. The joint project was headed by architect Raymond Chin of UP and Raymund Rosuelo of U/Mak.

The Ivatan conservation project became a model for mobilizing indigenous resources in projects of this kind. The conservation team was headed by architects Joven Ignacio and included UP’s Cristina V. Turalba.

The Ivatan experience was chronicled in a book available at the UP School of Architecture. It details the architectural challenges of the project, but, more importantly, catalogued the local governance implications.

The work has been presented to five countries, which includes Taiwan, which has an Ivatan community that speaks a similar dialect. 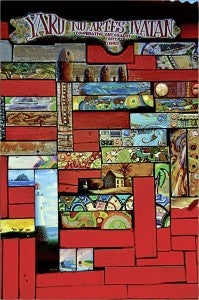 To withstand typhoons, the Ivatan stone houses sported six-ft-wide walls on the side facing the wind. Thatched roofing was built up to three-feet thick to resist rain.

Secretary Abad is now head of the Department of Budget and Management, but the people of his home province will remember him more for preserving a rare cultural heritage for posterity.

A renowned sibling, the late Pacita Abad, not only sought but celebrated indigenous cultures of Africa and Asia in her Matisse-like paintings. She will be well-pleased with this effort to preserve the Ivatan heritage she loved so dearly.

Fundacion Pacita, a vacation lodge that was formerly Pacita Abad’s home studio, was lovingly refurbished by Butch Abad in honor of her memory.

During the visit to the Kennedy Library, Pacita took us to where the Kennedys had made room for Ernest Hemingway’s memorabilia. The late President Kennedy was a Hemingway fan and loved to quote the writer’s definition of courage in his speeches: “Grace under pressure.”

Our whirlwind weekend was capped by a Sunday brunch at Boston Harbor for the mandatory clam chowder. You have not tasted clam chowder until you have tasted the original in Boston.

To make room for heaping servings of the chowder, we opted for a light salad and soft shell crab, which was in season. Our Bostonian friends said there is only a 48-hour window when these crabs molt (shed their shell to grow bigger) and the new one hardens. We were lucky to have a taste of this seasonal New England delicacy.

When crabs are hard to find, prawns capture the flavors of the sea just as well.  As with fresh green salad, we make a dressing of corn oil and the juice from a whole lemon to perk up the palate.

For side dishes, we sautée potato wedges that have been seasoned with salt, pepper and dried basil. We fry till golden brown in corn oil, which gives the potatoes more flavor. Sautéed carrots, whole corn kernels and beans add color, crunchiness and texture.

Whenever we have Boston clam chowder, our thoughts turn to Pacita.  We never forget that weekend in Boston, her immense talent and her enduring friendship. We will never forget Pacita’s Boston and Batanes.

The author is an itinerant gourmand and inveterate wine taster.