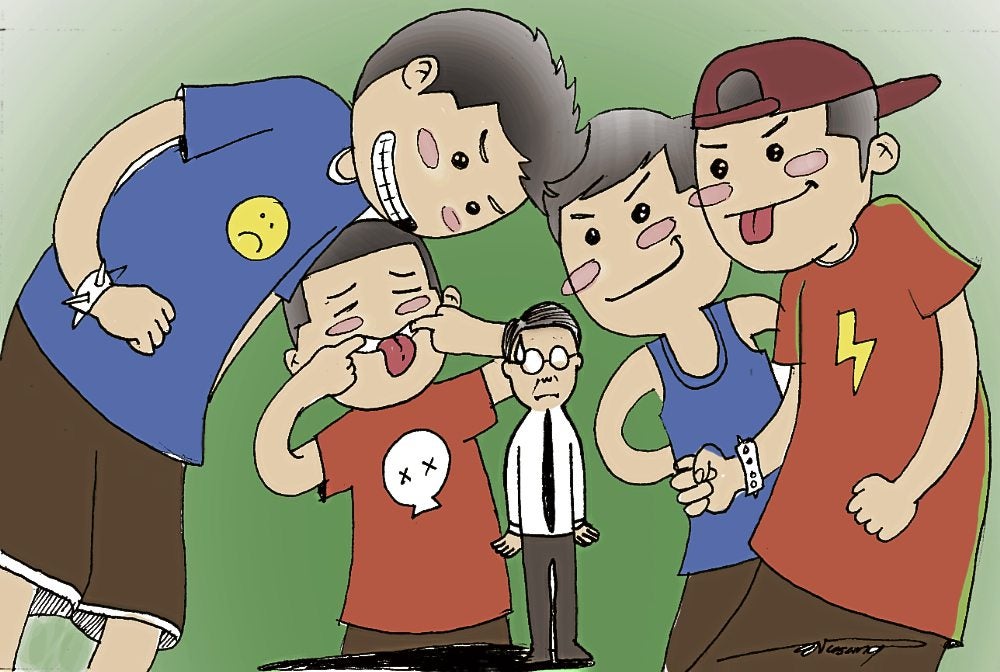 It was a video that got the attention of people all over the world.

The kids were cruel and relentless. “Oh my god, you’re so fat,” they said over and over again. “Put your glasses back on, I can’t stand looking at your face.” “You f***ing fat ass, look at all this flab right here.” “Do you have herpes?” “What’s your address so I can piss all over your door?” “If I stabbed you in the stomach, my knife would f***ing go through like butter, because it’s all f***ing lard.”

The victim, 68-year-old Karen Klein, has received an outpouring of love and support from people who were shocked and outraged by the bullying. They have sent her cards, flowers, teddy bears. The website Indiegogo.com, which originally hoped to raise $5,000 to give Karen a vacation, has received over $630,000 from close to 30,000 donors from all over the world. Karen has also been offered free trips to Hawaii and Disneyland, a cruise and a new car.

While Karen has been getting a lot of love, her tormentors—four boys ages 13 to 14—and their families have been the object of anger, hate mail and death threats.

“I’m sorry,” said Robert Helm, the father of one of Klein’s bullies, in an interview on the TV show “Inside Edition.” “This is not the way I raised my kids. I never would have in my wildest dreams think that they were capable of anything like this.”

The incident brought to light a rarely discussed aspect of bullying—children tormenting adults.

It’s a problem that isn’t often addressed—because adults are often embarrassed to admit that they have lost control and are being bullied by a child.

Adults often make excuses for bad behavior: They’re childish pranks, they’re just having fun, they’re just being cute, they’re kids being kids. But you have to draw the line between immature fun and bullying.

Karen Klein’s story isn’t as unique as we’d hope. Children are bullying not only other children—they can bully adults, too.

In an article on CNN.com, Hannah Weinberger wrote, “School workers say it’s a regular aspect of their daily lives.”

It happens in the Philippines, too.

“We thought we were just high schools kids having fun,” said Marie, a former student in an all-girls Catholic high school. “We’d play pranks on teachers, we’d play games while classes were going on, we’d completely ignore the teachers when they walked into class. But one day, we made our geometry teacher cry. That’s when I realized it wasn’t just fun. We were being cruel.”

Joey, a graduate of a co-ed high school, shared something similar. “We had a science teacher everyone made fun of. All the boys called her “horse” and mocked her because they said she looked like one. She knew about it, she suffered for two years but didn’t confront any of them.”

And this happens not only in schools.

Andrew, now 26, remembers being punished as a child for slapping his yaya. “When I was young, I wasn’t very nice to the household help. We had an elderly maid who avoided me because I liked scaring her. I used to electrocute her with this little clicker thing I had.” His parents think of those incidents as occasional acts of misbehavior but Andrew thinks he was a bully. “I’m not proud of it,” he said.

Kids bully their parents and grandparents, too.

Parentline Plus (now called Family Lives), a national helpline in the UK, reports that in 2008, 1,200 calls were made by parents reporting abuse by their children. Most of the perpetrators were 13 to 15 years old. In some instances, parents claimed to live in fear of their children.

Earlier this year, at a dinner party in Manila, seven-year-old Freddie walked up to his grandfather to ask for money. When his grandpa asked him to wait until dinner was over, he said, in front of all the guests, “What’s your problem? Just give me the money. I just want to buy a book.” His grandfather gave him the money.

When your child throws a tantrum in the mall to get you to buy whatever it is that he wants, he (or you) may not realize it, but it is a form of bullying. He is trying to coerce you into doing something you otherwise wouldn’t. CafeMom.com writes, “We’ve all seen it at restaurants, out shopping, at the playground, at school, even at home: Kids are bullying their parents, teachers and care givers.”

Encouraging a child to voice out his or her opinions, giving them leverage and letting them enjoy freedom is one thing. Allowing them to boss you around, manipulate you and abuse you is another.

CafeMom.com says, “Don’t settle for unruly children at home. It spills over.”

According to RaisingTroubledKids.com, parents who see signs of bullying must make a stand. “Declare bullying unacceptable. Pull rank and apply a consequence. You cannot let their harassment continue because they will use it on others.”