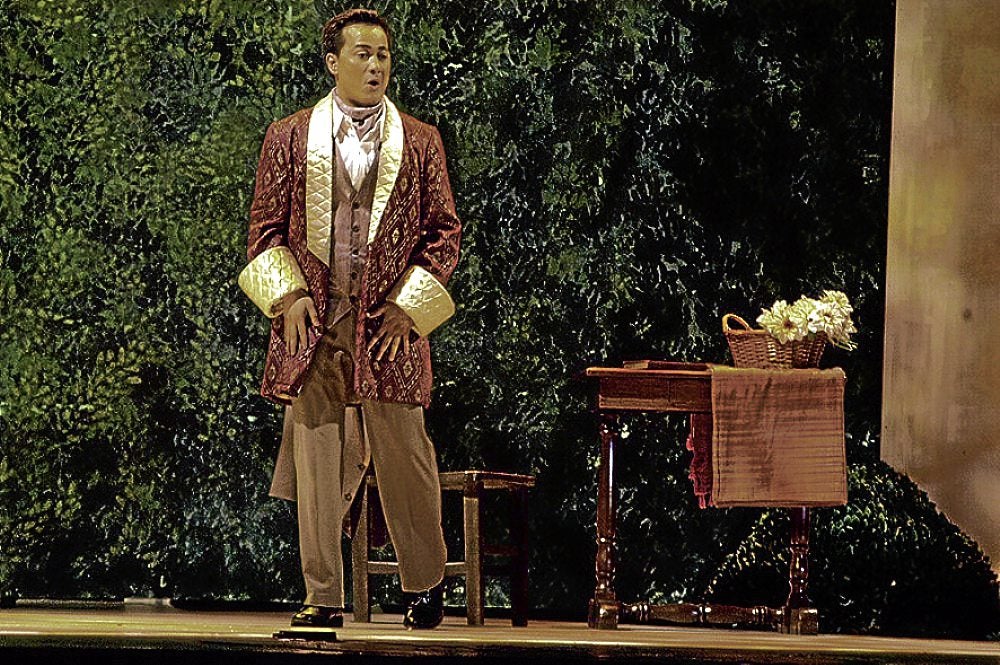 ESPIRITU as Alfredo in “Traviata”

The tenor who made his first immensely successful Verdi outing as Alfredo in “Traviata” last March is back.

This time Arthur Espiritu takes  time off from playing gripping dramatic roles by figuring in a comic part—as  Count Almaviva in Rossini’s “Barber of Seville,” due at the Cultural Center of the Philippines July 13-14.

In this Rossini opera, he is again  part of  a winning triumvirate that includes soprano Rachelle Gerodias and baritone Andrew Fernando, plus two Italian guest singers, Mario Cassi and Marco Fillipo Romano.

He has covered the role twice and performed it thrice, and always they are all memorable. For one, he enjoys the many guises he will wear in this opera.

“My most memorable one would have to be in Opera North, a summer opera program in New Hampshire,” said Espiritu. “It was the first time I felt comfortable with the role.  We had a great time as a cast because our director had let us sort of make our decisions dramatically and just helped us find our characters through suggestions and ideas to accentuate our own take on our character growth.”

Espiritu, the first Filipino tenor to make it at La Scala di Milan, admits the Rossini part has many things a singer has to learn fast and master, especially in the first act, before the crucial aria “Ecco Ridente in Cielo” (Here Smiles the Heavens).

The critical part is that the singer has to be able to sing both legato and florid fiorituri. “You open the opera with an aria with a small recitative section, then you sing the aria ‘Ecco Ridente in Cielo.’  Not only do you need to sing this aria with great feeling and sensitivity, but you also have to sing it with a well-honed legato in the first  section, then you sing coloratura on the second section, culminating in a high C.   Then you have to sing a duet with Figaro.”

All these—according to the tenor—involve a lot of energy and a good grip of one’s vocal instrument. “It will test your limits within the break of your voice.  And throughout the opera, you are involved in most of the scene. You will need to be able to play multiple characters convincingly.”

He noted an often-cut aria, “Cessa di Piu Resistere,” which he figured would be definitely included in the CCP production.

“This is my favorite aria in the opera,” he said. “After having played characters, sung ensembles, arias, you have to sing this killer of an aria involving all the varieties of vocal challenges.  This aria will test the tenor’s voice’s limits by putting it through gauntlets of coloraturas, a long legato section, phrasing, and it sits just within the tenor’s passagio. Then you have to sing it for about 10 minutes. No wonder it is often cut.”

Before this comic role, Espiritu debuted in a Verdi part as Alfredo in “Traviata” and was widely cheered. A new opera fan described Espiritu as “the John Lloyd Cruz of opera” by the way he absorbed the role of the love-struck lover.

Love to the point of paranoia was what Espiritu made of his dramatic Verdi role.

He said he still had to do the part on a limited basis.

“I really have to sing that role with conviction and passion.  It’s hard to inspire myself at times.  Now that I have  performed it in Manila, I feel better knowing that I managed to do it.

Preparing for this role required my patience in keeping it within my limitations by not pushing and trying to sing bigger than my voice.  I had to sing it with my voice.

“Director Floy Quintos (thanks to him) helped me find my character in Alfredo and I was able to grow dramatically.  And working with Rachelle and Andrew helped me maintain a good sense of comfort because we are friends and we are all relaxed.  It took me a while to get my voice in the role because I have such a light voice and I have to shape the colors well. Luckily, I managed.”

Espiritu said Verdi had thicker chord structures and supple lines with the orchestra. His voice lies naturally on a higher placement, the tenor added,  and Alfredo sits a bit more on the mid- to low range of the voice, and he has to make a good solid sound.

“Although Verdi made it a friendly role for me, Maestro Jae Joon Lee was very good at supporting me by matching the orchestra with my texture.  I’m very thankful for that,” Espiritu said.

With his international track record, what would he say is the key to a good performance?

First in his book is that the singer has to be extremely prepared.

“I really think that you have to spend time to rehearse a piece before you perform it in public,” he said. “Unless you have done the role before, then it is a different story.  Not just in that sense, but you have to really be able to say to yourself that you will be able to have no doubt when you are on stage.  You don’t really know what will come out of your voice. So you just pray that you are warmed up enough and ready to go.”

“Barber of Seville” is presented by the CCP in cooperation with the Philippine-Italian Association headed by Nedy Tantoco.