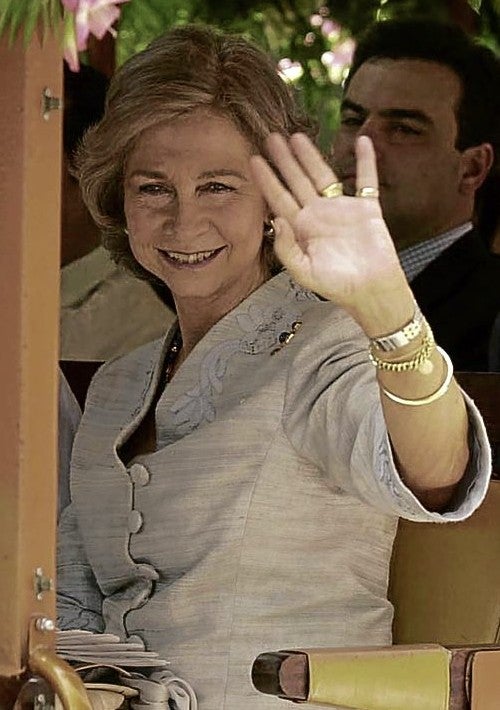 The Philippines is expected to reaffirm the ties that bind it to Madre España when Queen of Spain makes an official visit on July 2-6.

According to the Spanish embassy, the queen will have an audience with President Aquino in Malacañang Palace, where a state dinner will be held in her honor.

Her itinerary will include activities in Metro Manila, Albay province and Zamboanga City.  During her visit, Queen Sofia will observe the progress of the projects funded by the Spanish Agency for International Development Cooperation (Aecid) and assess the impact on the beneficiaries on the ground.

Included in her delegation are Secretary of State for International Cooperation and for Ibero-America and Vice Minister of Foreign Affairs Jesus Gracia, Ambassador Jorge Domecq and Assistant Secretary for Development Cooperation for Asia Alberto Virella.

Secretary Dinky Soliman of the Department of Social Welfare and Development (DSWD) will tour the queen.

In Manila, the queen will visit Escuela Taller in Intramuros and the National Library of the Philippines on July 3.

On July 6, she will be at the University of Santo Tomas (UST) and at the National Museum of the Philippines.

Escuela Taller is a vocational workshop school in cultural heritage recovery for vulnerable youth, funded by Aecid and managed by the National Commission for Culture and the Arts and Intramuros Administration.

Opened in 2009, it has benefited a large number of youngsters from the slums of Baseco and also Intramuros. Certificates in wood carving, masonry, painting, finishing and various other trades are recognized by the Technical Education and Skills Development Authority, improving the employability of economically disadvantaged youth.

During their training period and first professional practice, these young students apply their newly-acquired knowledge to the rehabilitation of prominent buildings and historical sites.

Some of the projects implemented include the restoration of perimeter walled areas in Intramuros, Parish Church of Malate, the rehabilitation of the DSWD office in the city of Manila and the Almacen Real in Fort Santiago, among others.

At the National Library, the queen will inaugurate an exhibition of photographs by two artists from Spain and the Philippines on the Aecid projects carried out in the Philippines.

At UST, the oldest university in Asia and declared a Royal University by Spain in the 18th century, Queen Sofia will visit the UST Museum and the historic University Library and Archives. She will also meet with the Dominican fathers and the Círculo Hispano-Tomasino.

At the National Museum, she will view the exhibit on indigenous textiles and crafts at the Queen Sofia Hall. She will be accompanied by Sen. Loren Legarda, the main sponsor behind this exhibition.

Her Majesty will also view a display of facsimile from biologist Juan de Cuellar that were donated to the permanent collection by the King of Spain on the occasion of his state visit to the Philippines in 1995.

Her Majesty will also discuss aid-related issues with Spanish nongovernment (NGO) representatives fully active in the Philippines and meet with relevant members of the Spanish community.

On July 4, in Albay province, the queen will visit the Camalig School and evacuation center, Josefina Belmonte Duran Memorial District Hospital in Ligao City and the Academy of Climate Change in Legazpi City. Gov. Joey Salceda will be her host.

She will take the opportunity to meet the local mayors of Albay with whom she will exchange views on the Spanish programs aimed at strengthening local governance through training, participatory planning and infrastructures.

Financed by Aecid, Camalig North Central School was renovated as an evacuation shelter for calamities for the benefit of 60,000 people.

Aecid is the main donor behind Albay government efforts on disaster preparedness, prevention and management, and has become a model in the field of disaster risk reduction.

The Josefina Duran Memorial District Hospital is also part of this endeavor as the centerpiece of the health emergency program in Albay, where Aecid has provided equipment for different health departments, a training center and ambulances which serve the whole province.

At the Academy of Climate Change, she will be briefed on the solid waste management program funded by Aecid and on the progress of the four UN Joint Programs which have been granted 18 million euros (P958 million) for climate change, nutrition, water and employment by the Spanish Fund for the Achievement of the Millennium Development Goals between 2008 and 2012.

On July 5, the queen will be in Zamboanga City and, accompanied by Mayor Celso Lobregat, will visit Fort Pilar Museum, several housing project sites, a center for street children, the Claret School, as well as Don Pablo Lorenzo Memorial High School and Zamboanga Medical Center.

She will also visit the center for street children, Akai Kalinga, and housing projects (Kalambuan, Katilingban and Kalinaw) set up in squatter areas with Aecid funds and implemented by Spanish NGO Manos Unidas and the local NGO Zabida.

She will also visit Don Pablo Lorenzo Memorial High School, a pilot school for the reintroduction of the teaching of the Spanish language in the Philippine secondary education and where a language laboratory was built by Aecid through the NGOs Humanismo y Democracia and Philippine Business for Social Progress.

Under the aegis of the memorandum of understanding for the improvement and promotion of Spanish language and culture teaching, signed in 2010, 66 public high schools in 17 Philippine administrative regions are offering Spanish as an elective subject in the present school year. At least 123 educators, who teach Spanish to over 5,000 students, have been trained at Instituto Cervantes in Manila since 2009.

Finally, she will visit a provincial hospital. Through the Development Aid Fund of the Ministry of Economy, Spain has provided the Zamboanga Medical Center with medical care equipment to improve patient services and treatment. Aecid is an active donor in the Philippine health sector. It contributes directly to the budget of the Department of Health for it to pursue its health reform agenda.

Spain considers the Philippines a priority country for its development aid. Both the Bicol region and Zamboanga provinces have been priority destinations of the Spanish development aid. Other regional recipients are Mindanao as a whole, the Caraga region in particular.

Spain has provided official development aid to the Philippines on a yearly average of 30 million euros from 2006-2010, a total of P6.389 billion, a large part of which consists of grants. Throughout this period, Aecid has implemented projects in a wide range of sectors—from local governance to disaster prevention, rural development, environment, education, health and social services—in partnership with Philippine government agencies.

At present, Aecid is committed to provide institutional support to the Commission on Human Rights, the Commission on Women, and the Office of the Presidential Adviser on the Peace Process’ Pamana, which links peace with development. These government agencies, together with the DSWD and the Department of the Interior and Local Government, are the main implementing partners of Spain’s development aid.

Spain and the Philippines are drafting a new framework agreement on development for the next four years that will focus on strategic sectors in order to ensure efficiency and impact of aid.

“With the visit of Her Majesty the Queen,” said Ambassador Domecq, “Spain wishes to further strengthen and enrich its long-standing relations with the Philippines.”