The American royal is a handyman: Or the Trumps’ get-rich formula | Inquirer Lifestyle 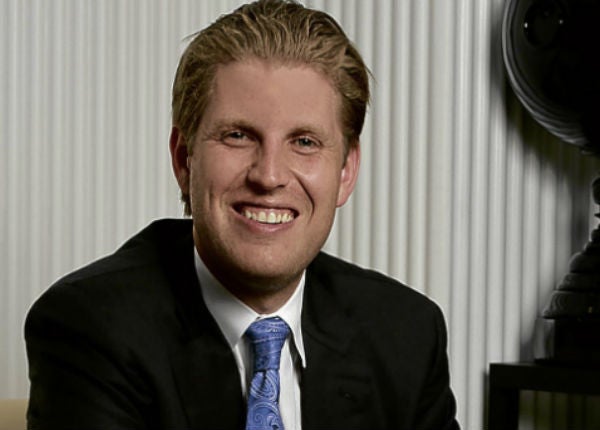 The American royal is a handyman: Or the Trumps’ get-rich formula

Towering at 6 feet 5 inches, Eric Trump, the youngest of the three children of real estate icon Donald Trump Sr. from the first marriage, has been dubbed an American royalty. But if you need a handyman to do home repair work, the scion will take off his bespoke coat, roll up his sleeves and pick up a sledgehammer.

Since he was a toddler, Eric has been going to construction sites. He became drawn to the process of building, from architecture to execution. “It started with hole in the ground and turned into a building that was 90 stories tall with apartments selling at tens of millions of dollars to the wealthiest people in the world,” he said. “We saw these buildings change the skyline.”

“My father put us to work very early,” he added. “At 10, I was cutting rebar with torches. I was digging ditches, pulling electrical wires, laying marble and stone. He immersed us in the business. He said if you  have to tell somebody to dig a hole, you need to know how long it takes to make one. With many people who work for me now, I’ve worked for many years doing exactly that.”

It took Eric years to earn the title of executive vice president of the Trump Organization. When he was a ’tween, his first job was to work on a property with several mansions where he was paid the minimum wage.

“I’d be cutting down trees,  mowing big fields with tractor,” he said. “I’d be on bulldozers, remodeling the houses, and laying tile and stone. Even my friends don’t believe me to this day until I do it for them.”

The older Trump wanted his children to have a firm grasp of the core of  business—construction.

“The best thing he did for us was to understand the value of the dollar,” said Eric. “There are kids who are in a similar situation from high-profile families. They are at nightclubs every night, dancing on tables; they don’t get it. They don’t have respect for money or for work. There’s very little self-discipline. That was what he’s trying to teach us.”

“If we wanted something, we had to work for it,” Eric recalled. “He gave us the best education. We lived in a beautiful house with him, but there was no free time for us.  No  lounging around. When there’s no school, we were working. It’s the best thing that ever happened to us as kids.”

His mother, socialite Ivana Trump, was a member of the  Czech Olympic ski team. His mother taught them manners. “We’d better open the door for somebody, say ‘thank  you’ and ‘please.’ She raised us with an iron fist,” said Eric. “On the one side,  we had the European influence—the travel to expose us to other lives and culture and the manners.” The other side was this father, who was larger than life, doing real estate.

Donald Jr., 34, Ivanka, 31, and Eric, 28, have joined the Trump Organization on their merits. “My father has been a believer in people and hard work,” Eric said. “If we weren’t good at what we did, we wouldn’t be in the company. He’d ask us to do something else.”

Initially, Trump watched over their shoulders until the children proved their expertise. “Now we’ve done a great job for him with so many projects in the US and overseas,” he said.

Eric added that through the years, the siblings have discovered each other’s core competence and developed their niche.

“We’re all involved,” he said. “Through  e-mail, everybody knows exactly what’s going on. I spend a lot of time with construction, building design, acquisitions, and building hotels. Ivanka does interior design and hotels. Don gravitates toward the commercial assets—offices and leasing.”

With his father’s guidance, Eric is responsible for expanding the Trump National Golf Club portfolio, which is the most prolific in the industry.

“The most rewarding thing in the company is to have a father to say, ‘Go out and do it. I trust you to make the right decision,’” he said.

In the Philippines, Eric collaborated with Robbie Antonio, project head of Trump Tower Manila, in the building design which included interior layouts and bathrooms.

“Ivanka picked up the marble, the finishes, did the collaterals and the marketing,” he said.

On sibling rivalry, Eric explained, “We’re all Type A people. We want to get the best jobs, but we poke fun at each other. We work in the collective interest of the company.  We have one goal in mind—to build the best buildings and the best properties in the world.”

Because of the siblings’ ability to keep their focus, Eric said the Trump International Hotel in Chicago has become the No. 1 hotel in America and the fourth best hotel in the world.

Trump Hotel Las Vegas is rated the best in the state. Trump Hotel New York is arguably the most luxurious.

With all the success, Eric said the biggest challenge in his career is keeping up with the brand. The reality show “The Apprentice” made the Trump family high wattage.

Many people worldwide have been offering to venture into partnerships with them.

But Eric said they’ve decided to be discerning with their choice on who to forge partnerships with. Among the select choices would be building Trump Tower Manila with Century Properties, which they want to become the most spectacular in the region.

Eric said the Antonios of Century Properties are like family to the Trumps. There are similarities between the two families, in fact.

José Antonio, chairman of Century Properties, has known Donald Sr. since the ’90s and has read his books.

“They (the Trumps) talk about passion and doing the best in what they do, which is also our mantra,” said Antonio. “We try to differentiate ourselves by building the best.”

“My four sons and Mr. Trump and his children have the same profile,” the Century Properties big boss added. “I spoiled my sons by giving them the best education. What I’ve done is what Donald did for his family—to create a platform where the family grows bigger and not just giving a check.”

In an earlier interview, Donald Trump Jr. explained the partnership between Trump Organization and Century Properties.

“What’s important is that we have a like-minded interest in the buildings we’re trying to develop in terms of luxury. . . Our partner is willing to go cutting-edge and do things that have not been seen in the market in the Philippines.”

Asked if any of the siblings are eyeing Donald Sr.’s position, Eric replied, “He is irreplaceable. His  funny motto is, ‘to retire is to expire.’ Business is his passion and hobby.”

Eric added: “What I love the most is to go to him and say, ‘Here’s the situation; here is what I think I’d do. How would you approach this?” He would answer, ‘Go in the complete opposite direction.’ It sounds crazy and he may be right. He’s got an incredible mind and I’d love to be able to take advantage of that.”

The scion said he is often asked about Donald Sr.’s philosophy on how to get rich. “The guys who work from 10 to 4 aren’t the billionaires,” Eric remarked. “My father works 24/7.  He doesn’t understand what the word vacation means.  You need ability. You need to understand development. You need to be tough. There’s an element of luck especially if you get started, understand costs, and take risks.  You need to put everything out on the line, work hard and make it happen. He did all those effectively.”