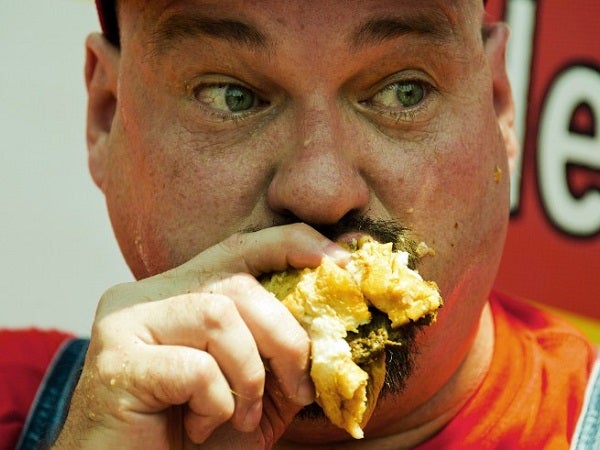 Dale "Mouth of the South" Boone chokes down another hamburger during Z-Burger's 4th Annual Independence Burger Eating Contest in Washington on July 3, 2012. Contestants had 10 minutes to eat as many hamburgers as they could, with "Furious Pete" Czerwinski winning his fourth championship in a row with 15 burgers. TOPSHOTS/AFP PHOTO/Jim Watson

Peter Czerwinski, 24, ate 15 hamburgers in the space of 10 minutes at the Z-Burger Independence Burger Eating Championship to win a $1,000 prize plus a similar amount of gift cards for the local burger chain.

“Right now, I feel full, but I’m excited I defended my title,” said Czerwinski, who holds Guinness records for eating a raw onion in 43.53 seconds and for swallowing the most Ferrero Rocher chocolates — nine — in a minute.

“Some people will find this very gross, but they’re still watching. They can’t turn away.”

Czerwinski, who claims to have won most of the competitive eating events that he has entered, was hospitalized for anorexia 10 years ago. Today, he lists bodybuilding among his passions.

In New York, world champion hot dog eaters prepared to flock to Coney Island on Wednesday, the Independence Day holiday in the United States, to determine who can wolf down the most wieners and buns in 10 minutes.

Some 40,000 people are expected to descend on Nathan’s Famous hot dog stand on the iconic Brooklyn beach for the competitive eating classic that is held every Fourth of July.

At a weigh-in Tuesday outside New York city hall, current male champion Joey Chestnut and his female counterpart Sonya Thomas expressed confidence that they will retain their respective titles.

Chestnut, 28, undefeated since 2007 when he ate a record 68 hot dogs, said he has been on “a three-day fast (with) no solid food” to prepare for the tournament that dates back to 1916.

Thomas is meanwhile aiming to surpass the 41 hot dogs she consumed at the first-ever women’s event last year. “I am going to turn 45, so I want to eat 45,” she said with a smile.

She welcomed the fact that women and men compete separately, because men “have bigger throats and we cannot swallow as fast.”

Mayor Michael Bloomberg, attending the weigh-in, punned: “Let me be frank: this is one of my favorite traditions… No question it’s going to be a dog fight.”