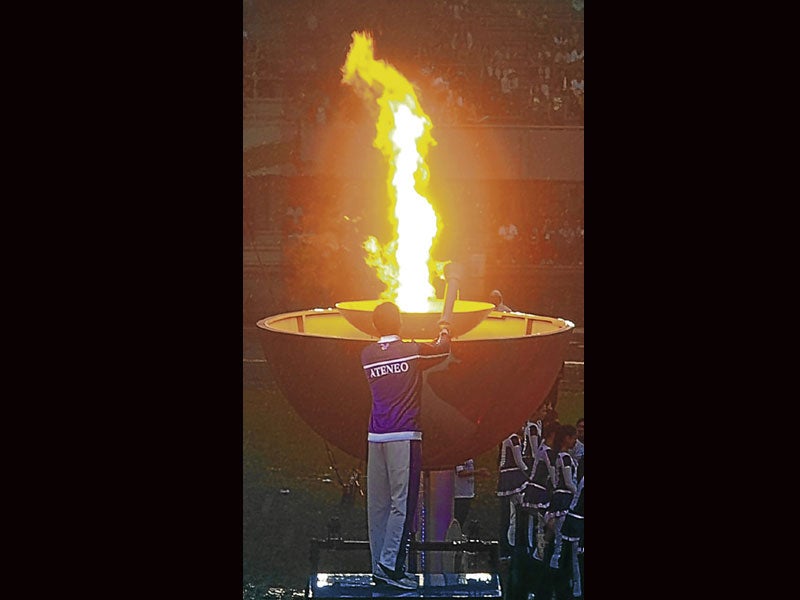 Cheering in the rain 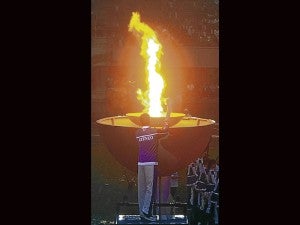 That describes the opening ceremony of the University Athletic Association of the Philippines Season 74.

The Olympic-style opening last Saturday was unprecedented in recent times.    This year’s host is the Ateneo de Manila University but all member schools took part by sending student-athlete representatives.

The opening apparently aimed to restore the spotlight to the athletes, the non-basketball players, rather than turn it a variety show for the hosting university. However, the venue and the timing leave a lot to be desired.

The rain did not relent in the afternoon, leaving the Marikina Sports Park muddy.  The stands where the estimated 3,700 athletes were seated were warm and stuffy.  Members of the symphony, who had to perform in the rain, lovingly wrapped their instruments in plastic. Photographers scrambled for their own protective wraps for their cameras. 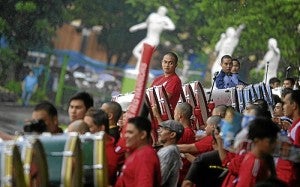 After the performance, members of the dance group returned to their tents and were bubbling with stories on how they nearly got a “mud facial.” They kept their spirits high by cheering each other on.

Umbrellas in school colors were provided the athletes as they paraded around the park’s oval.  The umbrellas provided a nice, colorful touch to the scene.

However, it was almost comical to watch tall, grown men carefully choosing their steps to avoid pools of water on the grass.

We hope none of them caught the flu after spending some time cooped up in the stands and then walking in the rain soon after.

“I thought that this opening is nice. It would have been better without the rain,” says Mark Austria, judo player of the University of the Philippines.