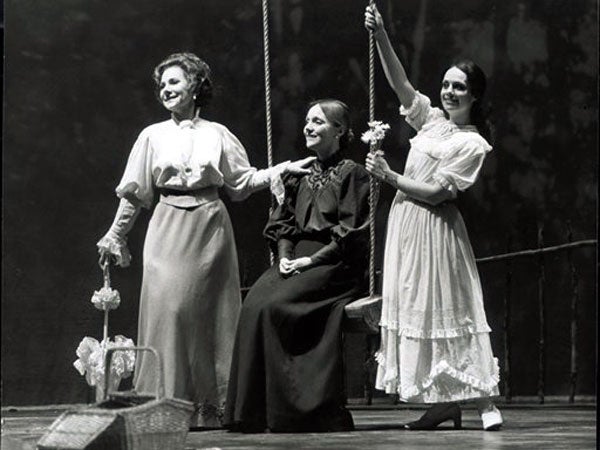 This Feb. 1978 black-and-white handout photo provided by the Kennedy Center shows, from left, Evelyn Lear as Irina Arkadina, Patricia Wells as Masha, and Evelyn Petros as Nina in Pastieri’s The Seagull. American soprano Evelyn Lear, who became an opera star in Europe while singing some of the most difficult contemporary operas before returning to the United States, has died. She was 86. (AP Photo/Kennedy Center)

Opera star soprano Evelyn Lear dies at 86 in US

WASHINGTON— American soprano Evelyn Lear, who became an opera star in Europe singing some of the most difficult contemporary roles before returning to the United States, has died. She was 86.

Lear died Sunday at a nursing home in Maryland, according to her longtime friend and collaborator John Edward Niles and her son Jan Stewart. Niles said Lear had been ailing for months after suffering a mild stroke.

Lear and her late husband Thomas Stewart, the acclaimed bass-baritone, retired near Washington after singing together for decades around the world. They wanted to be closer to their grandchildren and began working to foster new American voices in opera. Stewart died in 2006.

Overlooked by U.S. opera houses in the 1950s, Lear and Stewart set out for Europe after winning Fulbright fellowships to study in Germany. Lear won fame in Vienna by singing the title character in Alban Berg’s “Lulu” in the early 1960s. She learned the role in just three weeks.

“She considered herself to be a singing actress,” Niles told The Associated Press. “That’s what made her great.”

He said the couple’s struggle breaking through in American opera venues fueled their displeasure that American singers were being passed over for European singers.

So they set out later in life to nurture American singers performing the work of Richard Wagner, creating a program for young voices with the Wagner Society of Washington. Niles said Lear was a natural teacher.

Evelyn Shulman was born Jan. 8, 1926, in New York and studied piano in her teens. Her mother was an opera singer but had to give up that passion when she had children. Shulman married Walter Lear, a physician, when she was young, but they divorced.

She studied at Julliard, where she met Stewart. Lear found her true passion was singing, but U.S. opera houses at the time were more interested in attracting European artists.

“She had it all: Beautiful woman, very fine actress, wonderful with languages,” said Roger Pines, dramaturge of the Lyric Opera of Chicago. “The authenticity with which she sang German was astonishing.”

It was a perfect combination for the role of “Lulu,” which required certain charisma, he said

Lear had ambitions to find major opportunities in Europe.

“This ‘Lulu’ that she sang in Vienna put her on the map and made people understand that here was this phenomenal performer who had all of the musicality and all of the control that was needed for this super-humanly difficult role,” Pines said.

The role defined her as an artist and musician, said Christina Scheppelmann, artistic director of the Washington National Opera, in an interview from Vienna.

Later, Lear would transition to more standard repertoire. She suffered a vocal crisis in the late 1960s and early 1970s. She had to stop singing and learn to sing all over again, moving to music she found more vocally healthy.

She sang “Tosca,” Mozart’s “Le Nozze di Figaro” and “The Merry Widow,” among her many roles, performing in some of the world’s great opera houses.

She made her debut with New York’s Metropolitan Opera in 1967 as Lavinia in the world premiere of Marvin David Levy’s “Mourning Becomes Electra” and sang her finale there as the Marschallin in Strauss’ “Der Rosenkavalier” in 1985.

Her son said his parents found vindication after being rejected by U.S. operas early in life.

“They got nowhere in this country, and they became big stars in Europe,” Jan Stewart said. “Then all of a sudden the Metropolitan Opera asks them to come and perform. That pretty much sums it up.”

Lear continued performing and teaching later in life and was a renowned recital singer on her own and with her husband.

“They were extraordinary as a team,” Pines said. “I witnessed one of their recitals and it was utterly, utterly captivating.”

Lear’s final public appearance came in May, when she attended a concert at the Kennedy Center in Washington featuring young soloists from the Evelyn Lear and Thomas Stewart Emerging Singers Program of the Wagner Society. Lear was acknowledged from the stage.

“You couldn’t stop her,” Scheppelmann said. “She wanted to see the young singers.”