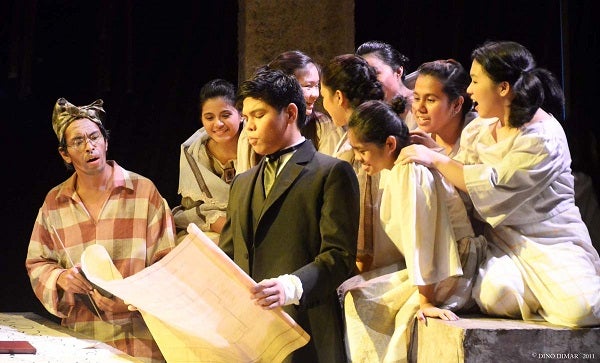 A scene from ‘Noli’ the opera. CONTRIBUTED PHOTO

MANILA, Philippines—Dulaang UP opens its 37th season with the restaging of “Noli Me Tangere: The Opera,” the critically-acclaimed operatic retelling by National Artist Felipe Padilla de Leon of Jose Rizal’s Noli Me Tangere with libretto by fellow National Artist Guillermo Tolentino. This restaging is also part of the celebration of the birth centennial of Padilla de Leon. Touted by critics as the musical treat of 2011, the production had a successful, sold-out four-week run in November last year.

“Noli Me Tangere: The Opera” is directed by DUP Artistic Director Alexander Cortez (Cayabyab/ Asensio’s “Spoliarium,” Lumbera/Letaba’s “Hibik at Himagsik” nina Victoria Lactao,  Quintos/De Guzman’s “Atang: A Play with Music,”  Quintos/ Africa’s “St. Louis Loves dem Filipinos: The Musical.” It is a testament to the ingenuity of the Filipino artist.  With two pianos providing the accompaniment to the performances of some of the country’s finest classically-trained singers, the production welds energy and fresh insight together with tradition to breathe life into Rizal’s timeless opus through the transcending power of music.

“Noli Me Tangere: The Opera” is made possible by the UP Office of the President, UP Diliman Office of the Chancellor, Office of the Dean College of Arts and Letters, UP Office for Initiatives in Culture and the Arts,  Day by Day Christian Ministries, Ms. Irene M. Araneta, Dr. Joven Cuanang and NCCA Chairman Jun de Leon.