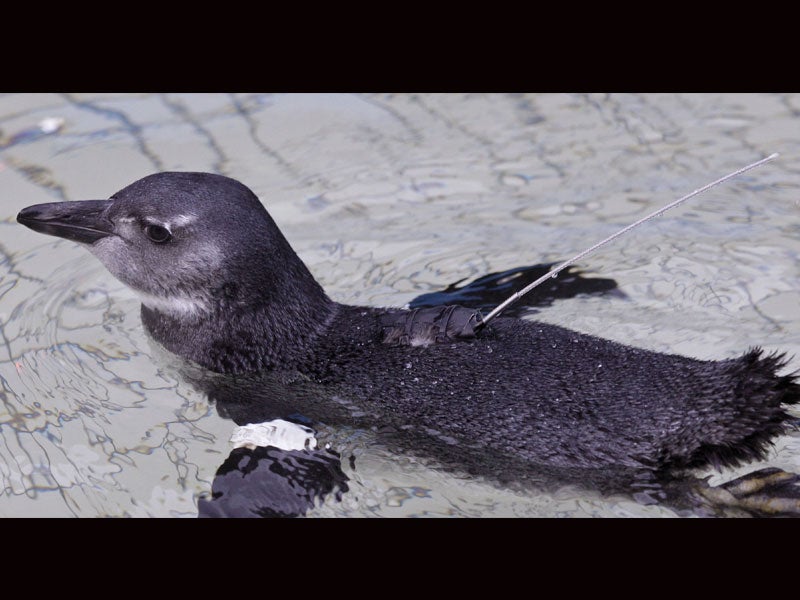 JOHANNESBURG—South African scientists are fitting young penguins raised by humans with satellite transmitters so they can track them once released into the wild, hoping to gather information that might one day lead to new breeding colonies of the endangered birds.

Researchers used tape and glue to attach a transmitter the size of a matchbox to a 10-week-old African penguin Friday. The 3-kilogram (6.6-pound) bird named Richie will be given a week to get used to swimming in a pool with the 30-gram (1-ounce) device before he’s released into the ocean from the southern tip of Africa. The first penguin in the project was released last month, and in all, five are to be released over a few months.

The African penguin, endearingly awkward on land and a gracefully efficient hunter in the water, is found only in southern Africa. It also is known as the jackass penguin because of its braying call. Tourists from around the world who have seen African penguins in a colony near Cape Town may not realize just how rare sightings are becoming.

The numbers of African penguins have plummeted from up to 4 million in the early 1900s to 60,000 as of the last census in 2010, said Venessa Strauss of the Southern African Foundation for the Conservation of Coastal Birds. The foundation has raised the penguins being used in the study.

Man is the reason for the drastic decrease, she said. Humans collected penguin eggs for food, ending the practice in the 1960s. The harvesting of penguin guano for fertilizer stripped a hard layer of the substance in which adult birds had burrowed to create nests safe from predators and the sun. More recently, a new threat came with oil spills and commercial fishing’s competition for the anchovies and sardines on which penguins feed.

Richard Sherley of the University of Cape Town’s Animal Demography Unit recognizes his South African team is in the very early stages of a long and complex process. They hope tracking the young penguins will answer questions about how early experiences influence the choice of breeding colonies.

“Not so much is known about the early life of African penguins,” Sherley said.

The tape and glue tracking device has been successfully used in studies before. The groups said the device should stay on the penguin for enough time, possibly months, to provide useful information.

Once scientists know more about the birds’ behavior, they will be able to choose a sight for a breeding colony that will suit them, and that will be protected and close to abundant stocks of food. Long-term plans include setting up a hatchery.

Strauss’s group raises chicks abandoned by their parents or orphaned as a result of oil spills. They strive not to tame the birds. The first one to be released, nicknamed Lucy, was “as wild as anything,” Strauss said.

“She bites. She’s quite a meanie,” she said.

The birds need to be tough. In the wild, parents simply stop feeding the chicks when they are big enough to begin fending for themselves, anywhere from two to four months after hatching. The young birds wander into the water in search of food, with no adults to teach them how to forage.

The birds start breeding between the ages of 2 and 6.

Birds raised by humans are sturdier because they are better fed. The Southern African Foundation for the Conservation of Coastal Birds tests them in the water to ensure they can swim well before they are released. But beyond that, their release experience is the same as that of a wild bird, Sherley said.

“The chick has to have an innate capacity to find food when it hits the water,” he said, adding that Lucy showed she could do that.

Strauss said the researchers have already gathered surprising data from Lucy about how far a young bird is able to swim. Lucy has averaged 28 miles (45 kilometers) a day. Using special glue and tape to affix tracking devices is standard procedure, and scientists expect the device to stay on long enough to give them good information.

“It’s fascinating, because we’ve never had this information,” Strauss said. “It’s crucial for us to know what happens to them.”

Such tracking might have given a fascinating look into the 2,000-mile (3,200-kilometer) journey an emperor penguin took from Antarctica to end up stranded on a New Zealand beach last month. The penguin, nicknamed “Happy Feet”, is recovering at the Wellington Zoo, where it underwent a medical procedure to flush out much of the beach sand it swallowed, apparently mistaking it for snow.

Wildlife officials plan to release the penguin in the Southern Ocean once he recovers.

The plains of North America couldn’t be further removed from Africa’s Cape, but conservationists there have managed to bring back species from “unthinkable numbers” using animals bred in captivity, said Martha Kauffman, director of the World Wildlife Fund’s Northern Great Plains program.

WWF researchers have reasoned with wary ranchers, fought disease and struggled to find habitats to bring the numbers of black-footed ferrets to about 1,000, she said in an interview. In the 1980s, there were just 18.

“What’s exciting is that we’re making good progress,” said Kauffman, who was not involved in the penguin project.

Olivier Langrand, a bird expert with the wildlife group Conservation International, cited dozens of examples, including successful efforts to bring back the California condor and the Arabian oryx.