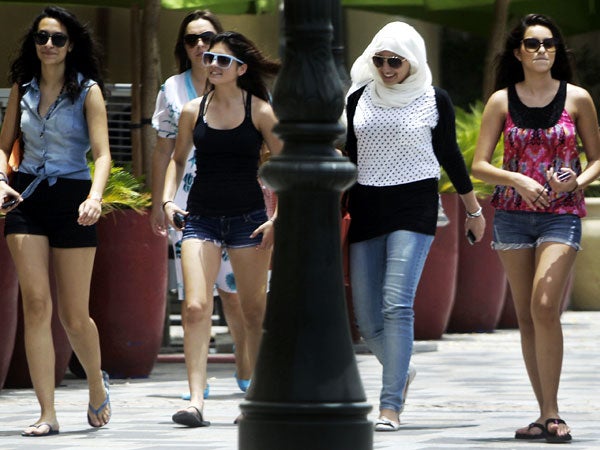 Women of different nationalities walk at the Jumeirah Beach Residence Walk in Dubai , United Arab Emirates. As the numbers of foreigners have increased, so have the stories of them violating the UAE's strict indecency code which limits drinking to bars and nightclubs and bans public displays of affection. AP

ABU DHABI, United Arab Emirates—With the number of foreigners dwarfing that of locals in her hometown of Abu Dhabi, Asma al-Muhairi has become increasingly anxious at the prospect of her younger nieces abandoning their full-length black robes in favor of Western attire that seems to be everywhere she goes.

But it wasn’t until the 23-year-old marketing worker came face to face with two scantily-clad female foreigners at one of the many luxury shopping malls in the United Arab Emirates that she decided to take action.

“While going to a mall, I saw two ladies wearing … I can’t say even shorts. It was underwear,” said al-Muhairi, whose black abaya — a long garment worn by conservative Gulf women — is offset by a gold Versace watch and egg-shell blue handbag.

“Really, they were not shorts,” she said. “I was standing and thinking: ‘Why is this continuing? Why is it in the mall? I see families. I see kids around.'”

Failing to persuade the mall to intervene, al-Muhairi and another Emirati woman, Hanan al-Rayes, took to Twitter to air their concerns in May.

They were inundated with responses that prompted them to launch a Twitter campaign dubbed (at)UAEDressCode that aims to explore ways to combat the growing number of shoppers in low-cut dresses and hot pants.

As the campaign picked up steam, it also has served to symbolize the growing concerns among Emiratis, a tiny minority in their own country.

Emirati citizens account for a little more than 10 percent of the 8 million people living in the Gulf nation. Most of the population is made up of Asian, African and Middle Eastern guest workers, as well as Western expatriates living here temporarily.

The overall population more than doubled over the past decade as the country embarked on a building boom that transformed Dubai, up the coast from Abu Dhabi, into the Arabian Gulf’s financial hub and a popular tourist draw.

“I think in an increasingly tumultuous region and in an era of powerful and often intrusive globalizing forces, citizens of the UAE are increasingly concerned that their traditions and core values are being eroded,” said Christopher Davidson, an expert on Gulf affairs at Britain’s Durham University.

“In some senses, it is a grassroots reaction to authorities and leaders that have for many years done little to check this erosion,” he added. “We’ve seen reactions to alcohol, so now we are seeing a reaction to immodest dress.”

Jalal Bin Thaneya, an Emirati activist who has embraced the dress code campaign, said it is a way for Emiratis to show they are concerned about the loss of traditions.

“If we were the majority and had the same make up, things would be different,” Bin Thaneya said. “You wouldn’t need anything. You would see Emiratis everywhere and you would be afraid of offending them … Now, we’re a minority so you feel the need to reach out to an authority.”

As the number of foreigners has increased, so have the stories of them violating the UAE’s strict indecency code, which limits drinking to bars and nightclubs and bans public displays of affection. A drunken couple was caught having sex on the beach and another allegedly having sex in a taxi. A Pakistani was deported for flipping the middle finger at a motorist, and the courts are filled with cases of foreigners having sex out of wedlock.

The malls, however, are a different story.

They are one of the few places where everyone comes together to escape the brutal summer heat. The cultural clash is hard to ignore, as families of traditionally dressed Emiratis shop and relax in cafes alongside foreign women wearing tank tops, shorts and even transparent gowns over bikinis.

Most malls have policies in place that require “conservative” dress and encourage shoppers to avoid showing shoulders and knees, but few publicize them or enforce them. Police in Dubai, where the mall that al-Muhairi visited was located, didn’t respond to a request for comment. They told the Gulf News newspaper there is nothing they can do since there are no specific laws against immodest dress.

“People were seeing it for a long time but they didn’t say anything,” Bin Thaneya said. “You can’t go to the police for such stuff. There is no one to go to. You can’t go to the mall management. The mall security guard gets paid less than someone at McDonald’s. He isn’t going to do anything.”

Al-Muhairi’s campaign is just one of several over the years led by Emirati women who have tried in vain to enforce the dress code — handing out brochures, confronting foreigners. But hers has benefited from the growing popularity of social media as well as the Arab Spring popular uprisings, which has given Emiratis a sense they can speak out on some social issues.

The UAEDressCode feed has more than 3,300 followers with a lively discussion that includes plenty of support for a code but also concerns that it would unfairly target foreigners or create divisions between locals and foreigners. Unlike similar campaigns in Kuwait or Saudi Arabia, the impetus for a code has not come from Islamic hard-liners, but from moderate locals like al-Muhairi who love their Starbucks and Western movies but just want foreigners to respect local customs.

“We are not asking others to cover up like us. We are giving them freedom based on their beliefs and religion,” al-Muhairi said. “We are not judging and saying this shows she has other interests. We never want to judge. Do whatever you want and wear what you want but with limits. Just respect the public here.”

The campaign has caught the attention of the Federal National Council, which pledged last month to push for stronger measures to enforce the dress codes. That came after the country’s culture minister, Abdulrahman al-Owais, supported efforts to emphasize the conservative traditions of the UAE.

Members of a half-elected, half-appointed council have suggested a law could include warnings and fines but not jail time for offenders. But the FNC has no law-making powers, so any decision now rests with the UAE government.

“If there is a law, the behavior will be different,” said Hamad al-Rahoomi, an FNC member who compared a UAE dress code to laws in France that bans the niqab, in which a veil has only a slit exposing a woman’s eyes, or the new dress code at Royal Ascot in Britain that aims to limit provocative outfits.

“We don’t want to catch people. We just want people to think of the other parties,” al-Rahoomi said. “What I want is to go with my family in my country and not see something that is harming me.”

The Abu Dhabi police issued this week a booklet on dos and don’ts for tourists that will be available at the Abu Dhabi International Airport and hotels, according to The National newspaper. It advises tourists that public displays of affection including kissing are considered indecent and that they should wear “modest” clothing.

Tourists — some in skimpy summer dresses, others in shorts and T-shirts — defended their right to wear what they want, either because it is fashionable or keeps them cool in the summer heat. None of the 10 people interviewed in Dubai and Abu Dhabi knew about a mall dress code, nor were they advised their outfits violated it. Several said a dress code law would go too far.

“I think it’s ridiculous because most of the people in Dubai are tourists,” said Sarah, a 21-year-old tourist from Kenya wearing a short dress exposing her shoulders and legs. “I want to go somewhere where I would be comfortable in my own skin as a travel destination. I feel comfortable like this and this is how I will dress.”