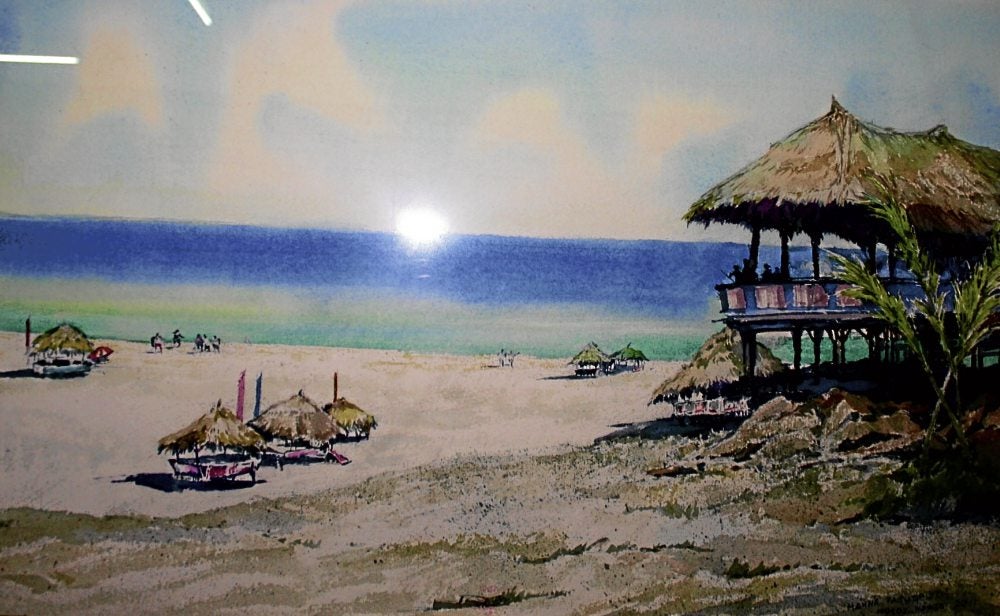 Fifty years of  Wong Shui Loong’s watercolors  brightened the lobby of Philippine Cultural College in Tondo, Manila,  during  the June 16 opening   of  the retrospective of this Baguio-born artist of Chinese descent.

Eighty-nine paintings of landscapes and seascapes  of  the septuagenarian artist’s favorite places in the Philippines—Boracay, Punta Galera and Fisherman’s Village in Cavite—as well as Vigan and Pagudpud in Ilocos,  Baguio, Banaue  and Tagaytay, and the lahar country, to as  far as Suzhou, Qingdao,  Hainan, Guangzhou and Shengfu in China, were exhibited at the artist’s alma mater.

They represent the 89 years of  existence of  the school formerly known as Philippine Cultural High School, which was the venue of Wong’s first solo exhibit in 1962.

He taught math at Mapua Institute of Technology from 1967 until his retirement in 1996 when he was conferred Mentor of the Year by the Mathematics Department, the first time such award was given by MIT in Math and Physics.

Wong’s avowed only hobby, painting, started during his primary art classes in Chinatown. His fascination for and appreciation of watercolor was further enhanced in high school under the watercolorist Yu Kengtong, who gave him lessons at home. Yu was a classmate at the University of the Philippines’ School of Fine Arts of  Fernando Amorsolo,  the first   National Artist in Painting.

In between classes, Wong Shui Loong was busy painting, entering and winning in  competitions  such as Shell Art Contest and Art Association of the Philippines.

Adjudged as one of  Top Five Watercolorists for three years, he was  elevated  to the Hall of Fame after his third win in Gallery Genesis’  annual Kulay sa Tubig watercolor competition in 1996.

Wong  smiles  when he remembers that all three paintings that gave him the  recognition were all Chinese seascapes (two  Fujian sceneries and one  Hainan seaside scenery), and signed with his traditional Chinese name chop.  The accolade had taken  more meaning in that the  seven judges   were all Filipinos.

Wong Shui Loong’s trademark watercolors show what he loves most from his country of birth and his ancestors’ hometown: seaside, blue seas, white sand and coconut trees of the Philippines; and mountain crags and ancient canals of China.

His strokes are very much influenced  by  traditional Chinese brushwork, although  he uses the technique of  watercolor painting that probably dates back to the cave paintings of Paleolithic Europe, and has been used for manuscript illumination since at least the Egyptian times, but especially in the European Middle Ages.

My husband and I first met the  artist in Beijing in 1986 when he and his wife visited us while we were busy packing for our return to the Philippines after the Edsa People Power Revolution. He was  together with  Shi Xueleng, our Chinese colleague at Radio Peking where we worked since 1971.

We later  attended his one-man exhibit at the prestigious China Art Gallery.  Then and now, he has consciously introduced the Philippines to the Chinese audience through his paintings of beautiful Philippine sceneries, even as he introduces Chinese sceneries to his Filipino audience.

At the time when emotions are running high about the maritime territorial disputes between China and the Philippines,  it is noteworthy to take stock of the initial efforts and continuing perseverance of artists like Wong Shui Loong to promote the artistic fusion and  cultural exchanges of the  two countries and the friendship between the two peoples.