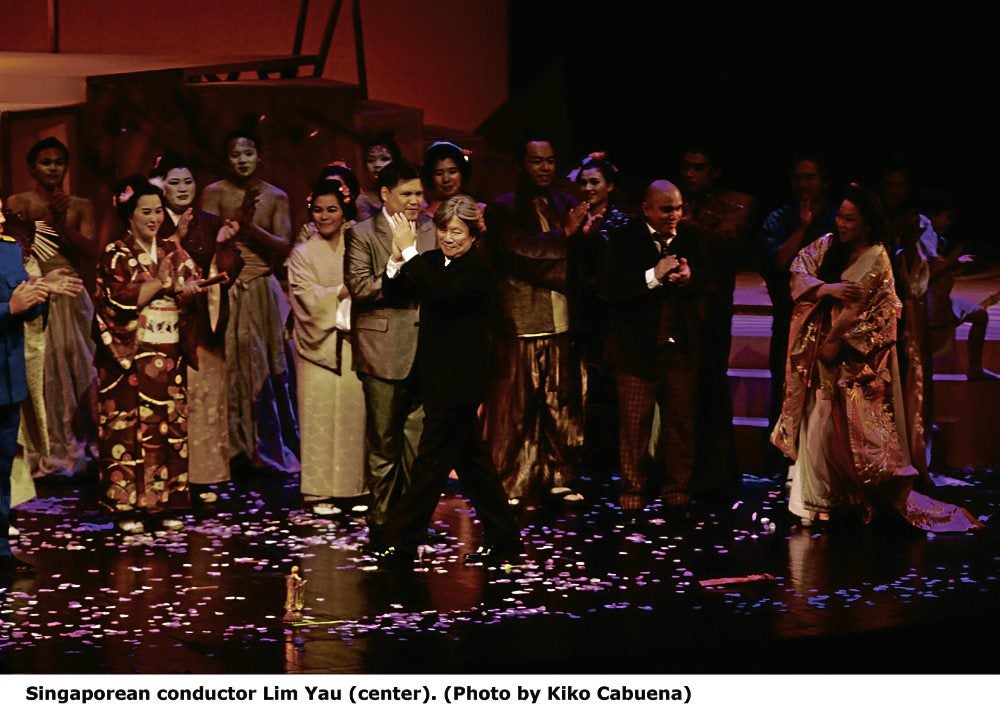 Editor’s note: This is the last  part of the author’s review of “Madama Butterfly,” staged recently at the Cultural Center of the Philippines; it deals with the opera’s musical aspects. The first part, which appeared  July 2, dealt with the theatrical aspects.

Puccini has the superb ability to dramatize his music at the right moment so as to stir the emotions.

He piles one effect upon another through brilliant orchestration. In rapid strokes, his music translates into a theatrical situation through a dynamic blending of arias, dialogue, action and orchestral continuity.

His music, therefore, is theater delivered in a symphonic manner. This is summarized by his philosophy: “My laws are those of the theater: to interest, to surprise, and to move.”

Needless to say, Puccini’s music seduces.  In “Madama Butterfly,” the thematic recalls in the last act are expressed like leitmotifs, providing unity and heightening the dramatic essence. Thus, the sung texts are scored with great melodic ease, and the orchestration that wrap them are rendered in a symphonic manner,  truly delightful to hear.

Possessing a great knowledge of the human voice, Puccini scores the vocal part with great ease and care, keeping the particular texture of different vocal categories for comfortable singing with maximum effect.

In the production, there was passionate singing. Unfortunately it did not entice—or seduce—to the hilt.

Soprano Mako Nishimoto essayed CioCio San’s role superbly with deep familiarity, acting it out  almost as if it were her second nature.

Her voice, however, did not show consistency in the passage. The top voice sounded tired, not gathered, betraying the elegance of its lower and medium ranges.

In the last note of the lyrical aria  “UN Bel Di,” she gave a shrill, forced-out rather than a well-aerated, brilliant high note. Moreover, it took her so many bars to be in rhythmic rapport with the orchestra that played in a singing manner and an unhurried tempo.

To sustain the high note, she cut spetto to emphasize the double consonants (which is the correct way of articulating it) with a palpable breath that was not kept in the dome.

This aria is highly lyrical, expressive of the heroine’s undaunted hope her beloved will return. The other aria, the suicide aria, in the last act reflects Cio Cio San’s heroic stance of honoring her dishonored life with death.

This is reflected in the vocal scoring of this suicide aria in a much heavier manner than the former that almost exudes death, which the Japanese soprano did quite well.

Mexican tenor Dante Alcala’s voice was overpowered through no fault of his own. It innately lacked the thickness of a Puccini texture. He could not be fully heard in his aria at the last act, “AddiO Fiorito Asil, ” and the trio with Suzuki and Sharpless.

The same was true in the first act, in his duets with Sharpless, “Do Vunque al Mondo,” where the baritone Andrew Fernando who sang without rein, almost drowned out Alcala’s vocal output.

Similarly, Alcala failed to match the soprano’s palpable texture in the love duet with Cio Cio San, “Bimba Dagliocchi Pieni di Malia,” which is one of the  tenderest love duets in opera literature.

Fernando’s voice towered all right. But he has yet to learn how to color it, to warmly delineate dynamics from soft to fortissimo, and add brightness in the high register. Keeping the voice on just one level of dynamics would not entice much. In rhythm, he sang his role out with abandon.

Camille Lopez was a revelation! Although she had correctly redeemed her voice out of its mezzo mold a long time ago and now sings as a lyric soprano, she intelligently sung her role out and showed keen versatility, coloring her top as well as low notes to show an appropriate mezzo texture.

She forged tight rapport with the other singers in the ensemble numbers marking her singing with gracious charm. She caressed her brief solo parts, and intoned her duo and trio with utmost elegance in consideration of the other voices to bring out the ensemble’s striking balance.

Her duet with Cio Cio San in “Tutti i fior,” was the best ensemble: comfortable, and well balanced. Throughout, she was ever mindful not to vocally upstage the Japanese soprano.

At the pit was the Singaporean conductor,  Lim Yau, who did an admirable job. He waved his baton decisively and dished out brilliant, soaring tones; in fact, more legato than the singing on stage.

Francisco Feliciano, himself an opera composer, was musical director.

The rest of the cast, including the chorus, the UP Manila Chorale, contributed to the success of the production.