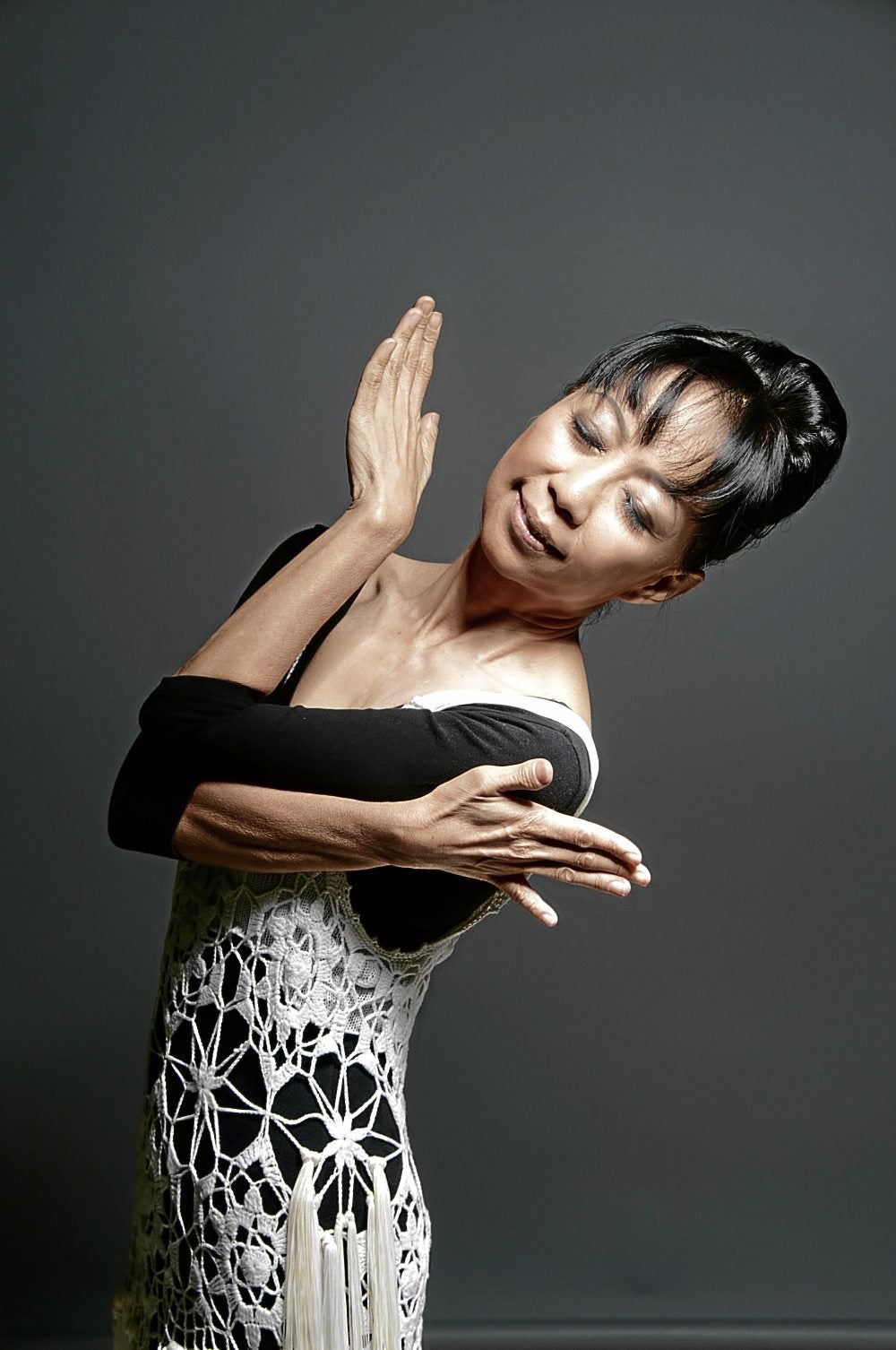 THE AUTHOR in a moment of rapture. Crocheted dress by Michele Sison; hair and makeup by Angelo Justin. DENISE WELDON

My ‘Lightbulb Moment’ with Douglas Nierras and Bart Guingona

Douglas Nierras is a luminescent choreographer: He could set his dancers ablaze.

But to say that I was challenged by him was an understatement. As a journalist, my life revolves around cold, hard facts, so it’s an effort for me to immerse myself in the theater, in the world of the imagination and emotion.

The experience of being spontaneous could be quite daunting.

He would see my dour expression and tease me, “You should look at pictures of naked men!”

Joke aside, Douglas once pointed out that dancing  and writing have similarities—expression and dynamics.

What made a dancer’s performance  riveting is the combination of intensity, rhythm  and movement. Similarly, dynamics in writing is in the details, sentence cadence and emotion, as opposed to just reporting dry facts.

For several years now, I have been working with director Bart Guingona and Nierras in my dance concerts. I have always been inspired by the lectures and books of life coach Dadi Janki, who is the “World’s Most Stable Mind,” because her mental state reportedly remains completely undisturbed.

In tests conducted by the Medical and Science Research Institute at the University of Texas, her brain waves were found to be as relaxed both in deep sleep and in activities. She has always said that her equanimity is based on seeing only the goodness in every individual and acknowledging “the Supreme as the Source of all power.”

The themes of my dance concerts have always been about  the independent spirit looking deep within the self.

This year’s concert, “A Lightbulb Moment,” which will be held July 10 at Onstage, is a series of short dances that are evocative of spiritual wisdom.

Dance videos, directed by Gino Parma of Indioboy Productions, will provide a multimedia dimension to the dance concert.

In every show, Impy Pilapil creates a sculptural installation. For this concert, Japanese designer Wataru Sakuma provided his paper art to enhance the set.

Douglas Nierras always tries to introduce some novelty into his choreography such as interacting with Impy’s sculptures in the videos. What I find refreshing is that Douglas has defined his own parameters of what makes a good dancer, which is basically performing from the heart and being free from the narcissism of classical training.

Although Douglas has been associated with jazz because of his experience in TV and commercial work,  the style of  his choreography for his company, Powerdance,  is steeped in the Martha Graham tradition. His theatrical background also influenced his dancers to follow their instincts in order to act out their movements.

When we rehearse, Douglas is always looking for the inhalation or the release of movement which contrasts with my tensions coming from work pressure. He often reminds me not to hold myself back.

Moreover, he advises me that letting go infuses a lyrical quality and a fearless abandonment to a choreography. He wants his dancers to discover how to imbue each movement with meaning so that rehearsals are like acting classes without dialogue.

Douglas’ basic precept is that dance should touch the audience through a visceral reaction because movement expresses inner feeling. He wants his choreography to be an experience rather than a performance to be viewed and accepted intellectually.

Nierras isn’t impressed if the dancer can jump six feet off the ground, spin like a top or contort the body beyond imagination. The feat doesn’t matter if the dancer lacks intensity and purpose or does not touch the audience.

Then again, it’s very difficult to come to a rehearsal, coming cold from journalistic work. It would take up some time for me to warm up and absorb his instructions.

After Douglas had set his choreography for “A Lightbulb Moment,” he and his company left for a European tour. Director Bart and I worked on the spoken line. I told Bart how frustrating it was to combine making a living and pursuing an art, particularly taking the risk of a live performance.

He admitted most artists have to face certain realities, but those should never be a hindrance to enjoying the art or even giving up on it.  What he said became an impetus for my lightbulb moment: