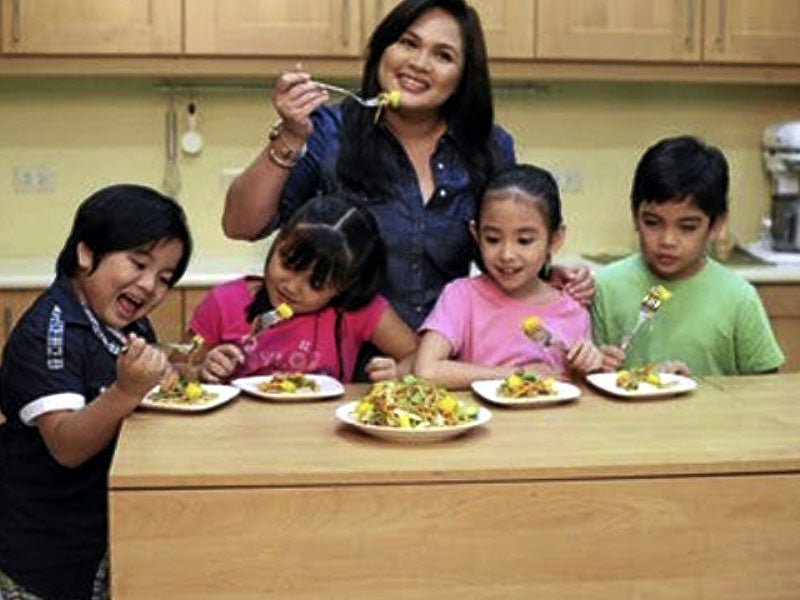 Now serving: Kids in the kitchen

Knives, hot stoves and children do not a good combination make. But  two local television shows are out to  break this perception and encourage parents to let loose their kids in the kitchen.

GMA’s “Amazing Cooking Kids” and ABS-CBN’s “Junior Masterchef” pit young chefs against each other in a competition for kitchen supremacy, as they plan, execute and plate gastronomic delights.

“ACK” is an original concept brought to life by GMA, while “JMC” is a local take on a successful international franchise. But both reality cooking competitions take advantage of the Filipinos’ love for food and their affinity with kids on television.

Actress Carmina Villaroel, “ACK” host, tells SIM how appropriate the show’s title is because “the kids are really amazing. I couldn’t believe they’re such great cooks. I’ve learned a lot from them just by watching how they move around the kitchen.”

“JMC” host Judy Ann Santos echoes this sentiment. “They already know a lot of techniques that I only got to learn when I took culinary arts,” exclaims the actress.  “Another thing that surprised me was how the kids come up with names for their dishes. They’re names you’d associate with a fine dining restaurant,” she adds.

But no matter how good they are, the young chefs must face the day of recknoning when one of them gets eliminated.  This, Villaroel and Santos admit, is the most difficult role they assume in the shows. Telling children they are no longer part of the competition pains them both, but the two actresses reveal that their experiences as former child stars help them cope with this challenge.  Being mothers now doesn’t hurt either.

They have to be extra careful when delivering the bad news to the kids and must help the youngsters accept their fate, the two women add.

“I’m a touchy person, so I hug and console them. I tell them it’s still okay and it’s not the end of the world,” Villaroel shares.

Santos explains: “I’m extra sensitive in dealing with these kids because I know that whatever I tell them now, they will bring with them until they grow up. I don’t want them to be bitter towards me when they become adults.”

“ACK” production manager Jenny Corcuera-Reyes tells SIM that they provide counseling to the eliminated kids. A child psychologist is always on standby to cushion the blow.

The program’s chef-judges also approach the parents to tell them why their children failed to advance to the next round.

“JMC” director Connie Macatuno  cites communication as key in making both children and parents accept the elimination and to understand that this does not mean an end to the  kids’ culinary ambitions.

“As in everything else, it’s also about the timing. Maybe it’s not yet the time for the kid to excel,” says Macatuno, a mother herself.

The  adults on the set are expected as well to mind  their manners, she adds.  The use of foul words and gay lingo on the set is prohibited. “We have to set the example to these kids. They look up to us,” she explains.

Other than the psychological and emotional support showered on the kids, the two competitions also employ other measures to make the programs more kid-friendly.

Chef Rosebud Benitez, one of the judges in “ACK,” says the young competitors are given ceramic knives “so they don’t have to apply more pressure in using it. It helps in reducing the risk of using knives.”

And though most chefs prefer using conventional gas stoves, kids in “ACK” use electric stoves “because they are safer,” adds Chef GV Barlao. Chef Jackie Ang-Po, meanwhile, says training the kids in handling cooking implements also reduces the risks that come with cooking.

But all three chefs agree that adult supervision is  very important to make  cooking safe for kids.

Aside from having  safer induction cookers for use in the show, Dyogi advises parents about the need for constant guidance as the children’s best protection in the kitchen.

Dyogi laments the exodus of parents abroad as OFWs, making it more difficult for children to explore the kitchen, which is now dominated by househelp and nannies.

Villaroel recalls helping her grandmother prepare cookies when she was a young girl. Benitez, meanwhile, recounts feeling obligated to help in the kitchen as a kid.

“It felt more of a chore so I really didn’t enjoy it that much,” the TV chef quips. Make kitchen chores enjoyable to encourage children to participate in cooking, she suggests.

“JMC” judge Chef Rolando Laudico finds it very Filipino to have children helping out in the kitchen.  “Everything’s happening in the kitchen. People are there to have a good time and social interactions.” He adds: “The kitchen is one area of the house where you’ll see everyone, from kids to lolos and lolas.”

Parents should encourage their children to explore their fields of interest, whatever that may be, including culinary arts, says Santos. “There’s more to life than just playing computers, PSP or Facebook,” she adds.

Ang-Po, meanwhile, advises   parents to take their children to restaurants and not just to fastfood joints, “to make the children familiar with a wide range of cuisine.”

With the wealth of dining and learning options readily available to parents and their kids, the people behind “ACK” and “JMC” believe that the two reality cooking shows can help push a culinary revolution among children.

“We hope to inspire not only children, but also their parents, to hone their cooking skills,” says Reyes.

Says Dyogi:  “The confidence that the kids gain from their (TV) exposure could lead them into thinking that their lives can change with the simple act of cooking.”

“ACK” has already wrapped up its first season, while “JMC” is set to air in August.