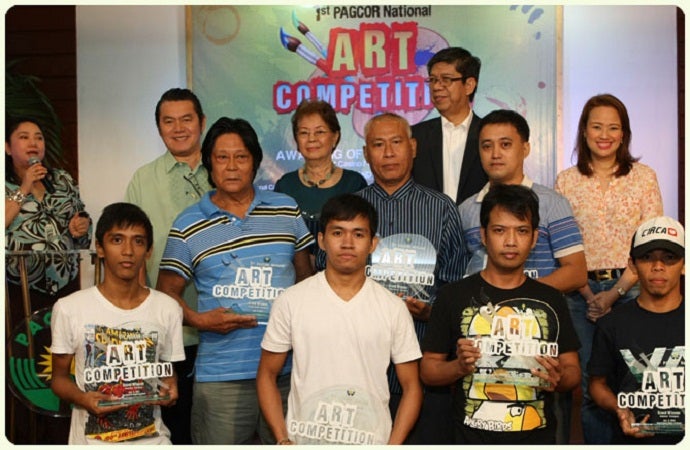 The grand winners for the professional category were Bernardo Hermoso, a 69-year old painter from Cebu City; Manuel Yutuc, a 64-year old painter from Pampanga who was also awarded the Most Outstanding Kapampangan in 2000; and Rommer Fajardo, a 33-year old part-time Arts professor from the Technological University of the Philippines (TUP).

The winners were chosen from over 600 competition entries from all over the country.

The top 10 qualifiers for the region, five each for the professional and amateur categories, moved on to the grand finals after being chosen from Pagcor’s regional screenings in its Casino Filipino branches in Angeles, Cebu, and Paranaque from June 19 to 25.

Pagcor President and COO Jorge Sarmiento, during the awarding ceremony, said the competition enabled many artists to show their talent and creativity in the field of visual arts and that it would continue the competition to give more opportunities for Filipino artists.

“Nagagalak ang PAGCOR sa ipinakitang galing at talent ng mga Filipino artist. At dahil dito, ang Pagcor Board ay kumbinsido na dapat itu-tuloy tuloy po namin itong art competition bilang ambag ng Pagcor sa promotion ng arts and culture at upang mabigyan ng pagkakataong mas makilala ang ating mga budding at professional artists (Pagcor expresses joy in the talent shown by the Filipino artists. Because of this, the Pagcor Board is convinced that it should continue holding the art competition as Pagcor’s contribution to the promotion of arts and culture and to give more opportunities for budding and professional Filipino artists),” he said.

Ben Cabrera, National Artist for the Visual Arts who was also one of the jurors during the final judging of the Top 30 entries, noted that the competition could boost local tourism since it used the tourism slogan “It’s More Fun in the Philippines” as its central theme.

“I advise aspiring artists to join competitions such as this to showcase their work and to be challenged,” he added.

Sylvia Amorsolo-Lazo, daughter and authenticator of the works of the country’s first National Artist Fernando Amorsolo, who also served as a juror, said that art contests like the one staged by Pagcor boosted the morale of Filipino visual artists.

“If my father was the one who judged these entries, he’d be very happy to see these realistic masterpieces. It’s hard to judge. It’s just unfortunate that we cannot make all of them win,” Lazo said.