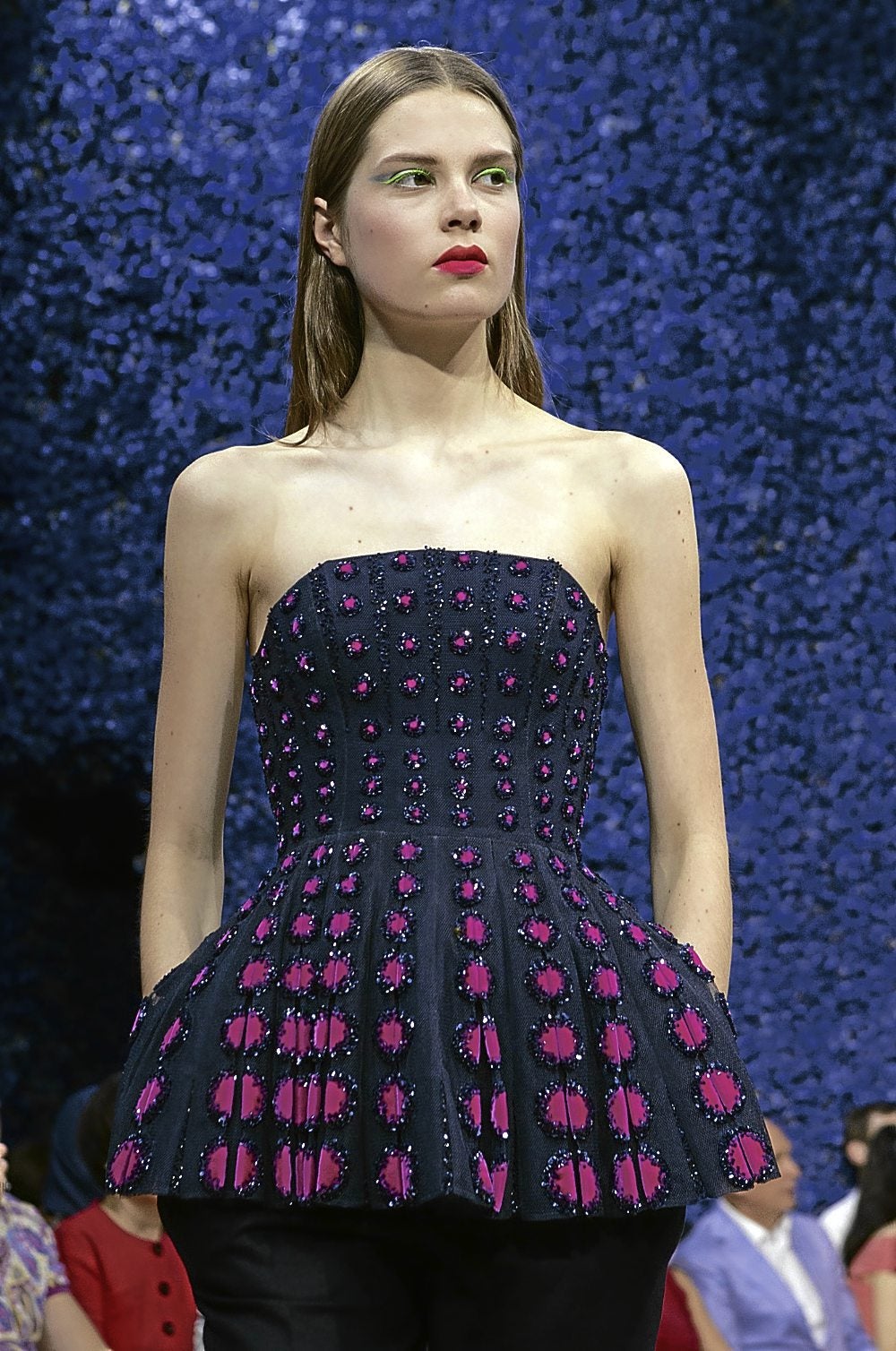 Fashion peers Elbaz, Cardin, Alaia, Furstenburg, Versace, Jacobs and Tisci watched a 54-piece collection weave its way in and out of five palatial rooms festooned from floor to ceiling with varied blooms, from white orchids to yellow mimosa and blue delphiniums. Simons made international style editors and couture clients realize that the future of fashion springs from the past. But once it’s realized, one must forget the past.

So like the revolutionary New Look of Christian Dior in 1947, Simons manipulated the iconic Bar Jacket with rounded shoulders, wasp waist and padded hips on full circle skirts.

This new New Look was reinvented as coat dress, pantsuit in his trademark minimal architectural lines. There were also short-and-sweet dresses, cut like a chopped-off ballgown and worn over skinny black pants.

But it was his intense, pulsating use of color that was the main focus of this couture de force collection that deconstructed the rules of Dior signature looks.

But it wasn’t like the take-it-apart deconstruction of the ’90s, but rather it was the concept of abstracting just one Dior code at a time.

Simons achieved the bravely impossible, a bow to the heritage of the House, yet making the clothes so supremely elegant and comfortably appropriate for this point in fashion history.

Simons says the focus of his first collection for Dior was to “change the psychology of people who are interested in couture. I want to make it more dynamic, appeal to a person who has a different energy.

“A younger person, in mind, not necessarily in age. And I think couture is very much about curating something unique for women. Fashion is so mass-produced now; I hope there will come a refocus on how people see couture. And I would also hope for a new focus on the craft.    It’s mind-blowing when you start investigating what is done here. But I want to approach it with a new energy. I’m interested to see how people will pick up on it.”

The result of last Monday’s show was a selection of ideas by a designer with a rare aptitude: to meld modernity with romance.

Another page is turned in fashion history, from Christian Dior’s extraordinary rise to the throne of couture in 1946 to his untimely death on Oct. 23, 1957.

His youngest assistant designer, Yves Saint Laurent, was promptly put in charge of the most famous and important couture house in the world. Laurent was rudely replaced by designer Marc Bohan in late 1960, and Bohan stayed on until Gianfranco Ferre took over in 1989, who was then succeeded by John Galliano in 1996.

With just five designers in 64 years, Dior certainly carries an aura of majesty, a magical place that is larger than life, now reinvigorated and remastered by Raf Simons, the once and future king of French haute couture.