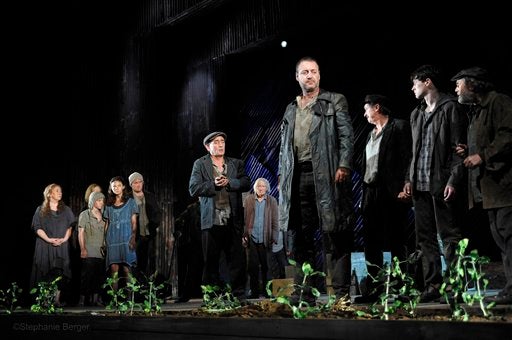 NEW YORK — What does it mean to be Irish after an era in which the governing powers make a deliberate attempt to destroy Irish national identity?

“DruidMurphy” is a compelling trio of plays by renowned Irish dramatist Tom Murphy that span 25 years of his career, set between 1846 and the early 1970s. Directed by Garry Hynes for Galway’s Druid company as part of the annual Lincoln Center Festival, the ensemble is strong and moving in these often brutally realistic productions.

With dark humor, Murphy examines the continuing psychological and spiritual repressions that inform everyday Irish life more than 150 years after the potato famine era, as these plays explore themes of national identity and the impact of continuing emigration. The cycle is being performed at the Gerald Lynch Theater at John Jay College.

In “Conversations on a Homecoming,” a group of disillusioned thirty-something men gather to reminisce in their small village pub in County Galway in the 1970s. Cynical, bitter schoolteacher Tom (a strong Garrett Lombard) jousts with his proclaimed good friend Michael (a nicely callow Marty Rea), who fled to America to be an actor, and has returned home for a visit after a 10-year absence. All the characters make sure to point out one another’s flaws or troubles, as the drinks flow freely. Their individual failures to escape their dreary circumstances in the idealistic manner they once envisioned is encapsulated in the bar as a microcosm of typical Irish difficulties. Repression by the narrow-minded Roman Catholic church, lack of economic opportunities and propensity for drink are all given their fair share of blame, interspersed with wry humor and moments of song that give hope for possible redemption.

“A Whistle in the Dark” set in 1960 Coventry, England, is visceral in its unrelenting brutality. The fighting Irish Carney clan has emigrated in stages, regrouping at their peaceful brother Michael’s small residence, to the growing dismay of his English wife Betty (Eileen Walsh, despairingly strident). Marty Rea is strong as Michael, the family intellectual, mocked by his father and four brothers as a coward for his lack of interest in defending the family honor with violence. The three most thuggish brothers, led by a sneering Aaron Monaghan as Harry, are needling bullies and petty criminals. Niall Buggy is spellbinding as family patriarch Dada, who pits his sons against one another and attempts to build a falsely heroic mythology around their mindlessly violent behavior. The final image is a deeply touching Pieta-like tableau of tragic regret.

The final play in the trio, “Famine,” is presented with a heavily stylized dose of sentiment and melodrama, as tableaux of agonized, dying people create a sense of inevitable doom. Set in County Mayo in 1846, the play charts the impact of the potato famine on members of a rural community. The increasingly harrowing presentation shows politicians and landowners launching a callous policy of mass emigration on so-called “coffin ships” to remove the starving populace, whom one casually refers to as “dirty monkeys.” The toll of physical and emotional famine ravages not only individuals like the despairing tribal chief, John Connor (Brian Doherty), but lays the groundwork for future generations who will inherit the mantle of struggle.