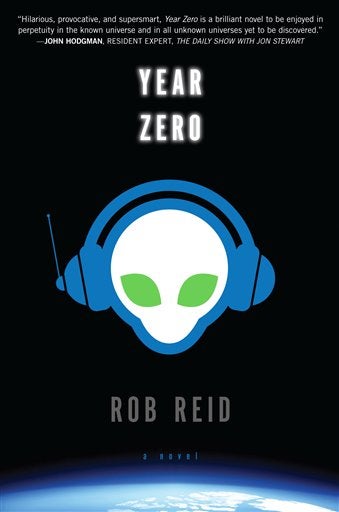 Rob Reid, founder of the company that created the digital music service Rhapsody, has created a hilarious story that spans the universe and the popular culture of Earth’s citizens in “Year Zero.”

Nick Carter works as an attorney for an entertainment firm. He worries about losing his job and how he can get his cute neighbor to notice him until the day Frampton and Carly walk into his office. They aren’t from around the neighborhood, to say the least.

A television signal with a 1977 episode of “Welcome Back, Kotter” was intercepted with cosmic results. Soon after, the entire universe was illegally downloading all of humankind’s music. As the fines escalate, the various races discover they must either declare bankruptcy or destroy the Earth to escape the monetary penalty. Frampton and Carly hope Carter can save the day with his legal skills and musical abilities (they think he was in the Backstreet Boys).

Evil parrots, heavy metals and a boss from hell only add to Carter’s woes.

Reid’s extreme imagination never wanes as he builds an entire universe solely on how alien societies would react to our music and culture. Nothing is typical or obvious. Reid uses the lens of an outsider to unleash a sarcastic — and hilarious — rant on how obsessed we are with technology and greed.

In some ways, “Year Zero” calls to mind Douglas Adams’ classic “The Hitchhiker’s Guide to the Galaxy.” Far from a clone, though, the story is fresh, clever and funny on its own.