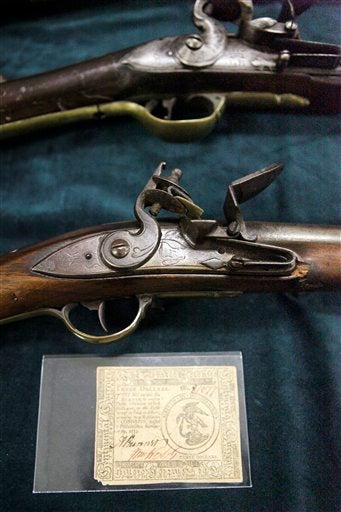 In this Thursday, June 28, 2012 photo sits a 3 dollar bill, along with an American, bottom, and British-made musket from the revolutionary period, near Philadelphia. This artifact and others hidden treasures will remain under wraps in their anonymous location until late 2015, when The Museum of the American Revolution is scheduled to open in Philadelphia's historic district. (AP Photo/Brynn Anderson)

PHILADELPHIA — A nondescript building on a quiet street somewhere outside Philadelphia holds a secret stash of treasures that have been waiting patiently for more than a century for a permanent place to call home.

Carefully stacked on shelves, hanging on walls and spread out on tables in a large climate-controlled room are thousands of artifacts from the Revolutionary War. They will remain under wraps in their anonymous location until late 2015, when The Museum of the American Revolution opens in Philadelphia’s historic district.

He recently discovered, as one example, five law books among the hundreds of storage boxes inscribed with the owner’s name: Patrick Henry. More digging unearthed estate and auction records verifying the books belonged to the Founding Father known for his “give me liberty or give me death” speech, and not someone with the same name.

“It’s not just inventorying; some of it literally is you find a piece and 6 months later, a year later, you find something else,” Stephenson said, “and you triangulate and boom — it’s one plus one equals seven.”

The collection was started by the Rev. W. Herbert Burk, an Episcopal minister and George Washington enthusiast who founded the Valley Forge Historical Society in the early 1900s. That group is the predecessor of the American Revolution Center, a nonprofit and non-partisan group working to raise $150 million to build the 110,000-square-foot (10,220-square-meter) museum.

The Oneida Indian Nation on Wednesday announced a $10 million gift to the museum in honor of Oneidas who fought alongside the Continental Army against British forces. The donation comes in response to a challenge from Philadelphia media magnate and American Revolution Center chairman H.F. “Gerry” Lenfest, who last month said if the museum can raise $40 million he will match it.

Among the roughly 3,000 artifacts waiting in the wings include all manner of muskets and rifles, textiles, cups and canteens, art, books, periodicals and manuscripts.

The item that started the whole collection will be a highlight of the museum: Gen. George Washington’s sleeping and office tent. The 20-foot(6.1-meter)-long canvas marquee — a little like an outdoor Oval Office — was purchased in 1909 from Mary Custis Lee, Martha Washington’s great-great-granddaughter.

“The objects are the witnesses, the touchstones for stories about extraordinary people and circumstances that can be incredibly powerful,” Stephenson said. “There’s plenty of drama, plenty of things that resonate in our own lives, plenty of aspects that are completely foreign to the way we think or what we’ve experienced.”

Experts are currently developing how the exhibits will look. The idea is to make the Revolutionary period real and relatable to visitors, “not just looking at a bunch of, you know, old brown things on a wall,” Stephenson said.

“Although I do love those old brown things, absolutely,” he said with a laugh. “But you can’t just do a beautiful building and decorate it with objects. The era in which you could line up a bunch of tea cups on a shelf is just not with us anymore.”

After a contentious plan was nixed to build the museum at Valley Forge, about 20 miles (32 kilometers) outside Philadelphia, the American Revolution Center and the National Park Service made a land swap that kept Valley Forge National Park as-is and brought the museum to Philadelphia. Its future home located steps from the National Constitution Center, the Liberty Bell, Independence Hall and Carpenter’s Hall should benefit all the institutions through program collaborations and artifact exchanges, Stephenson said.

Gordon Wood, Pulitzer Prize-winning author and scholar of the American Revolution, said while Valley Forge is of especially keen interest to military buffs, the Revolution “infused into our culture everything we believe in: liberty, equality, constitutionalism, all our noblest ideals.”

“It should be in Philadelphia because that’s really where it all began,” Wood said. “It’s going to be more than the military history, that’s a limited view of the Revolution and it has to be seen in its broadest context.”