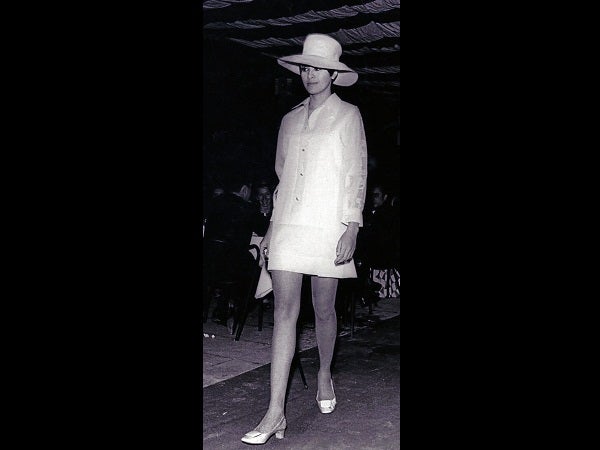 No way to explain paradox of rich beauty queen/revolutionary

Toni Parsons was only too willing to grant the request of her bosom friend, Maita Gomez, that the latter’s remains be placed on a “stretcher,” instead of in a coffin. On Friday, as the Inquirer was interviewing her on the phone, Parsons was in a rush to go to the funeral parlor where she would be arranging the bier that would carry the body of Gomez who had died the afternoon before.

“She must have thought a coffin too elaborate or expensive. So she told her children early on that she would prefer that her body lie in state on a stretcher,” she said.

“I will use all white roses to cover (the stretcher) and they would be like a mantle (on which Maita’s body rests). Just like that of Grace Kelly (the actress and Princess of Monaco),” said Parsons, who pioneered floral styling in the Philippines and is renowned for her lovely flowers and gardens.

Gomez died presumably during an afternoon nap last Thursday. Even in death—at 65, not 64 as previously reported—she  shunned the extravagant ways of the class she was born into and embraced what to her would be the simple and unadorned, in this case the “stretcher.”

Even to people who knew her and were familiar with how she embraced the life of a revolutionary, Gomez’s preference for a gurney, over a coffin, might still come as a surprise.

But then the entire life of the 1967 Miss Philippines Maita Gomez was a surprise to Philippine society.

To anybody, rich or poor, who was old enough to read the newspapers and watch television in the 1960s and 1970s, Gomez was always big news—in reality, a paradox society couldn’t quite explain fully.

Why would a girl like her, who had everything, give all that up—including husband and child—to live and fight in the mountains?

Born to the landed clans of both her mother (Favis) and father (the Gomezes of Pangasinan), Gomez was bred in exclusive girls’ schools—Assumption, where she was said to be in the same batch as former President Gloria Macapagal-Arroyo. She became one of the country’s top models, then won the Miss Philippines title in 1967 and represented the country in the Miss World contest in Britain. She married into the prominent Perez-Rubio clan, and with husband Carlos (Cookie) had a daughter, Melissa.

For two decades in the 1960s and 1970s, young women from the wealthier classes—such as Toni Serrano (later to marry Parsons), Maita Gomez, Trina Yujuico (later to marry Kalaw), and immediately before them, Conchitina Sevilla (later, Bernardo), Pearlie Arcache (later, Morales), Cherry Pie Villongco, Joji Felix Velarde—were the toast of society and media. They had the social pedigree and breeding, the elite education, the stunning beauty and regal bearing that made them the perfect mannequins of social dowager Conchita (“Tita Conching”) Sunico who ran the Karilagan cultural group, and of couturier Jose “Pitoy” Moreno. Sunico and Moreno would stage fashion shows for the local and international elites.

Moreno in particular would take these beautiful young women with him when he toured his fashion collections to various foreign capitals, from Tokyo to Paris, where they would model his designs before elite audiences that included royalty and heads of state. To the world, women like Toni Serrano and Maita Gomez symbolized the beautiful Filipina.

The allure of today’s “it” girls could never compare with the glamour and elegance of these women, which was innate and not the product of big-brand marketing.

However, these women didn’t stay in the limelight indefinitely. They married into families just as prominent as theirs, raised families, pursued their individual interests—but in a low-key manner, as was expected of them.

Gomez, however, broke the mold. After she married Perez-Rubio—dressed in an iconoclastic Pitoy Moreno bridal mini dress—and gave birth to a daughter, she joined the communist, or the national democratic, movement that was gaining ground in the 1970s and went underground.

“I think the turning point for her was the typhoon that devastated Central Luzon in the early 1970s (‘Yoling’),” Parsons recalled.

“She saw the suffering of people (as she went to the typhoon-devastated areas) and decided to up her level of involvement in the movement.  She went full-time and underground,” she said.

Sometime after taking off for the mountains, so to speak, Gomez returned to get her daughter Melissa who was about four or five at the time. Her former husband had a second family by then. Melissa spent her childhood years underground, a toddler romping around in the rebels’ jungle lair—or at least that was the image that played in the minds of the Establishment that Gomez had left behind.

Interestingly, through all those years, the friendship between Parsons and Gomez somehow survived. Parsons would get feelers or messages from Gomez, just to touch base.

Parsons recalled one particularly dramatic episode: “She sent feelers to me one day, asking to borrow our home in Baguio—their family also had a house in Baguio, by the way. She said she wanted to rest. We let her use the house in Baguio. Soon after, while our family was in New York, we suddenly got a call from the military wanting to interview us about our ties to Maita. Turned out, they had found printing paraphernalia in our house. By then, Maita had escaped with Melissa.”

It is touching how Parsons looks back on such exciting episodes in her and her friend’s lives, not with regret or a sense of outrage, but with nostalgia and affection. Their friendship must have been such as to cut across circumstances and time.

She and Gomez were supposed to have dinner last Tuesday, or two days before Gomez died. The dinner did not push through because one of their friends couldn’t make it.

The two had known each other for more than four decades, going back to the 1960s when Conching Sunico would round up Manila’s pretty young women in her house, to see who among them would make good models.

“Maita was 5 ft 11, with a regal bearing, so she really stood out anywhere … she and I lived in San Lorenzo (Village in Makati) so we were together often, even in Pitoy’s shows in the United States and Europe. Maita was even sent to June Daly Watkins finishing school in Australia to train in modeling,” Parsons said.

Before the first Edsa People Power Revolution in 1986, Gomez sent feelers to Parsons expressing a desire to resurface, to end her life in the underground.

“Angel Ramos, the daughter of Gen. [later President] Fidel Ramos, was a friend so through her, Gen. Ramos facilitated everything,” Parsons recalled.

“We went to his house. By then, Maita was pregnant. She looked like she had gone through a lot. Even her teeth were bad. Ramos took her under his wing, put her in the military hospital where her medical needs were taken care of. She gave birth to Luis, her son with a man in the movement who was killed in an encounter,” she said.

By the time Gomez rejoined society, her daughter Melissa was already 10. The girl was reunited with her father’s second family, then already based in the US. Melissa herself would grow up to be a stunning beauty, a favorite cover girl of the lifestyle glossies and commercial ad model. She would have a brief stint in show biz where she would also be linked to a handsome young actor, Richard Gomez.

Back in mainstream society, Gomez moved in political or nationalist circles. She married musician activist Heber Bertolome, with whom she had two sons. She took up a master’s degree in economics at the University of the Philippines. Through all this, she was in the protest or reform movements, even as she shied away from the limelight. She never really returned to the glamour world.

“When the mother of Conchitina (Sevilla Bernardo) died a few years ago, I was able to convince her to come with me to the wake, telling her that Nang Sevilla did so much for us. As a society editor, she wrote so much about us,” Parsons said.

“Maita went with me, and you could see her bearing. The moment she walked into the room, heads turned. She still looked stunning, yet simple. People rushed to her, welcoming her back. But I felt she really didn’t like that [kind of] attention in that social milieu. It made her an introvert that night,” she said.

While she didn’t enjoy high society anymore, Gomez embraced political causes. She ran for a congressional seat in the fifth district of Manila in 1987, but lost.

“I believe she really could have won that election. Her official name was Maita Bartolome, yet people knew her as Maita Gomez. So many ballots bearing Maita Gomez were nullified,” Parsons said.

Her marriage to Bartolome ended. She had another relationship, and had another son. In the succeeding years, she had strong advocacies, particularly for the environment, taught economics at De La Salle University, and worked with nongovernment organizations.

She had five children (not four as previously reported). Melissa, the only girl, is now married to Marcelino Ugarte, a corporate executive with whom she has a daughter and son. Eldest son Luis has a child. The three other sons are Antares, Cris and Michael.

“She raised her children well, sent them through school,” Parsons said.

“While she was born to a wealthy, landed family, with properties as well [the landmark Ramona Apartments in Manila belongs to the clan of Gomez’s mother], she also struggled to bring up her family,” Parsons said.

“It’s been a tough life. You admire her for that,” she said.

Gomez’s mother, the former Cecilia Favis, is now more than 90 years old. She has outlived her two daughters; another daughter, Ditas, died little more than a month ago.

Asked just what kind of person her friend Maita really was, Parsons said: “She really does what she believes in. You can’t ever sway her.”

To Maita Gomez, the beauty queen-turned-revolutionary, life was about decisions and choices made. That must have been one life worth living.

The Left held her up as a symbol of the Filipino bourgeoisie awakened to a nationalist consciousness to fight for the masses. The military—indeed the Establishment—used her also, after she resurfaced from the underground, as an example of how a rebel could return to the mainstream of society and work from there.

(Gomez was cremated on Friday night. A funeral mass is scheduled for 11 a.m. today at the Funeraria Paz at the Manila Memorial Park, Sucat, Parañaque. Burial will follow at the family mausoleum.)