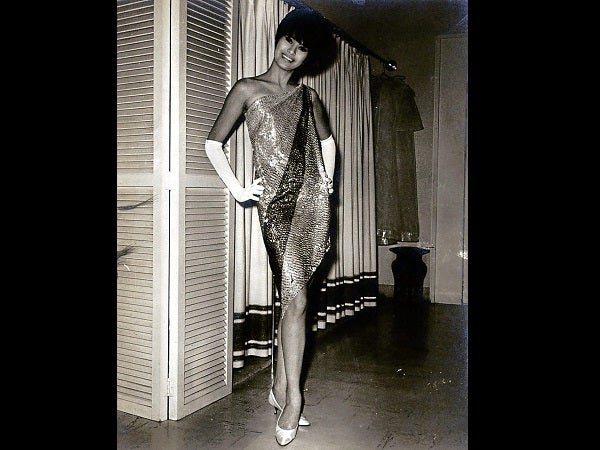 But she was of an era when revolution consumed people of her generation, even women of her status. While she modeled and competed in beauty pageants, was so much admired for her beauty and grace, and was sought after by men of wealth and stature here and abroad, the First Quarter Storm exploded in the streets of Manila.

Think of the late ’60s and early ’70s as the years of chaos and strife. Students were engaged in violent street battles against armies of police and soldiers—from the wide avenues of Paris, to the grounds of Kent State University, and over here, the storming of the Diliman Commune.

In the US, as college students burned their draft cards and protested against the Vietnam war, the Weathermen fought a guerilla war, robbing and bombing banks, killing cops.

On the other side of the racial divide, the Black Panther rode forth and Eldrige Cleaver was its Messenger.

That era, too,  on the heels of the hippie ’60s—where “Make Love, Not War” was the mantra of youth under 30—saw the rise of female revolutionaries: the German Ulrike Meinhof, the most infamous of female terrorists, co-founder of the anti-Capitalist Red Army Faction, who committed suicide in prison.

From the Middle East, there was Black September’s poster girl, the lovely Leila Khaled of the Popular Front for the Liberation of Palestine. Now sitting as member of the Palestine National Council and living with her physician husband and sons in Jordan, she was involved in several spectacular Black September airline hijackings. Leila was captured in an iconic photo, as famous as that of Che Guevara, wearing a kaffiyeh and brandishing an AK-47 rifle.

Here at home, Connie Ledesma, a rich hacienda heiress, left the nunnery to fight alongside the priest, also of haciendero stock, who later became her husband, Fr. Luis Jalandoni. Both rose to the top ranks of the National Democratic Front.

Nelia Sancho, the beauty queen with the deep, limpid eyes, also went deep underground to fight with the NPA. And today’s environmentalist Gina Lopez was “lost” to her family for years, her father, Geny Lopez, ABS-CBN’s “Kapitan,” looking for her, seeking ways and means to return her to the warm embrace of family. Gina, barefooted, donned saffron robes and joined the Ananda Marga, working with the poorest of the poor in the remote reaches of darkest Africa.

Against this backdrop, the other Maita emerged: the activist, the revolutionary, the NPA amazon, the political prisoner.

But then, not very many people knew the core of the real Maita. The cool, remote beauty was a passionate human being, an intense individual who felt deep love for her country.

Maita did what most girls of her class did. She “married well” and had a beautiful daughter, actress-for-a-time Melissa Perez Rubio, who was once Richard Gomez’s flame.  Maita stepped away from the spotlight, the fashion ramp, the party nightlife and all the “frou frou” stuff of high society. She went back to school. She gunned for a master’s degree at UP, then the bedrock of student activism.

Recalls director Behn Cervantes: “I wrote an article that must have attracted her to the Movement to serve the people.” The Movement was the Kilusan, “which was part Joma (Sison) but more broad-based.”

When Maita fled to the hills, bringing along little Melissa, the whispers of her life underground became urban lore. The husband she left behind, Carlos (Cookie) Perez Rubio, was said to have posted missing ads in newspapers, in search of Melissa. Then Maita was eventually caught and thrown into a military jail.

But a young army officer, in a reverse Stockholm Syndrome, fell in love with her, sprung her out of military prison, and fled with her back to the mountains.

That army officer fought with the NPA and was subsequently killed by government soldiers.  Maita allegedly took up with an NPA commander and then met folk activist Heber Bartolome. “Tibak din yan,” says Behn of Heber.

“She was in the hills with Heber and they had sons,” says Behn. “We used to call her ‘The Other Gomez’ as opposed to actress Rita Gomez, who had many men in her life. So did Maita.”

“After she left Heber, Maita surfaced,  to resume a normal life,” adds Behn.

Maita used to visit Behn frequently in his house, bringing along one of her sons, a naughty boy “who would pick up things around the house and drop them.” Behn would tell the boy, “Papaluin kita.”  And he would have that hurt, sad look. But Behn would stand his ground. “He behaved after that.”

Behn, as he talks about Maita, feels bereft at her untimely death. “I feel miserable. I have lost a good, dear friend.”

Rodne Galicha is Site-of-Struggle officer at the Alyansa Tigil Mina, an alliance fighting for transparency in the mining industry. He talks about Maita on his cell phone while sailing an outrigger boat from Jomalig island to Infanta, Quezon, a long five-hour trip by sea.

“I call her the Queen of the Toiling Masses,” he says. “No airs, no show-biz flair.” He recalls that unforgettable time “when we both crossed the Sibuyan Sea to Tablas island in Romblon.” They were in an open speedboat with six-meter waves crashing around them and flying fishes hurtling themselves at the boat. It was dark. It was 4 a.m. and Rodney was scared.

But Maita was unfazed. “Oh, the boat ride is just an ordinary thing,” she said. “You know, if you have to do something for the people, you just have to do it.”

They went to Sibuyan and Tablas islands to learn more about mining, “the value chain of the industry. Like, for example, how mining licenses are awarded.”

Having been an economist and coordinator of Bantay Kita, a group of reform-minded economists, Maita pushed for openness in the industry—“for government and mining companies to reveal their practices, their policies, the negotiations, as well as finances of the extractive industry, in general.”

Maita, adds Rodney, taught Economics at UP. “This was her world. She also worked with Action for Economic Reform (AER).”

The reform-minded economist that was Maita became, gradually, a fighter for the environment.

“This was the last advocacy in her life,” says Rodney. But with mining, Maita “clarified the whole economic life of the Philippine mining industry” and traveled the country extensively to see for herself the effects of the industry on local communities.

“She continued her militancy even when she had to use a cane,” says Rodney. There was a time in Davao when she was quite sick. “She borrowed my coat and walked with a cane.”  Her last text to Rodney was to greet him on his birthday last June 2.

Maita retired from Bantay Kita and from the AER. She had a red house constructed on a half-hectare island on a lake atop a mountain in Caliraya. It was her rest house and Rodney occasionally visited, helping her put up windows and glass panels.

And what luxury did she crave? “Maita loved good coffee. Everywhere she went, she brought her little espresso machine.”

And she loved a good, long smoke, cigaret in hand, talking about life, listening to Rodney’s problems.

“Maita, I thank you for making me a part of your life,” says Rodney.

“Absolutely no fear. You know, when you are into anti-mining, you can get killed. Look at journalist Gerry Ortega of Palawan…

“That Maita—she had depth and substance… But tell me—to love your country, you have to go underground?”

Maita did. She wanted to change the world—change things as it were, as they are—from the ground up. She left her privileged world and lived the life of a warrior for the little people who have no voice.  And so, salute, Maita! A life well-lived and work well done!