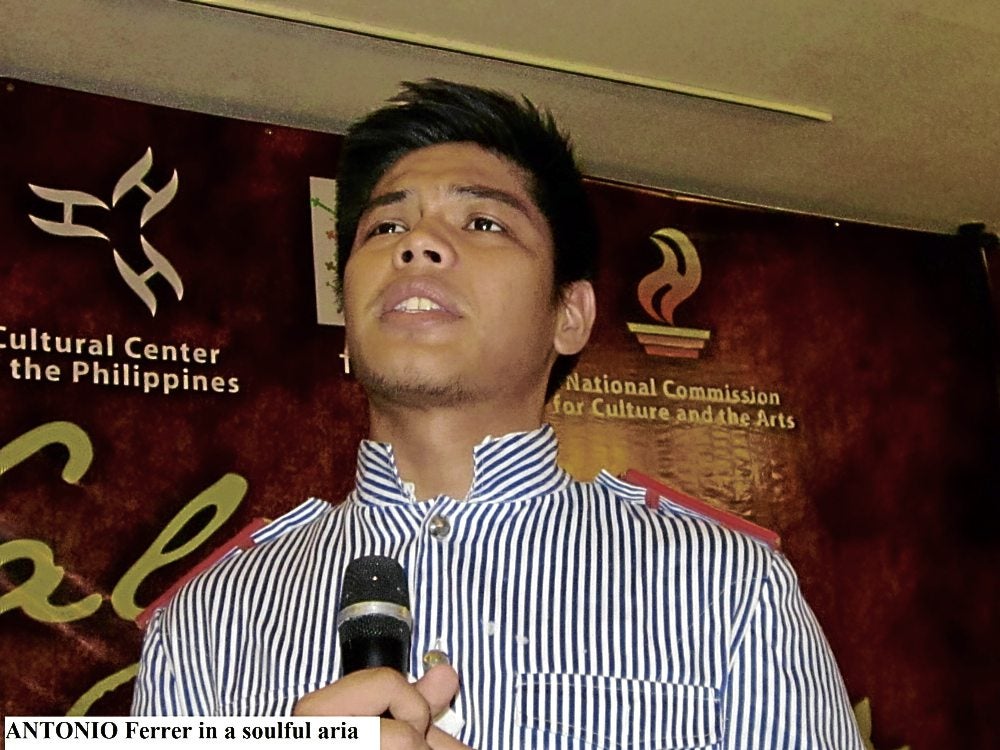 ANTONIO Ferrer in a soulful aria

‘Walang Sugat’ in the 21st century: Darker this time?

It has been produced many times since its triumphant premiere in—gasp!—1902, when there were still pockets of resistance against the American imperialists, even though US President Theodore Roosevelt had declared the Philippine-American War officially over.

“Walang Sugat” has also been made into a film and is just begging to be transformed into grand opera. (On second thought, there may be no need for this for the original production—with embellishments here and there—will do nicely.)

Filled with melodic arias, duets romantic as well as comic, and throbbing music, the zarzuela tells the story of Temyong and Julia, whose love for each other is rudely interrupted by war when Temyong joins the revolution against Spain.

“Walang Sugat” was last staged by Tanghalang Ateneo in 2010 with the young tenor Antonio (Arman) Ferrer, a Voice student of the UP College of Music, outstanding as Temyong. He reprises this role (alternating with Noel Rayos) in the latest incarnation of the zarzuela, to be staged by Tanghalang Pilipino Aug. 9-26 at Tanghalang Aurelio V. Tolentino, Cultural Center of the Philippines.

This was announced by Nanding Josef, Tanghalang Pilipino’s artistic director, during a recent press conference at the National Commission for Culture and the Arts (NCCA) in Intramuros, Manila.

Ferrer, Villonco and Rayos sang songs which had become a staple on the concert stage. Red Nuestro and Jennifer Villegas performed a rib-tickling  comic duet.

Not always a happy ending

Elucidating on how he attacked the material, Siguion-Reyna noted that the musical play was set during or near a period of transition for the country, with “the exchange of power” between Spain and America.

So he delved into “the idea of freedom which our forefathers fought for. I tried to explore this, for the fight for freedom does not always have a happy-happy ending.”

The director noted that the characters were not just revolutionaries but included collaborators and occupying powers.

He went “a little into the darker side of the material. There are deceptions of power kahit saan [anywhere]. This is very contemporary. There are recognized fabrications people do to one another.”

So Siguion-Reyna explored the “darker side” of the work, but hastened to add: “Of course, I’m still sticking to the zarzuela tradition.”

Another piece of good news Josef announced during the press con was that acclaimed soprano Noemi Manikan-Gomez, after a long period of self-induced retirement, would return to the musical stage to play Julia’s mother. Manikan-Gomez is also the cover girl of the coffee-table book (which Josef held up for all to see) about Tanghalang Pilipino’s 25th anniversary, which will be launched along with “Walang Sugat” in August.