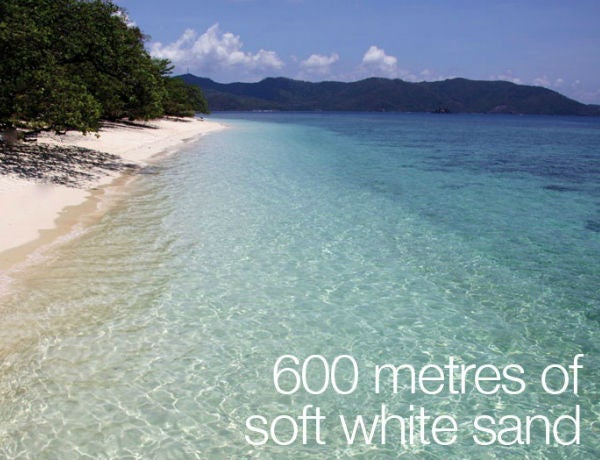 BEST HOLIDAY DESTINATION Ariara island boasts of 600 meters of soft, white sand, one of the reasons it topped the British edition of Vogue Magazine’s 100 best holiday destinations in the world. PHOTO FROM WWW.ARIARAISLAND.COM

Palawan island No. 1 getaway spot in the world

The fun in the Philippines is definitely starting to pick up with a private getaway island in Palawan province taking the top spot in the British edition of Vogue Magazine’s 100 best holiday destinations in the world.

The Department of Tourism (DOT) on Monday announced that the magazine, which named Ariara Island—a 103-hectare “private paradise” snuggled among the untouched Calamian Islands—as the world’s No. 1 getaway spot, will hit the stands in August.

“What is remarkable is that the entire resort is a testament to the unique artistry and skills of Filipino designers and artisans,” Jimenez said.

“The use of local materials and traditional techniques serves as good advertising for Filipino craftsmanship and world-class products,” he added.

“Tourism is not just about counting tourist arrivals … more importantly, it is about building opportunities on the ground and improving lives, in communities, in very real places.”

The resort is owned by British property developer Charles McCulloch and his wife, Carrie.

The United Kingdom remains to be one of the Philippines’ biggest tourism markets, registering over 104,400 tourist arrivals last year, which the DOT noted was a record.

Every piece of furniture that adorns these structures was handcrafted and upholstered by local carpenters. Some had also been  outsourced to Filipino artisans.

The tropical island resort has been described as “the ultimate off-the-beaten-track destination,” which offers guests—a group of up to 18 people—an all-inclusive package of exclusivity, relaxation, 24-hour service, excellent cuisine and a wide array of amenities.

For $295 (P12,000) a night per person, guests can relax in its posh villas and cottages and enjoy an unbroken view of the neighboring islands and the clear blue waters of Palawan.

Guests will be made to feel like royalty even in the bedroom, which is adorned with a private terrace and a garden, hanging chairs and hammocks, a four-poster bed, a walk-in closet, a large bathroom and an open-air shower.

Out in the sea, they can enjoy jet-skiing, windsurfing, canoeing, snorkeling or scuba diving to discover Calamian Islands’ rich diversity of marine life.

Lucky visitors may even spot some of the world’s endangered species of sea turtles such as Hawksbill, leatherback, Olive Ridley and green turtles crawling along Ariara’s main beach to lay  eggs.

Guests who are avid bird watchers may turn to the island’s unspoiled forest for relaxation. It is home to eagles, owls, kingfishers, woodpeckers, egrets and flower peckers, among other bird species.

“We want to see more of this type of investment which supports the principles of responsible, ethical and sustainable tourism,” he added.

From January to May this year alone, British tourist arrivals continued to grow, yielding 50,347 arrivals. This was “one notch higher” from its previous 10th place, according to the DOT.

It also said that British tourist arrivals were expected to improve with the ongoing promotional efforts in the United Kingdom via London cabs, double-decker buses and posters mounted in strategic places in time for the Queen’s recent diamond jubilee and the 2012 Olympics.