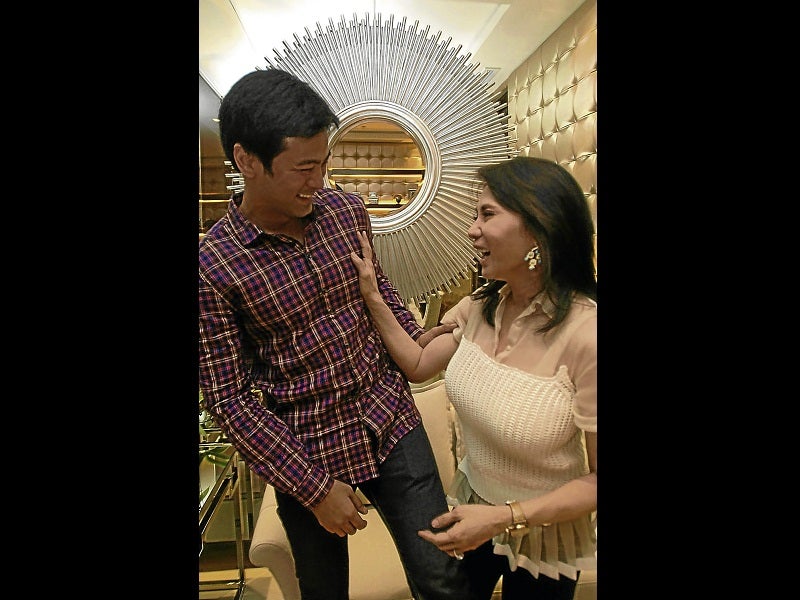 How Hayden proposed to Vicki No final date yet, but should Vicki Belo and Hayden Kho Jr. finally walk down the aisle sometime next year, it would be in the US. The future bride plans to wear a dress by Los Angeles-based Filipino designer Monique Lhuillier.

“I prefer wearing a short dress instead of a long one,” said Vicki. “We’ll see. But definitely it won’t be white. The role of the blushing bride doesn’t suit me anymore.”

Vicki, 54, is also steeling herself at the possibility that Quark and Cristalle Henares, her two adult children with former husband Atom Henares, might shun the affair. She also confessed a desire to settle down with Hayden for good and “make things right” in accordance with her traditional Catholic upbringing.

After making show-biz headlines by recently going public about their engagement, the controversial lovers are slowly settling back to their respective routines. They recently granted Inquirer Lifestyle an exclusive interview on their immediate plans and concerns, including a series of amusing back-stories that would probably melt the heart of even the most impervious cynic.

When Hayden, 30, mustered enough courage to finally pop the question last December, for instance, he had originally set his sights on doing it in Morocco. After seeing Vicki for almost six years, Hayden knew that his girlfriend “has this thing” for proposals.

“I saw the movie ‘Casablanca,’ and was so inspired by it,” he said. “I even memorized the lines of the song ‘As Time Goes By.’ I wanted the occasion to be as unique and as memorable as possible.”

Except for close friends-cum-collaborators such as publicist Joji Dingcong, broadcaster Korina Sanchez and fashion designer Pepito Albert, Hayden kept his plans to himself. Since he wanted to do it on a whim, not even Vicki knew that he planned to take her to Morocco. But in his haste, he forgot to keep Eliz Estrada, Vicki’s former PR assistant, in the loop. Big mistake.

Since Eliz is in charge of Vicki’s engagements abroad, she booked the doctor to give a talk in Houston on the same week Hayden was to propose in Casablanca.

“I told him a week before that I’m going to Houston to give a talk,” said Vicki. “He wanted me to postpone it for another week. Of course, I couldn’t. A talk is a talk. I told him he could stay in Manila if he had something important to do. But he said he’d still fly with me to Houston.”

Apart from being unable to disclose his reasons to Vicki, Hayden couldn’t chide Eliz for the major damper she unwittingly did, lest Vicki find out.

With his chance to do a Bogart foiled, Hayden immediately canceled his plans to fly with Vicki to Casablanca. He also had to tell Pepito and company that their planned trip to North Africa was off.

He had originally asked Pepito to do a gown for Vicki to wear to the special event. Instead, Hayden requested the fashion designer to focus on helping him find the right diamond for the engagement ring. He found one, a huge princess-cut diamond, which Hayden took to jewelers at Panlilio to have it set on a diamond-studded band.

“I hadn’t the slightest idea what he was up to,” said Vicki. “But I could sense that he was up to something, and he didn’t want to tell me. His brows were always furrowed while surfing the Internet for hours.”

Who wouldn’t be? With barely a week to go, Hayden had to start all over again. Since he had neither friends nor an advance party in Houston, he had to do everything himself by remote control.

And just when he had almost finalized plans with a helpful concierge from one of the city’s five-star hotels where they were supposed to stay in, Eliz came up with another surprise. Houston, we have a problem.

Three hours before he and Vicki were to fly to LA, Eliz told them that they would be staying at a different hotel in Houston.  That meant Hayden would have to develop new contacts since they wouldn’t be staying anymore in the hotel they were originally booked at, the one with the friendly concierge. 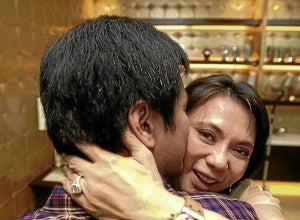 “I was working almost non-stop writing e-mails and checking websites up to the time we boarded a plane in Manila,” said Hayden.

Eliz had rebooked them at the Marriott Houston, where Hayden, to his dismay, had to deal with an “unresponsive” concierge. It was a good thing he had a three-day reprieve in LA, where he and Vicki shook off their jet lag before finally flying to Houston.

“I wanted our hotel room to be filled sana with roses and oozing with the scent of perfume when we return after my proposal,” he said. “But the concierge at the hotel we were supposed to stay in was unhelpful.”

While they were in LA, Vicki remained clueless about Hayden’s odd behavior. Since she didn’t want to pry, she kept her observations to herself.

“He was glued to the computer almost the whole time we were there,” she said. “We barely talked. I was beginning to think he had a new girlfriend on the Internet.”

Before flying to Houston, Hayden had enough sense to finally disclose to Eliz his plans. Houston, it turned out, wasn’t a bad second choice after all. Since it was a few weeks before Christmas, the weather was nippy and all the lights at night were aglow.

Instead of an old fort in Casablanca, Hayden found himself proposing to Vicki at the Houston Aquarium’s restaurant. Its main attraction, apart from the food, is a series of giant, wall-to-wall aquariums filled with various marine life.

“A day after my talk, he insisted that we go to the Houston Zoo and Aquarium since he wanted to see the white Bengal tigers,” said Vicki. “I thought they were already extinct. I thought it was a good idea because those animals are really beautiful.”

Dressed in jeans and casual tops, the two then went to the restaurant for a late lunch. As their friends started to arrive, a female scuba diver carrying several placards dove and, as soon as she reached the bottom of the aquarium, showed a sign welcoming everyone. When the diver got everyone’s attention, she showed another sign that ultimately made Vicki’s eyes widen: “Hayden loves Vicki!”

“I was looking to my left where the diver was and when I switched back my attention to Hayden, he was already on bended knee. Before I knew it, the music started playing and everyone was looking at us,” said Vicki.

And what were his exact words as he showed her the ring? “I’d be happy if you would be my wife.”

Before Vicki could say another word, a second diver in the aquarium directly behind Hayden held out the last placard: “Please say yes.” And she did with gusto.

Just when Vicki thought the surprises had run out, she and Hayden stepped outside the restaurant to find a pumpkin-shaped horse-drawn carriage waiting for them. He was simply taking his cue from his lady love’s all-time favorite fairy tale: “Cinderella!”

“Actually, it was a bit hard to get into it because I wasn’t petite enough,” Vicki said with a chuckle. “But the weather was cool and the lights were lovely.”

It was almost dark and they were supposed to go to a darkened street, which would immediately turn its lights on as soon as their carriage passed by. The carriage driver, a last-minute replacement due to earlier changes, couldn’t find the place.

“I still ended up paying for it,” said Hayden. “But it’s okay as long as the rest of the arrangement made Vicki happy.” 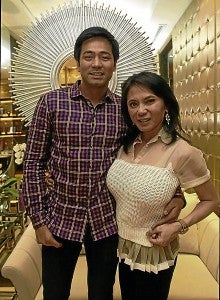 But real life is no fairy tale, and the two are aware of this. As soon as they returned to Manila, the couple, upon Hayden’s insistence, immediately consulted several lawyers to hammer out a prenuptial agreement.

The prenup Hayden has in mind would stipulate that everything Vicki made and would continue make after their union would be hers and hers alone. Conjugal ownership would be limited to whatever Hayden earns during the marriage.

“I’m sure people would say that I’m just marrying her for the money,” he said. “I don’t want that kind of baggage.”

Then there’s this brewing issue between Vicki and her two grown children. When Quark was initially interviewed on TV recently about his reactions to the engagement, he reportedly said that he wouldn’t think twice of killing Hayden if he so much as hurt his mom again.

Quark later toned down the rhetoric and apologized in public to his mother, but Vicki totally understood where her son was coming from. Quark and Hayden aren’t exactly the best of friends, but Vicki insisted that they get along quite well.

“The three of us even went to Pacquiao’s most recent fight together, and Quark told me that he really likes Hayden,” said Vicki.

But the same rapprochement doesn’t exist between Hayden and Cristalle. We heard from sources before that the two aren’t even on speaking terms. Vicki seemed resigned to her daughter’s indifference toward her future husband.

“I told her a long time ago that Hayden and I are happy,” she said. “He makes me very happy. Happier than I’ve ever been in my whole life.”

Cristalle’s position hardened all the more when Hayden’s sex videos with other women became public almost two years ago.

“I would have probably felt the same had someone done that to my daughter,” said Vicki. “How can you even begin to trust again someone? But I know Hayden. He’s really a good person. He got somehow waylaid when he dabbled into show biz. He got overwhelmed by the strange system.”

Vicki partly blames herself for being instrumental in paving the way for Hayden to try show biz just to boost his fragile self-esteem.

“Hayden is very shy in public,” she said. “He may be young, but he was already an achiever. He wasn’t just some boy toy. All that seemed to have become irrelevant when he began dating me. I thought encouraging him to do show biz would balance the situation out. I was wrong.”

As for Nena Belo, Vicki’s mother, she voiced her opinion rather differently. It didn’t escape her notice that Vicki doesn’t go to Mass regularly anymore. And when she does, she skips communion.

“How can naman I when the entire world knows about us,” Vicki said. “Everyone says my thinking is so old. God will understand. But my religious upbringing and all those years in Assumption and UST tell me that what I’m doing is still wrong. I’d like to make things right this time so I’d feel lighter.”