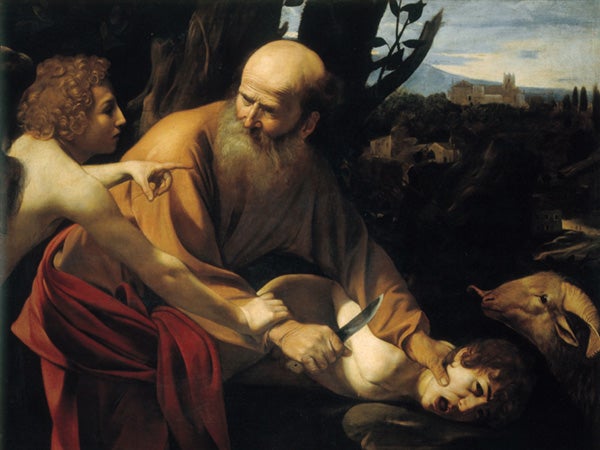 CARAVAGGIO’S “The Sacrifice of Isaac,” c. 1603-1604. Oil on canvas. Works by famed Italian artist Michelangelo Merisi da Caravaggio, Rembrandt and other masters will give way to 20th century paintings by Magritte, Rothko and others in Germany’s world-renowned Gemaeldegalerie. AP/Kimbell Art Museum

Berlin moves to calm row over home for Old Masters

BERLIN—A bitter spat over one of Berlin’s best-loved art collections, a clutch of invaluable Old Master paintings, came to a head this week with the German government vowing to find a compromise.

Culture Minister Bernd Neumann said he would help forge a consensus in the row over plans to move the masterpieces currently housed at the world-renowned Gemaeldegalerie to the German capital’s Unesco-listed Museum Island.

“The public reaction to these plans has been heated,” Neumann said in a statement.

“The federal government agrees with the museum foundation president and the city-state of Berlin that no hasty decisions should be taken but rather that alternatives should be reviewed… so a viable solution can be found.”

The works by the likes of Rembrandt, Caravaggio, Duerer and Cranach are to make way for a private collection of 20th century painters such as Rothko, Magritte and Ernst valued at 150 million euros ($185 million).

Neumann’s ministry has earmarked 10 million euros ($12 million) to transform the Gemaeldegalerie into a modern art museum.

Many of the Old Master paintings would be displayed at the Bode Museum across town on Museum Island, but space limitations would force others to be kept in moving crates for years until a new annex is ready there.

Opponents of the move have collected more than 16,000 signatures for two petitions calling for the plan to be dropped. Influential news weekly Die Zeit ran the headline “Save the Gemaeldegalerie!”

“The disappearance into storage of whatever paintings cannot be displayed in the Bode Museum— which we call on you to disclose— is not acceptable, even for only six years,” wrote Harvard art professor Jeffrey Hamburger, author of one of the petitions.

“We believe that the Old Master collection should be moved to make way for the Pietzsch (modern art) collection only after space on (Museum Island) has been found to accommodate it—hardly a rash proposal.”

The Association of German Art Historians said in its petition to Neumann that the plans would deprive art lovers from around the world of the chance to see an exquisite part of Europe’s cultural heritage for years to come.

“We consider these plans irresponsible since they rob one of the world’s finest and, despite its wartime losses, most comprehensive collections of Old Master paintings of its unique capacity, namely to present more than 500 years of European painting history in encyclopaedic scope,” it said.

Neumann said he expected new proposals to be hammered out at a meeting of the Prussian Cultural Heritage Foundation, which runs Berlin’s state museums, later this year.

“The goal was never to push the Old Masters out of the Gemaeldegalerie but rather, to the contrary, to create a more appropriate and attractive place for them.”

Cash-strapped Berlin, which lacks an industrial base, has come to rely heavily on culture as an economic lifeline and its world-class museums have helped fuel a tourism boom.

A study released this week showed that the number of visitors to Berlin museums rose by six million or nearly 73 percent between 2002 and 2010, versus just eight percent across Germany.