Who’s dressing up whom for the Sona? | Lifestyle.INQ ❮ ❯ 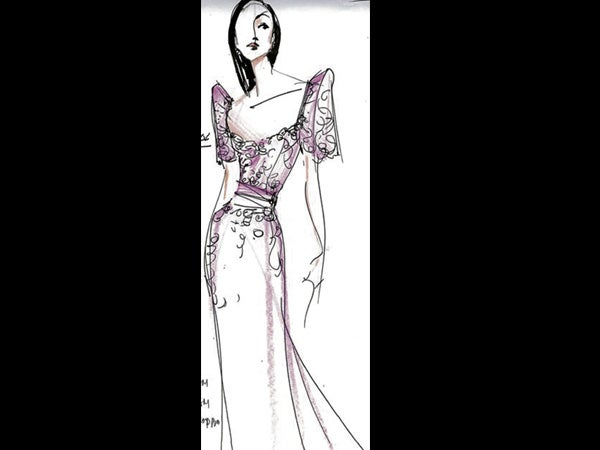 Who’s dressing up whom for the Sona?

Even the biggest names in local fashion speak with apprehension when asked who they’re dressing for the annual State of the Nation Address (Sona) on Monday, July 23.

It’s almost like in the Oscars, when fashion houses and the stars’ stylists find out, along with the rest of the world, who the celebrities will end up wearing only when  they stride down the red carpet.

For instance, Randy Ortiz, go-to designer of the likes of Ormoc Rep. Lucy Torres-Gomez and Kris Aquino, made two dresses for each for Monday’s Sona, the one political event that’s increasingly becoming a much-anticipated fashion spectacle.

For the TV host and President’s sister, Ortiz made one yellow dress and one teal dress. The yellow dress is an off-shoulder modernized kimona with no sleeves, but with a panuelo wrap attached to the bodice. It sports new embroidery and appliqués inspired by kalabasa leaves.

“I’m not sure if she will end up wearing either one, though,” Ortiz says. “You know Kris, she might have other options.”

Ortiz is more confident that Torres-Gomez will wear one of his dresses. One’s an apricot full calado dress with  piña overlay. There are no floral details on the terno this time (rosette is a Randy Ortiz trademark). Instead, it’s embellished with gold bullion embroidery.

Ortiz also made clothes for two of Vice President Jejomar Binay’s daughters—a powder-blue piña gown with  modern tapis for Anne Binay-Alcantara, and a T’nalak corseted terno for  Nancy Binay-Angeles. The designer, who traces his roots to South Cotabato, is pushing for the T’nalak fabric of the south.

The other Binay sister, Makati Rep. Abby Binay-Campos, turned to Ivarluski Aseron for her Sona frock. Aseron made a lace terno for the young congresswoman, with matching dress for her toddler daughter.

Jojie Lloren will dress up two of his loyal clients, Liza Araneta Marcos and Jip Remulla.

Remulla, wife of Cavite Rep. Crispin Remulla, will wear a terno with multiple seam lines in shades of black, turquoise and lavender made of silk dupioni. Sen. Ferdinand Marcos Jr.’s wife Liza will don a red and black terno. JC Buendia, the designer who has made clothes for President Aquino and then-President Macapagal-Arroyo, is dressing up a congressman’s wife.

New designer Maureen Disini gets to send her first Sona dress on the Batasan red carpet this year as she dresses up a public administrator from Marinduque and one of P-Noy’s assistants.

Kaye Tiñga, wife of Taguig Second District Rep. Freddie Tiñga and another red-carpet favorite, will wear Pepito Albert. She has no idea what the dress will look like.

“Pepito says it will be a contemporary terno. I don’t really know,” Tiñga says with a laugh. “He surprises me. We’ve done this before; he has made me a dress for the Sona four days before the event. Our tastes are so similar so I trust him.” Albert has been her go-to designer for 15 years.

Sen. Loren Legarda is torn among several choices: her lola’s antique terno, a gown by Paul Cabral made of recycled antique piña, a Tingguian costume and a T’Boli outfit.

“What do you think?” the senator asked this writer via SMS. An advocate of local weaves and fabrics, Legarda says she has worn at least two of those dresses during the Arroyo administration, and she describes them as “beautiful.”

Like the rest of the country, we won’t find out the usually well-dressed senator’s final choice until Monday.

But in case Ortiz is still wondering, yes, Kris Aquino will wear one of his dresses come Monday.

“What I asked Randy to make, that’s it,” Aquino texted from Bangkok, where she’s doing a shoot. “I just asked him to use Pinoy weave.”