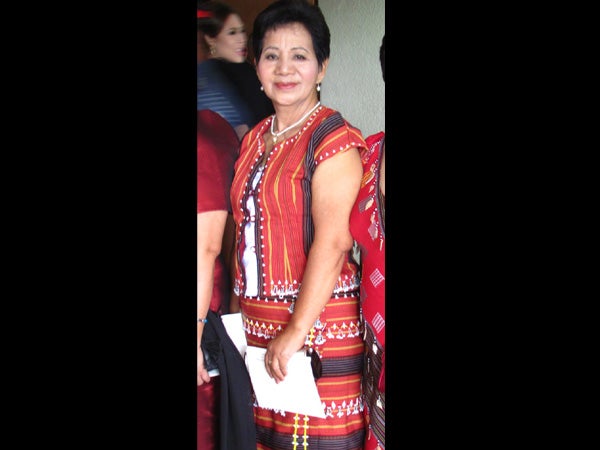 “No frills, no glitter. A simple straightforward design lifted from the peasant Filipiniana that does not detach itself from the frugal and humble lifestyle of the majority of Filipino women in Luzon, Visayas, and Mindanao. Our call for women’s access to healthcare is in Tagalog, the fabric came from Iloilo and it was cut, designed, and sewn in Davao,” Rep. Luz Ilagan, said in describing her gown.

She added the “alampay” and “tapis,” which accentuated the gown, “revealed the Filipino women’s call for women’s access to healthcare.”

Rep. Emmi De Jesus, also from the Gabriela partylist, on the other hand, wore a Ruela Rivera gown which she described as “an organza skirt overlay painted with the face of a woman, with health icon pinned on her hair tresses and a hand stop sign on the acronyms CCT and PPP. Ruela Rivera is a fashion designer from Marikina.

Both De Jesus and Ilagan denounced Aquino’s Public Private Partnership and Conditional Cash Transfer programs, saying the privatization of government hospitals, coupled with the phasing out of charity wards and implementation of “deceptive scheme” of distributing PhilHealth cards further burdened the Filipino women and their families by depriving them of healthcare.

“There is no LABKA in Aquino’s profit-oriented healthcare agenda,” said Ilagan.

“Who stands to benefit from Aquino’s PPP? It is the big businesses and multinationals who will gain billions in profits as the Aquino government, in transforming health services into profitable businesses, assures the exponential return of their investments,” Ilagan said.

Ilagan noted that health of women and children had gone from bad to worse, with maternal rates increasing to 221 deaths for every 100,000 live births.

“It is only just that we bring to Congress women’s call to stop privatization of all basic social services,” De Jesus said.