The end starts in silence, dreadful and dire.

It is the moment after the elf Dobby’s burial, and for a brief period Harry Potter, Hermione Granger and Ronald Weasley rest in the seaside house that Ronald’s brother Bill and his new bride Fleur Delacour call home.

They use it mostly as a safehouse these days, Bill shares, and for a while the trio of renegades may be able to get some peace and much-needed rest.

The usurper, Voldemort, claimant to the title of Greatest Wizard, believes that his possession of the wand already declared forfeit the life of the boy they say is greater for having survived the same curse that threw the evil warlock into a near-death state.

From each perspective, the end also starts in purpose.

Voldemort’s Death Eaters have taken over Hogwarts School of Witchcraft and Wizardry, for the likelihood that Harry will again return to the safety of its enclaves, the protection of its walls, if not to attempt the aid and rescue of his followers, believers that Harry Potter will prevail over all this chaos.

More than that, the entire wizarding community is urged to give the boy up, so that they may live.

Meanwhile, the hunt for Horcruxes, magical items bonded with bits of Voldemort’s soul, is not over. After a while Harry forces himself out of grief to confront the rest of what is to come.

What is to come includes a plan to break into Gringotts Bank, impregnable but with the help of Griphook, a bank goblin they saved from torture, or death. Never mind the terror. Never mind treachery. Never mind safety. The search must go on.

Purpose, for one, is welded to pride—to banish a gnawing insecurity, to prove that no creature, man or insect, is equal to and, much less, above him. For another, it is welded to his fate, a life that for all of his 17 years involved so little, if any, choice, just a deadly path carved for him even before his first spell.

But this is the end, and these purposes cannot but meet. They have been on a collision course for quite some time. 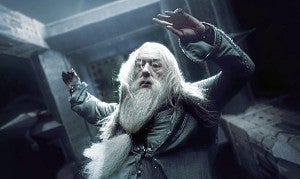 And what a meeting it is, enveloped by all sorts of terrible things.

The darkness grows. The entire wizarding world has been taken over by Death Eaters, or, simply, fear of them. Harry is Undesirable No. 1, and all known allies are under heavy watch or baseless torture.

After the fiasco at the bank, Harry’s mere presence in Hogsmeade sets off magical alarms, suggesting to us hapless witnesses that The Boy Who Lived has been all but cornered. He has nowhere really safe to go.

Fatalities pile up. The collateral damage to this dance of death between Harry and Lord Voldemort is expectedly high. Characters we love die, with some holding out hands to each other even at the closing of their eyes.

But what a glorious meeting it is, too, for the show of will and power from those personalities author J.K. Rowling once cleverly made us dismiss in derision.

We need but mention their names. In acknowledgment. In thanks. In awe.

McGonagall, the elegant but seemingly frail head of Gryffindor House. Flitwick, the diminutive master of charms. Sprout, whose head of hair resembles the bushes she teaches the care of. Slughorn, the blabbering propounder of potions.

Dumbledore’s greatness overshadowed any and maybe even all of them, but without him, oh, how they shine.

The Weasley family, for all the mockery flung their way, makes very valuable life-and-death contributions. Aberforth Dumbledore, who proves he has more than the blue in his brother’s eyes. Neville Longbottom, once a magnet of ridicule, becomes a potent combination of the blood and bravery of his Auror parents.

And, arguably, even the Death Eaters Lucius and Cissy Malfoy, and most especially, the hateful Severus Snape. 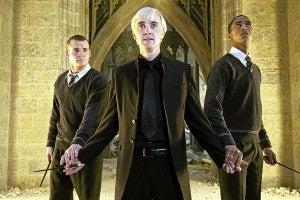 They once again prompt us that what is seen is negligible. They once again remind us impressively that there are higher, nobler and gentler forces in the hearts of men, unturned and unbreakable even by the greatest evil.

To say that the end is remarkable would be an understatement.

So we forgive all the filmmakers and screenplay writers, and even the makeup artists who could not pull off proper aging techniques in a movie where it really mattered.

Because, after a decade, we did not see films, and we do not even now recognize all these British acting royalty. We saw persons whose names we know by heart, whose eccentricities make our lips twitch into smiles, whose amazing faculties we will tell stories of to our children.

We have forgotten the lines between writ fiction and reality. We did not read about characters. We heard of them, talked about them, wondered what they like, gossiped on who they love.

We have forgotten that we should now be forgetting about Harry Potter and his lightning scar because his story has ended, the books are closed, the films done.

And years from now, we will still be talking about how it has been a privilege to be of the generation that knew the boy wizard, and saw him live.