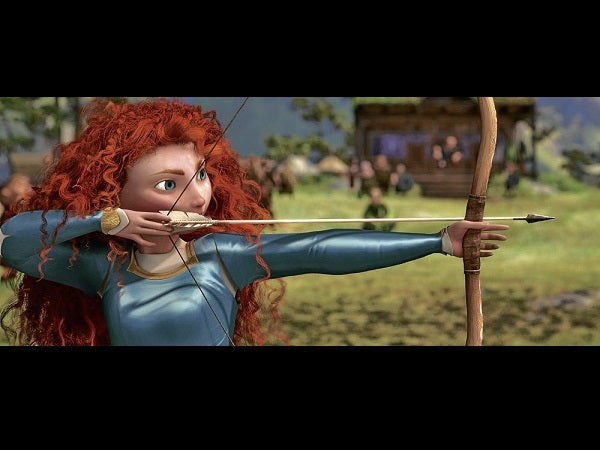 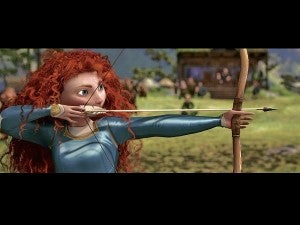 From its sweeping, breath-taking opening, it is abundantly clear that “Brave,” the newest animated film from Disney and Pixar, is exemplified by the awe-inspiring hair of the movie’s heroine, Merida. Her wild, blood-red hair is simply alive with detail and movement; your eye follows every strand as they sway with action. It does that thanks to newly developed tech by Pixar, of course, and it’s worlds away from the impressive job they did with Sully’s hair in “Monsters, Inc.”

Just like her hair, Merida (voiced by Scottish actress Kelly McDonald) is fiery and independent. The only daughter to the Scottish King Fergus (Scottish comedian Billy Connolly), she is a wild child, savoring in riding her horse and shooting down targets with her deadeye archery skills. But when she reaches her teenage years she discovers that she is fated to be wed to a prince of one of the three clans to keep the peace in the land. When she refuses to do so, she comes into conflict with her loving but stern mother Queen Elinor (British actress Emma Thompson). After running away into the deep forest, she meets a witch (Julie Walters, yes, Mrs. Weasley) and strikes a magical bargain that ultimately triggers a terrible curse. Now, Merida is the only one who can do anything about it.

Set in the ancient highlands of Scotland, “Brave” is overflowing with detail as the beautiful landscape is reproduced with obsessive care. The character designs are top-notch, with the production team taking the time to make correct historical details here and there. It’s true: the characters just move with a fluidity and a solidity that’s never been seen before even in previous Pixar movies. It’s a delight to just sit back and watch them move. 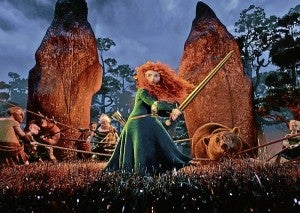 Directors Mark Andrews and Brenda Chapman tell a deceptively simple story that draws on both Merida’s coming-of-age story as well as legendary Scottish traditions, all told with heartfelt flourish and the cutting-edge technology. But the other things that delight are more audible in nature. The voice actors are distinctive and speak in authentic and adorable accents. In particular, it is McDonald, best known for her role as Helena Ravenclaw in “Harry Potter and the Deathly Hallows Part 2” as well as a startling turn in “Trainspotting,” who beguiles the viewer with a proud and fun-filled performance. Her Scottish brogue is like a sweet confection you just want to keep chewing. Also providing voices are Kevin McKidd, Robbie Coltrane and Craig Ferguson. The other audible gift that’s worth praising is the nimble and occasionally epic score from Scotsman Patrick Doyle. It seriously adds an uplifting and exuberant feel to the film. The songs, bristling with native Scottish instruments and performers such as Julie Fowlis and Birdy, are gorgeous.

Though it boasts an epic setting and a forward-propelling plot, “Brave” is a fairly conventional film by the usual Pixar standards, but it boasts a very welcome, unconventional element: Pixar’s first female protagonist, Merida. Feisty and fearless females, however, is a Disney specialty, and “Brave” is in some ways Disney’s “Mulan” with kilts. That’s a good thing, as “Brave” represents the things that both Disney (princesses and songs) and Pixar (pixels and programs) do very well. That’s why “Brave” is such satisfying and inspiring entertainment as it mixes the best of the storied past and the bright future by telling us a simple story brought to magical life with top-notch tech as well as legendary swagger and song.