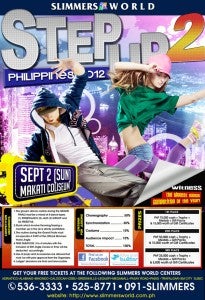 MANILA, Philippines – The ultimate institution in Slimming, Health, Fitness and Beauty once again raises the bar in the inter-collegiate group dance clash with its own STEP UP PHILIPPINES 2012, the country’s biggest and hippest dance competition today. Slimmers World International invites everyone to witness the biggest spectacle in the dance arena at the Makati Coliseum on September 2, 2012, Sunday, 5 p.m.

After a careful selection among 78 dance groups who have undergone thorough screening, 30 finalists representing different universities/colleges/schools nationwide have been chosen to make their way in stepping up to the most-awaited dance battle of the year.

The participating groups comprising of a minimum of 10 members to a maximum of 16 members, mix of enrolled male and female students, will be assigned to a Slimmers World center, carrying and battling it out to the grand finals. Groups vying for the title of STEP UP PHILIPPINES YEAR 2 GRAND CHAMPION will be judged according to Choreography (50%), Synchronization (30%), Costume (10%) and Audience Impact (10%). The competition will also test each group’s creative strategy in mixing the Slimmers World Jingle on their music piece and incorporating the street dance, jazz, hip hop, and free style dance moves in their routine.

Everyone is invited to see the most exciting display of coordination, grace, choreography and power as the second year of STEP UP PHILIPPINES executes its way in the history of dance battle in the country. Such a lifetime experience shouldn’t be missed! Get up! And time to Step up! For free tickets, call the Slimmers World Hotlines: 536-3333 / 525-8771 / 091-SLIMMERS.