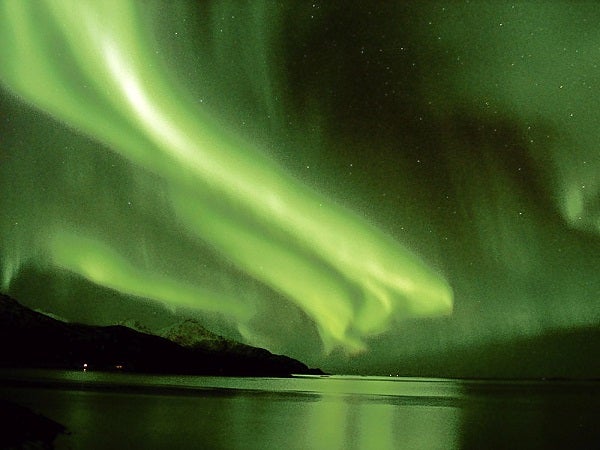 How Teng Roma chased the northern lights in Norway

With wanderlust in his blood, businessman-hairdresser Vicente “Teng” Roma travels literally to the  ends of the earth, especially when he marks a milestone.

On turning 60 last 2010, he and his son Robert took a five-week European tour, highlighted by an expedition to see the northern lights in Tromso, Norway.

“Even if I’ve been to most of these places, it’s a new experience because I’m seeing them in a different season,” said Roma.

He likes to go where few Filipinos have ventured. “I crossed the Panama Canal, walked around the craters of Mounts Vesuvius and Etna, and visited the islands in the North Sea,” he said.

He recalled that for his 50th birthday in 2000, he went on a two-week trekking tour in Nepal.

In the fall of 2010, he decided that his next adventure would be to experience the aurora borealis or the northern lights that are normally sighted in northern Europe, Canada and Alaska. This occurs when the earth’s atmosphere comes in touch with specks from the sun; the earth’s magnetic field then sends these particles toward the North and South poles.

Arriving in Tromso, in northern Norway and the second largest urban center in the Arctic Circle, the Romas went to the tourism information center at the center of town to sign up for the northern lights tour.  The man, who manned the center, was ironically an Irishman.

When he learned that Teng and Robert were from the Philippines,  he was delighted. He felt the connection because he once had a Filipina girlfriend. Aside from informing them of  the group expedition to the northern lights, he also recommended other places of interest in Tromso.

Teng was determined to experience the aurora borealis.

From Tromso, which fringed the Artic Circle, the group was brought to the borders of Norway, Soumi in Finland and Russia. “It’s all forested. Although it was fall, it was snowing and the weather was freezing,” he recalled.

They had watched sunset cloaked in  pinks and golds. It took Teng’s tour group seven hours of transferring from one spot to another to  look for clear skies to sight the aurora borealis. While waiting for the sky to burst in luminous colors, they sat around a campfire, drank hot chocolate and whisky and munched on marshmallows.

“How can you get sleepy? You will be excited. There were other people who traveled so far to see the northern lights,” said Teng.

Finally, at around 1 a.m., drapes of light floated over the fields. Every shady cloud now had a fluorescent coating and the skies were lined with neon green beams. The visitors were amazed at the changing patterns of the aurora borealis—soaring, undulating, luminous sheaths of light suspended on a clear but dark night.

Rhythmic ripples resembled a glowing serpent in the atmosphere.

“It was difficult to catch the northern lights with a camera. You can’t shoot it with a flash but with time exposure.  Why fumble over a camera and its settings with your gloved hand? I’d rather enjoy the moment. Anyway, you can always get a postcard.”

Teng described the experience as seeing a vision, or a blur between fantasy and reality. “They dance in vibrant colors of violet, blue and green. But the northern lights last only a few minutes. Parang hangin ang nakikita mo. Then you hear a ringing sound. It’s a bit eerie. It’s like seeing an apparition,” he said.

Aside from the aurora borealis experience, Teng said,  fall in Europe was beautiful as the leaves turned into bronze and copper. His most memorable breakfasts were in Scandinavia—the smorgasbard of pickled fish such as sardines, herring and a variety of breads. “I didn’t realize I liked raw fish. Just take anchovy with lemon. Sarap!”

From Norway, they took the train to Stockholm where they stayed at the Longholmen hotel, formerly a prison.

“The place has a torture museum. You realize that insane people must have been kept in your bedroom,” he said.

One day, a lady came up to Teng and said he looked familiar. She introduced herself as Julia Lervik, a former regular client at Teng’s Emphasis salon. When he explained that he was celebrating his birthday by traveling, Julia offered to host a dinner in her residence.

“She was like a Filipina, showing hospitality to a stranger,” he said.

For dinner, she prepared his favorite salmon recipe, salad and desserts.

From Sweden, Teng and Robert went to Copenhagen, Hamburg, Lubbeck, Salzburg and Budapest in Hungary. He was curious about visiting a place that had once been part of the Iron Curtain.

Teng crossed the Széchenyi Chain Bridge, the first permanent bridge across the River Danube. He said he had walked famous bridges such as the Golden Gate in San Francisco and the Brooklyn Bridge.

While walking in the city, they came across Pampas Argentinean Steakhouse.  Teng and Robert must have been the first Filipino customers to dine there—the dishes cost 18 to 23 euros.

On the border of Hungary, a cab driver took them to comfortable accommodations  in a posh village which was far from the city center. When he brought them to their lodgings, the driver declined any payment for his fare. He even arranged another cab driver to pick them up the next day and take them to the train station. “This is where you see the goodness of people,” said Teng.

The rest of the tour covered the more traditional destinations. In Venice, Teng and Robert chanced upon restaurateur Antonio Escalante and his son at Piazza San Marco.  They went to a restaurant for pasta and pizza to celebrate Teng’s 60th year. Seeing dover sole with a 30 euros tag, the group ordered it.

Getting his bill, Teng was shocked that it amounted to 200 euros. It turned out that they didn’t read the fine print that the fish cost 30 euros per gram. “That was P6,000 for fish,” he said.

On his next adventure, Teng dreams of spending months on the South American trail which includes the Amazon jungle. “That’s after I’ve put up my other salons,” he said.