How Singapore is even greener now | Inquirer Lifestyle ❮ ❯ 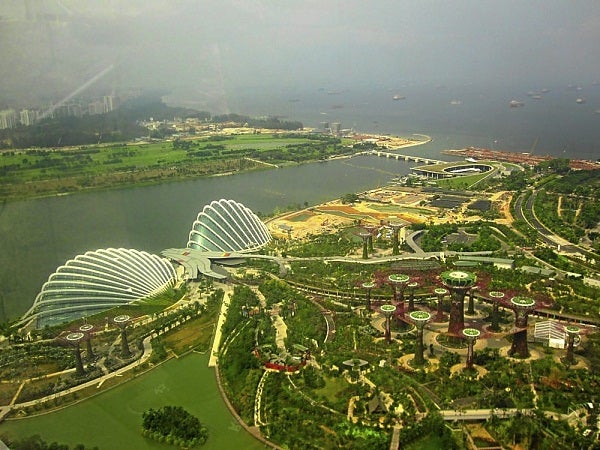 How Singapore is even greener now

From Justin Quek’s Sky on 57 restaurant atop Singapore’s Marina Bay Sands, you get a perfect view of the world terraforming below. The land is flat—gray in parts where highways and buildings have risen, brown where construction is ongoing.

There is a large outdoor stadium, its capacity reaching the thousands. A strange Louis Vuitton shop floats on the bay. Towards the right, a humongous Ferris wheel and a museum shaped like a lotus.

Singapore never runs out of things to build. If anything, they run out of land.

But that’s never a problem. They simply build some more of it.

In 2005, Prime Minister Lee Hsien Loong announced that a new garden will rise from 100 hectares of reclaimed land.

The project, Gardens by the Bay, was to encircle the city’s central business district and form an integral part in pushing the government’s mission to transform Singapore from a ‘Garden City’ into a ‘City in a Garden.’

The Gardens just opened. I could see its sprawling greenery from my perch high above. I see two amphibious-looking domes and five gigantic Supertrees: vertical hybrids of organic matter and machine.

The visuals are highly arresting, even emotional for what it represents: a physical testimony to an ultra-developed city’s pledge to go back to being green.

It’s either that, or heck, Singapore just has so much excess capital that it can very well build rainforests inside giant domes if it wanted to.

Which is exactly what it did. The team behind Gardens by the Bay built a rainforest, literally, with waterfalls, mist and tropical plant species inside a clear conservatory of sci-fi-like levels (Cloud Forest).

In another dome, they replicated the cool, dry climate of semi-arid tropical regions and filled that up with thousands of plant and tree species, from African baobabs to Mediterranean palms to olive trees from Spain (Flower Dome).

But even before one can even begin to imagine the magnitude of work that went into executing that—the trees, for instance, were shipped to Singapore from various corners of the world—I learn that the conservatories are managed using sustainable technology, which may be an even more incredible feat.

The Flower Dome is run by horticultural waste that powers a steam turbine, which generates the electricity needed in keeping the temperature at below 20°C.

The Supertrees are solar-powered.

At a certain time after the sun sets, the lights come on and the vertical gardens are bathed in light.

Whether one is stretched out under the trees or suspended high above the air on the Gardens’ Skywalks (bridges that connect the 50-m Supertrees), seeing this and knowing that wasted energy has been converted into useful energy is nothing less than magical.

At the Gardens’ opening, the Prime Minister said it was not easy having chosen to cultivate greenery instead of commerce. The garden was built on 100 ha of reclaimed land, precious land that previously did not exist.

To be more precise, land that could have easily made oodles of money on condominiums, parking lots and a couple more malls. But in a country that is known for being constantly ahead, constantly hip and constantly relevant, that would have been ordinary and altogether boring.

For the rest of the trip, I am reminded of how effortless being cool is for Singapore.

Our hotel is on Fort Canning Hill, a colonial landmark that was used by the British Command. Like most of the city’s cultural spots, it shows how impeccably Singapore can blend the old with the new. Within the hotel’s elegant balustrades and classic architectural details are thoughtfully designed interiors: An entire wall of my bathroom is disconcertingly made of glass, but my bedroom is warm and immediately comforting.

In the mornings, coffee drips delightfully from a machine.

I go wild at the Bras Basah, a four-floor complex of old books, art supplies and magazines. I sift through shelves and shelves of old Archie comics, then cross the street to the National Library, where I nearly weep upon seeing an entire basement of books, alternating rows of modern and classic authors, available to anyone, anytime, for free.

Meanwhile, a few steps away is the Toy Museum.

Meals are always exciting, and at places like Wok & Barrel, artisan brews are served alongside mod sin cuisine such as Beef Rendang Pizza. Though more traditional fare is still available in hawker stalls, there is concern that such beloved haunts may soon become out of sync with the rest of the city.

And like Singapore’s old and traditional villages, the simple way of life that just could not adapt inevitably get buried beneath the next big wave of construction rubble.

At the Sands, I am with Dino, a newfound Singaporean buddy. “In here, anything can change,” he says, gesturing towards a small figure that I vaguely recognize. It is the Merlion. “That guy is no longer our national icon. He’s been retired. We are standing on top of the new one.”

I let this sink in, thinking about the Merlion shirts I’d bought only seven years ago, and wonder how the Merlion feels about this.

“Twenty minutes, 30 minutes… the city is always changing,” Dino continues. “In Singapore, nothing ever stays the same for too long. That is the way of the city.”

I look at the crisscrossing swatches of land below me. Perhaps if I stare hard enough, I may just see the green begin to overtake the concrete.