After the deluge, now what? | Inquirer Lifestyle ❮ ❯ 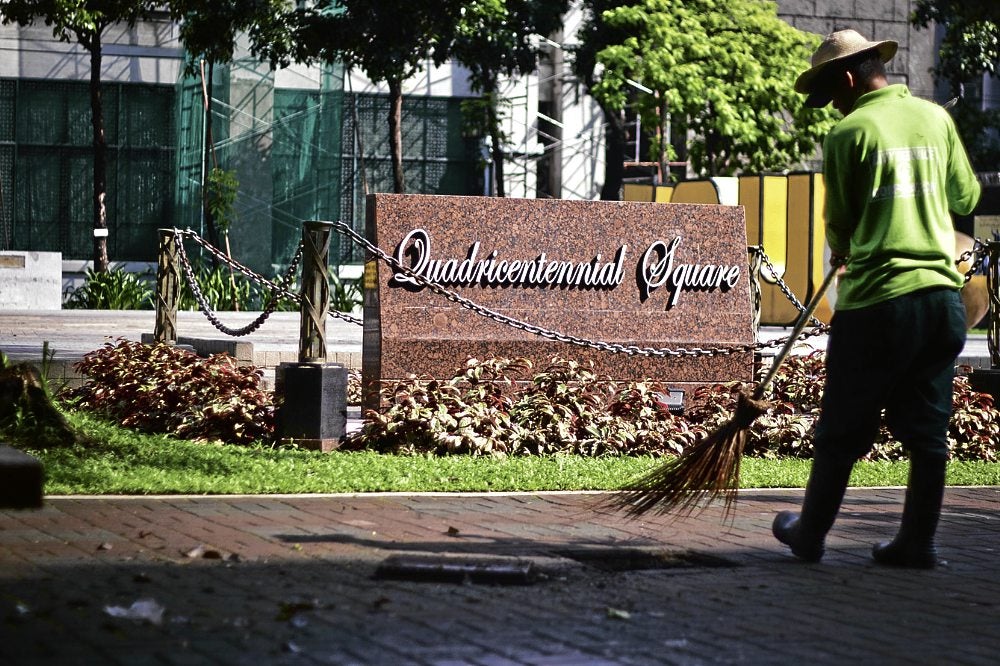 DECLARED a National Cultural Treasure and National Historical Landmark, the 401-year-old University of Santo Tomas, which went under water during the monsoon rains, hardly shows any sign of the ordeal it went through, as workers quickly clean up the campus. PHOTOS BY JOHN DANIEL J. HIRRO

After the deluge, now what?

Last week’s heavy monsoon rains revived memories of “Ondoy” in 2009, which had broken records, with a month’s worth of rain falling in just six hours.

Although not a typhoon, the monsoon rains affected and displaced some two million people. The death toll was not as bad as “Ondoy’”s, but the humanitarian disaster it caused was just as grave.

Lifestyle interviewed urban planners, architects and other experts on the factors that could have caused the calamity and the measures needed to solve them so as to stave off its repeat in the near future.

When “Ondoy” hit Manila a few years back, it was a wake-up call to many Filipinos. I remember, after “Ondoy,” several forums were conducted looking for ways to avert another “Ondoy” in the future. I was even invited to a forum in Keio University, Tokyo, Japan, where I spoke on “Paradigm Shift on the Pedagogy of Architecture Education in Relation to Climate Change.” I was surprised to hear from several speakers from different continents expressing surprise at the increasing incidence of floods, which they said surpassed even previously highest recorded levels. Several questions were asked during the forum and they would usually boil down to one issue: “What was the condition of your drainage systems?” or “Would the flooding have happened if the drainage systems of the city were working?” 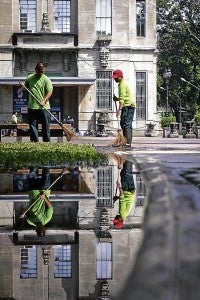 Honestly, I wasn’t sure. I do remember the tons of garbage piled up after the flooding,   clear evidence of poor solid-waste management which contributed to flooding. With all those fora, I believe a  solution must have been drawn.

The question is: Did the government listen?

Many local governments together with private groups started several cleaning of waterways in their cities. Relocation of many urban informal settlers has been done.

Education drives on proper garbage disposal have repeatedly been done. But unfortunately the Filipino has a very short memory and forgotten the lessons of “Ondoy,” becoming lax in implementing measures to quell flooding and check disasters.

The University of Santo Tomas has done its share by having its own waste-water-treatment plant and solid-waste management; it has a system of recycling rain water. It has also slowly adopted a no-polystyrene  policy in most of its buildings.

The UST administration has tried several times to lessen the impact of flooding on campus. It recently elevated its road network to prevent floodwater from immediately entering the campus. It worked for a while until the Department of Public Works and Highways (DPWH) started raising the roads around UST, making the campus a catchment area when the rain comes.

The UST administration has also adopted some policies with regard to ground-floor spaces on the campus. Slowly offices located on the ground floor have been moved to the next floor to avoid or lessen damage to property (files, records, equipment).

In a meeting, DPWH officials informed me they had presented to the university administrators a plan that would lessen the flooding inside the campus.

The approach is to build a huge underground cistern beneath the UST parade grounds with a size covering the entire field and several meters deep, which will collect rain water and eventually be pumped out to Manila Bay. Unfortunately the construction time is three years and the UST parade ground was recently declared a National Treasure.

Another approach suggested by some is that since most of the offices will be relocated to the second floor of the building, a covered walkway running throughout the campus connecting the building should be constructed, with its roof made of concrete; it will serve as elevated walkway during floods. 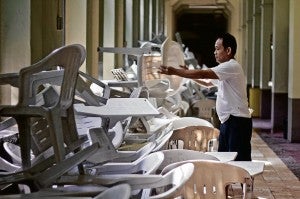 One must look at the flooding problem of Metro Manila as a whole to come up with a holistic solution. The approach of raising streets in the metro only displaces the water and does not really solve the problem.

President Aquino mentioned a few days ago that they had already a solution to the flooding problem of the metro. The next question is, How much, and how long?

I hope the solution is permanent and it will not take too long to implement. Meantime, as we wait for the solution, we have to adapt to the situation, further strengthening the resiliency of the Filipino.

My two cents’ worth is that we should learn lessons from history.

First: There had been urban plans before that discussed the matter, so we have to see that the zoning and easements from that time are still applicable today. 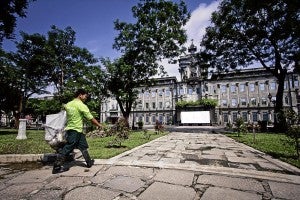 Third: If you are told to evacuate and you don’t, you should be considered a criminal for endangering more lives and adding to bad statistics.

Despite very destructive earthquakes, typhoons, floods, fire, volcanic eruptions, landslides, and rising water levels due to climate change, our cities, towns, and communities have been developed without urban planning, architecture, engineering, and other considerations for disaster prevention. This has led to a development that makes our communities, towns and cities highly vulnerable to disasters, as can be seen in the growth of urban areas where houses and buildings are built closer together; the lack or absence of open spaces; and the ubiquity of storage facilities for dangerous substances.

The wide use of natural propane gases and kerosene stoves has, and with the increase of high-rise buildings, large-scale underground shopping, poorly built public schools and hospitals, and automobile traffic, aggravated the potential dangers.

If Metro Manila and other cities are to be made less vulnerable to disasters, it is necessary not only to make the buildings safer, earthquake-resistant, flood-proof and fireproof, but also to improve the roads, open spaces, and parks that can prevent the spread of fire, while at the same time raise government’s—and citizen’s—preparedness for disasters. 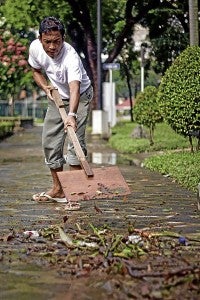 Furthermore, in the basins of creeks, canals, rivers, lakes and other bodies of water, urbanization has caused the lowering of the areas’ water-holding capacities, and the resulting increase in the amount of rainwater, mud and garbage flowing directly into these waterways has increased flood damages.

In addition to the improvement of these waterways, it will be necessary to prevent floods by implementing extensive measures to control the flow of rainwater, mud and garbage into them.

In 2009, with Dutch architect Daniel Roos, we forwarded to then President Gloria Macapagal-Arroyo and her Cabinet the following recommendations in the light of recent disastrous floods:

1. Build the spillway from Laguna Lake to Manila Bay.

11. Reforest the hills and mountains.

12. Revise subdivision regulations and other laws and restrictions.

14. Review Urban Metropolitan Management. (There are too many overlapping functions among agencies—local, metropolitan, regional and national agencies.)

17. Come up with hazard mapping for earthquakes, floods, fire and other hazards.

22. Provide funding for planning, design, construction, management and maintenance of buildings and infrastructures.

(The recommendations have been submitted to President Aquino.)

The events that recently transpired in our city and neighboring provinces is a wake-up call to the emerging havoc nature has in store to a hapless and helpless city like Metropolitan Manila.

Is nature to be blamed, or are we? What are the issues that concern us here? Firstly, nature is nature; it will follow its natural course. As we are in a tropical country where severe weather is a natural phenomenon rain and storms will come and go.

As most people interviewed stated, they are used to the rains and the floods, even though the waters are chest-deep and in some cases up-to-the roofs. As we cannot control nature, we should then control and look at the actions of man. There are various observations that need to be addressed here, and, sadly, some of these are very sensitive issues.

Why was there widespread flooding and misery?

Majority of those displaced by the floods belong to the urban poor.  Because they are poor, they suffered the most. The poor sadly live in dangerous areas where chances of flooding, landslides and others are ripe.

Where else can the poor live but in areas that the wealthy would not want to? These would be beside creeks, in trash areas, contaminated land, flood-prone areas and danger zones.

Relocation sites are being offered them, but there’s a catch: They have to pay a minimum amount to settle and eventually own the property. But why would they pay when they are living in slums virtually free? Added to this is the distance of the relocation sites from industries and cities where they make a living.

The urban poor do not have basic utilities. They dump everything and anything into rivers and streams. With a light weather change, a naturally flowing brook turns into a torrent. And that was what we saw.  Tons of trash accumulated on our vanishing estero. But where else can the poor go but in areas like estero that are dangerous?

About UST and what can be done to prevent flooding, there’s really a need to coordinate with DPWH.

UST should have protested the elevation of Forbes, Noval and Dapitan streets by a meter. The construction made UST a catch basin.

Flooding will be unavoidable, sadly, as Sampaloc District used to be a swamp. We can only mitigate flooding.

An expensive endeavor is to provide a dike system around the campus and a pumping system to throw or divert water accumulated to the drainage mains outside.