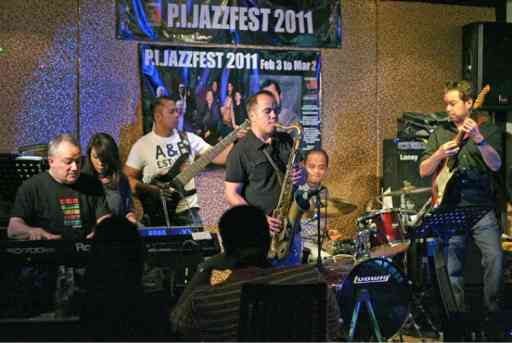 Kiss the Bride at PI Jazzfest

The Music That Just Wouldn’t Die

WAY back in the late Sixties, a reporter asked the jazz trumpeter Lester Bowie: “Is jazz, as we know it, dead?”

Bowie replied: “I guess it depends on what you know.”

Pundits have been proclaiming the demise of jazz since the late ’50s, but the music has always managed to reinvent itself, and survive, if not exactly thrive.

In the Philippines, jazz has always been at the fringes, at least since its late 1970s heyday when Birds of the Same Feather and Bacchus were Manila’s swinging hot spots. Jazz snobs might have reviled jazz fusion as a watered-down version of the real thing, but it was at least popular. Two radio stations played it, people bought the records, and the musicians were actual celebrities.

Since then, however, jazz has ceded the limelight to other, more vital genres. But it always kept the spark alive, underground, waiting to be fanned into flame by the right set of circumstances and personalities.

Unlikely as it may seem, that time may be now.

At a time when there’s a plethora of music genres for every taste – indie rock, electropop, Flip-hop (Pinoy hip-hop) and even a genetically-engineered clone of K-pop called “P-pop” – jazz is once again poking its grizzled old head out of its foxhole.

There’s been a lot of activity lately at the jazz front, such as it is: the recently-concluded P.I. Jazzfest drew more listeners than ever before, artists such as Mishka Adams and Kiss The Bride released new albums, oldtimers like Boy Katindig, Henry Katindig and Pete Canzon started playing again, and the club scene began to swing again.

“Yes, there is a resurgence, and the future looks really bright, so you gotta wear shades,” says Myra Ruaro a.k.a. Skarlet.

“It’s happening because some stubborn crazy people are making it happen.”

As proprietress and regular performer at the club Ten 02 on Timog Ave. (recently renamed Skarlet’s Jazz Kitchen in a moment of optimism), she ought to know. Although she first gained fame fronting ska ’n’ B outfits like Put3Ska and the Brownbeat All-Stars, Skarlet was always a closet jazz fan, haunting jazz joints like the old Monk’s Dream and finding side gigs with jazz outfits like JR COBB, before finally taking the plunge and reinventing herself as a full-fledged jazz chanteuse.

“To make my long answer short, I would summarize it this way—unity!”

She says the current resurgence has been percolating since the late ’90s, when jazz groups began to venture into rock venues like ’70s Bistro and Freedom Bar, finding new audiences and drawing old ones out of hiding. They began writing and playing original music again, and in the process generated a scene. That in turn drew younger musicians, leading to the present intergenerational band scene.

“From a rocker’s perspective, those are two key elements of a movement: small clubs where you won’t really make any money, and writing original compositions where you’ll make even less.”

But of course, financial gain was never the point.

“Naging masaya ulit, it made the jams and gigs accessible again,” she says. “Part of unity is also helping each other, musically and personally, like a brotherhood. Mentorship that would lead to leaving a good legacy… We need stronger unification to blur the lines of generational preferences and biases, and more openness to more original materials. The seniors should guide and mentor the younger jazzers. Hopefully, radio will give those making original music a chance to be heard.”

“I’m glad that there are a lot of new faces that I myself am discovering along the way. It keeps the tradition alive. I think UP and UST, as well as the Internet, have given a semblance of hope to the wannabes! These young cats are looking up to the likes of Mel Villena, Bob Aves, Johnny Alegre, Mishka, Skarlet, and of course Sandra and Jun [Viray]. Koyang and Zenaida Celdran are definitely at the forefront. Those who are making a comeback, like Jacqui Magno and Pat Castillo, are enjoying the attention and earning on the side as well.”

Quirino recently launched the third volume of his history of Pinoy jazz, “Contemporary Jazz in the Philippines: 1970 to the Year 2010,” itself a sign of the current resurgence.

“Here in the Philippines, jazz will never die as long as we keep the torch burning,” he adds. “That’s primarily why I wrote three books and made a documentary—to make everybody realize that we have a long legacy of jazz greats just waiting for their stories to be told.” •