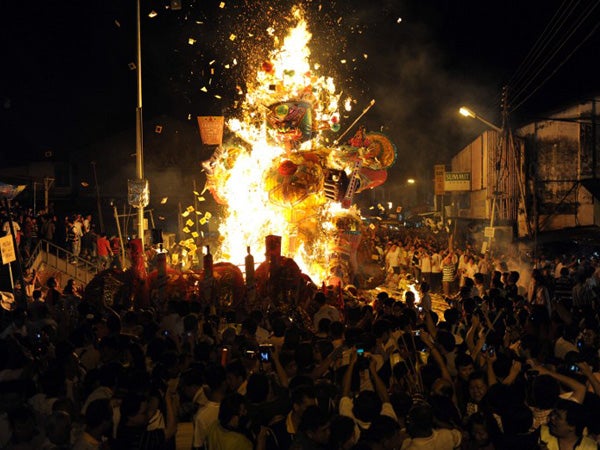 Singapore – Whenever Christina Tang is overseas and returns to her hotel room, she always knocks on the door before entering even if she is the only occupant.

The 25-year-old Singaporean marketing executive said knocking on the door is meant to seek permission from the “good brothers” – spirits that might have taken over her room while she was away – for her to stay over for the night.

“It’s just like visiting a friend. You would definitely not barge in without the courtesy of a doorbell or a knock on the door, right? To me, it’s just respect.”

Singapore might be one of Asia’s wealthiest and most well-educated societies, but quirky superstitions are part of daily life in the predominantly ethnic Chinese city-state.

Superstition comes to the fore during the month-long Hungry Ghost Festival, which began on Friday.

Chinese superstition holds that the gates of hell are opened for spirits to wander across the mortal realm before they return to the underworld.

During the month, property sales fall because it is considered inauspicious to make major purchases, and people refrain from staying out too late to avoid otherworldly encounters.

Noisy streetside shows called “getai” featuring professional singers are staged to entertain the visiting spirits – but don’t sit on the empty front seats because they’re reserved for the invisible guests.

Traffic jams are typically caused not only by crumpled cars obstructing traffic but also by drivers slowing down to take note of the license plate numbers so that they can bet on them in the hugely popular four-digit lottery.

Having bird droppings land on your head is also seen as a good omen for gamblers because it’s so rare for one to be hit in the concrete jungle.

A tree in a western suburb has attracted a following due to the likeness of a monkey on its bark, which believers say resembles that of a deity from Chinese mythology.

The “Monkey Tree” drew so much attention at one point that authorities had to explain to a local newspaper that the visage was a” natural” response by the tree to various “minor accidents over the years.”

— The “advantage” of superstition” —

Even national icons are not immune to superstition.

Operators of the bayside Singapore Flyer, said to be the world’s largest ferris wheel, reversed its spinning direction in 2008 so that it revolves towards the financial district and not the sea.

Masters of feng shui – the ancient practice of balancing energies in any given space to attract good fortune – advised them that the wheel’s revolution should bring fortune into Singapore, not suck the good luck away.

Superstitious practices are often mistakenly associated with religion in Singapore, where many Chinese are followers of Buddhism or Taoism, said Chung Kwang Tong, a high priest with the local Taoist Federation.

“The religion itself does not have such practices,” he told AFP. “A lot of them will just try because to them there is no harm in trying.”

Ang Swee Hoon, a sociologist at the National University of Singapore, said even well-educated people resort to superstitious practices because of the highly competitive environment in Singapore.

“Hence, to get a leg up, Singaporeans engage in more activities that will give them an advantage. Superstitious behaviors seemingly offer that,” Ang said. “So, instead of superstitions being irrational, it may be perceived as rational.”

Red underwear is seen as sexy in many countries, but to Singaporean gamblers, it’s just another way of attracting good fortune because red is regarded as a lucky colour among Chinese.